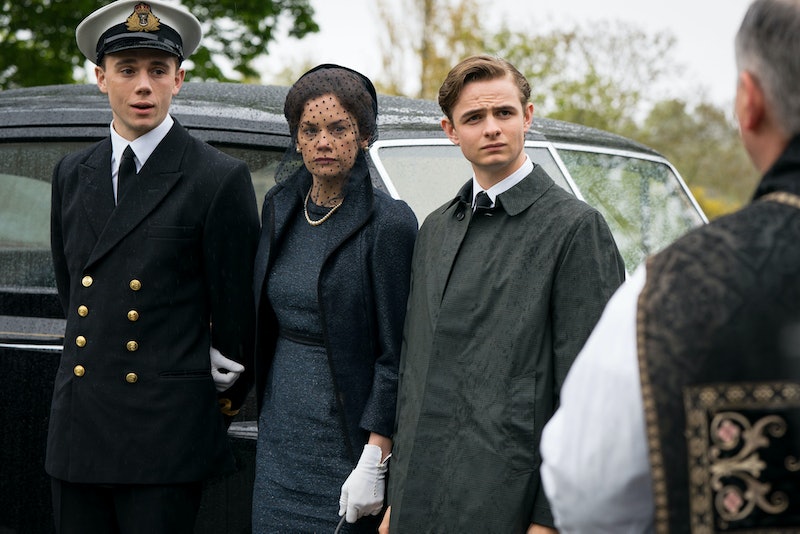 Ruth Wilson — one of British TV drama's best faces — is back to give goosebumps to viewers all winter long. She's the star of new BBC drama, Mrs Wilson, in which she'll be playing her own grandma — Alison Wilson — one of the four wives to be married to World War II spy Alexander . The casting couldn't be more genius. Wilson's joined by some emerging British talent, including a Mr Otto Farrant. No doubt, as you watch Mrs Wilson, you'll want to know who plays Wilson's son. So, who is Otto Farrant, the actor playing Nigel Wilson?

Remember this boyish face, 'cause you're gonna be seeing a lot more of it soon. You might have seen a younger Farrant back in the day, when he took up the role of Petya Rostov — the youngest of the Rostov family — in BBC's incredible 2016 adaptation of Tolstoy's War and Peace. According to his IMDB page, Farrant made his big screen debut when he acted alongside Ewan McGregor in 2011's Salmon Fishing in the Yemen. Farrant's been more of a regular to the stage than the screen, though, and in a 2016 interview on the Young Vic website, he says his favourite play is John Ford's 17th century tragedy 'Tis a Pity She's a Whore.

In 2016, Farrant tied himself to his friend while trying to cook up a show for that year's Edinburgh Fringe. Their bondage experiment resulted in Spool, a pretty #deep exploration into how dependent the mind is on the body, and what happens when that relationship goes awry. Actually, it sounded pretty cool.

All in all, Farrant seems to be a bit of a theatre nerd — in the very best way. He played Robin in a production of Shakespeare's The Merry Wives of Windsor at The Globe in 2008, making it his first role, at just the age of 11, according to an interview with Not Quite A Yummy Mummy. And, according to his bio on The National Theatre's site, he's starred in some other classics, including Tennessee Williams' A Streetcar Named Desire, and the downright disturbing Oedipus.

Farrant's role as Nigel Wilson might have the highest stakes of them all, though. This might muddle your brain, but just bear with me for a sec. So, actress Ruth Wilson is playing her grandma in the show — you've got that — but Nigel Wilson takes his name and character from Wilson's IRL father. It's a bit of a mind bender, having the young Farrant playing Wilson's father, but he slinks into the role so well that you won't feel muddled for too long. Though in an interview with The Times, Wilson herself did remark that it was at times pretty challenging for her. “There were moments when I thought, ‘I’m giving birth to my dad. This is so weird,’” she told the newspaper. "I thought, ‘Oh my God. I’ll need therapy after this.’"

I imagine you'll also want a casual gander at Farrant's socials while you're at it. Well, I've done all the work for you. Here, have a gander of his Twitter — I mean, he literally hasn't tweeted at all, but there is a seriously pretty headshot of his to gawk at. Unfortunately, he doesn't seem to be very committed the Gram either, as there are no public accounts of Farrant's to be found. Maybe it's just as well — you won't wanna miss a single second of his performance, so keep eyes off that phone.