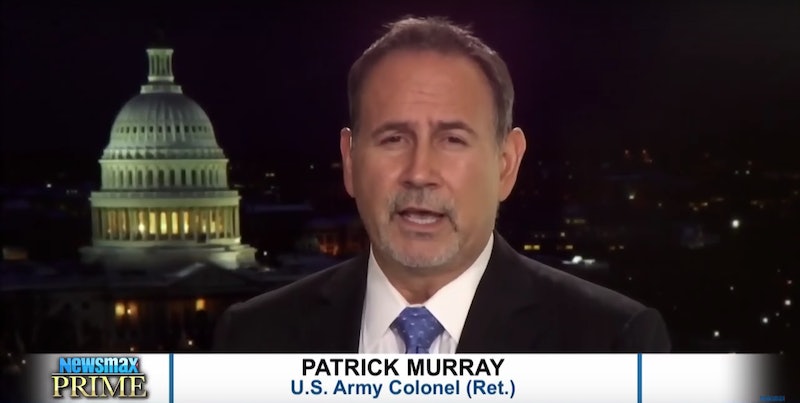 The Trump administration still has thousands of positions to fill in the federal government. To make matters worse, 243 of the 492 people that President Trump has nominated are still awaiting confirmation. One of those 243 people is Patrick Murray, who may become the U.S. Alternate Representative for Special Political Affairs at the United Nations. A CNN investigation published Monday reveals that he is yet another controversial pick from Trump: Murray has repeatedly shared incendiary memes on social media and praised right-wing provocateur Milo Yiannopoulos. Bustle has reached out to Murray for comment.

As an alternate representative for the U.N., Murray would serve and sometimes fill in for Ambassador Nikki Haley. Trump nominated him to the position — which would designate him as an ambassador — on Aug. 3. He's already been confirmed by the Senate Foreign Relations Committee, but not by the Senate at large.

CNN found that Murray has often posted memes on his Facebook account that come across as troubling. In one post, for example, he likened being a Democrat to having a "mental illness." He also shared several memes about past Democratic presidents: An image of Bill and Hillary Clinton portrays Bill asking her, "While you're in prison I'm free to date, right?" In another, Bill asks, "Is Bruce Jenner a woman yet?"

Yet another shows Barack Obama shaking hands with civil rights activist Al Sharpton while a town burns in the background; overlaid are the words: "It's amazing what you can accomplish when you work together!"

Murray also used Facebook to repeatedly express support for ultra conservative Yiannopoulos. He often shared Yiannopoulos' work, along with comments like "Milo rocks" and "Quick, snowflakes, run to your safe space! Preach, Milo!" When Yiannopoulos made a video advocating that Britain exit the European Union, Murray shared it, adding, "Clone this guy."

Twitter permanently suspended Yiannopoulos' Twitter account in July 2016 after he repeatedly used it to post hateful messages. Among other offenses, Yiannopoulos had reviewed the movie Ghostbusters with a racist comment about actress Leslie Jones. He called it a "film acting as standard bearer for the social justice left … full of female characters that are simply stand-ins for men plus a black character worthy of a minstrel show" and inspired many Twitter users to attack her. Murray defended Yiannopoulos after the incident, writing, "Who thinks he would be slapped with a permanent Twitter ban if he was a gay liberal instead of a gay conservative?"

Murray has worked in government before; he was an adviser to the State Department's Bureau of Political Military Affairs in the early 2000s and briefly acted as the U.S. Military Representative to the U.N. Military Staff Committee. He's also an army veteran who served in Iraq, Bosnia, Kosovo, Belarus, and Russia, among other places. Furthermore, he's authored a recent book Government Is the Problem, and campaigned to represent Virginia's 8th congressional district in 2010 and 2012 before losing twice to Democrat Jim Moran.

If support for Murray's confirmation falls along party lines, Democrats will not be able to block it: They hold 48 seats in the Senate to the Republicans' 52. Even if Democrats filibuster, Republicans will be able to overcome it with 51 votes. However, if all Democrats vote no and filibuster, Doug Jones wins the Alabama special election on Dec. 12, and at least one Republican defects from supporting Murray, the nomination would be blocked.

The hearings for Murray have not been scheduled yet, but they are near the top of the Senate's executive calendar and should take place in the near future.