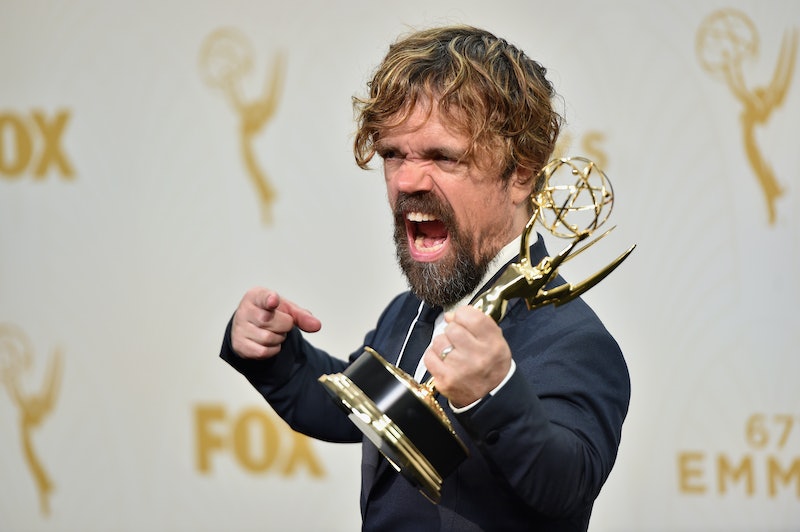 Peter Dinklage is trading in dragons and white walkers for superheroes and Infinity Stones in Avengers: Infinity War. The actor has been confirmed as part of the cast for the upcoming Marvel Cinematic Universe movie for over a year, and yet nothing about his character has been confirmed, leaving fans to speculate as to who Peter Dinklage's character is in Infinity War. Even in the days leading up to the release, the role was being kept under wraps, and fans failed to come up with a consensus on who they speculate Dinklage plays in the film.

But now we know the truth. Minor spoilers ahead! In Infinity War, Dinklage plays the giant dwarf King Eitri. Back in early 2017 when the movie was still filming, users on 4chan posted that Marvel was looking at Dinklage for the role of Eitri, the King of the Dwarves of Nidavellir, one of the Nine Realms Asgard ruled over. As reported by ScreenRant, Eitri is best known as the character who forged Thor's hammer — you know, the one destroyed by Hela in Thor: Ragnarok.

In the film, however, Eitri is slightly different than in the comics. For one thing, he is explicitly credited as the forger of the Infinity Gauntlet worn by Thanos, something never confirmed in the books. As the maker of the Infinity Gauntlet, it makes sense that Eitri would fit into the film, both as an ally and a target for the Avengers as they try to grasp their newest foe.

Up until the Sunday before the film's release, though, many fans believed that Dinklage was playing Corvus Glaive in Infinity War. Corvus is one of Thanos' children and a member of the Black Order, Thanos' team of alien warriors. Speculation ramped up when Anthony Mackie (Falcon) appeared on Good Morning America in mid April and premiered an Infinity War clip that featured Corvus. The character, obscured by special effects (the role is performed in motion capture), doesn't look like Dinklage, but Corvus' voice saying one line, "I can't," did sound a bit like him.

Still, some fans hesitated before assigning the role to Dinklage, citing an interview for JOE.ie in which Infinity War co-director Anthony Russo promised that fans would "certainly recognize [Dinklage]." But thanks to his role on HBO's Game of Thrones, Dinklage's voice is considered pretty recognizable, and so some people jumped to declare the mystery of Dinklage's role in Infinity War solved. Alas, just a few days later, their theory was debunked during a press junket for the film, where it was confirmed that actor Michael James Shaw (Roots) is actually playing Corvus.

There was also a popular theory that Dinklage would be playing Pip the Troll. In early 2017, Dinklage was spotted leaving a salon with red hair, sparking rumors that he would be playing the character, who has that hair color. Pip the Troll is on the peripheries of the MCU, appearing as an enemy of Adam Warlock, a character hinted at in the end of Guardians of the Galaxy, Vol. 2.

But as we know now, Dinklage didn't end up playing Pip, but Eitri. When fans looked at the trailers for Infinity War, they came up with a few ways that Eitri could've fit into the narrative. Some people theorized that Thor would go to Eitri to ask for a new weapon after Thor: Ragnarok, pointing specifically to a shot in the trailers that shows Thor standing in the middle of two giant rings.

As Eitri, Dinklage only appears in one significant scene, but even just that one scene is enough to make the actor a member of the MCU. And who knows when he might come back. Can you say "spinoff"? Let's certainly hope so.