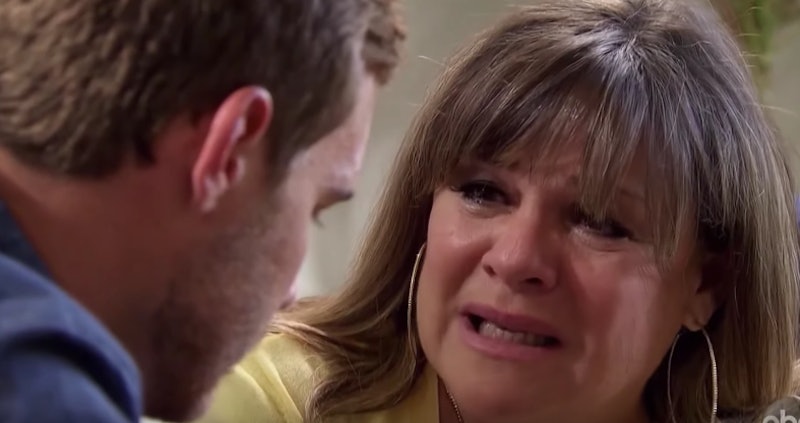 This Bachelor season's super tease is almost more captivating and mysterious than Colton Underwood's fence jump last year. In it, Peter learns something mysterious at the last minute, he cries on a bed, Victoria F. pushes a camera person away and then, in a dramatic climax, Peter's mom is crying to him, pleading with him to not lose ....someone.

"Don't let her go," she begs a visibly concerned Peter. "Bring her home to us." Barb is obviously distraught and given that Peter seems to have second thoughts in the final episodes (and all the women in the trailer walking away or claiming that they just can't take any more), it's possible that she's crying over someone in particular that he brings home and his family falls in love with. There's also speculation that Peter hasn't actually finished filming and that she's talking about his ex-girlfriend Hannah Brown. But we do know one thing.

"It's in the last week," Peter told Entertainment Tonight when Lauren Zima asked him about the powerful exchange with his mom. Chris Harrison, who was also present for the same interview, chimed in. "She's nominated for a Golden Globe, by the way," the host laughed. "That's the thing, Peter is so close to his parents. His parents play a big part in this as well, and their emotion and all that is captured, you're going to see it."

So who is she crying over then?

No One At All

If you're a longtime fan of The Bachelor, you're familiar with the possibility of trailer trickery, in that there have been instances where something dramatic in the teaser ends up being a lot less compelling than it sounds. So it's possible that she's not talking about anyone in particular, and is just very invested in Peter finding the love of his life.

One Of His Finalists

Peter is confident that the season's ending will be a surprise, which is a bold claim, considering the endings to most seasons are usually a Google search away. But that's not the case this time around, which makes it harder to figure out the source of Mrs. Weber's tears.

However, if her emotional conversation takes place in the final week, there's a good chance it happens after hometown visits, when Peter presumably chooses two finalists to meet his family, as Bachelors have done in seasons past. TV blogger Reality Steve seems to know who those two women might be, meaning Peter's mom could be crying over one of them.

The trailer also displays a few moments of an upset Peter, who seems at a loss for what to do. This could indicate that he has second thoughts after ending things with someone (be it a contestant he already sent home or Hannah B.), and he ultimately seeks counseling in his mom, who tells him to "bring her home."

In reality, Mrs. Weber could be talking about anyone, but fans are really hoping it's Hannah B. Given that no one knows how Peter's season will end, some people think that Peter ends up dating Hannah B. at the end. Maybe once Dancing with the Stars wrapped, Peter realizes that Hannah is free and wants to be with him and that's what leads to all the tears and drama.

Others think that Barb really liked Madison from when he brought her home on their first one-on-one date and is just dying for him to bring her back for dinner.

And a select few are hoping that her tears have nothing to do with Peter's love life, but instead, are for a potential rescue dog.

At this point, anything could happen. A puppy wouldn't be a bad way to end the season, though.