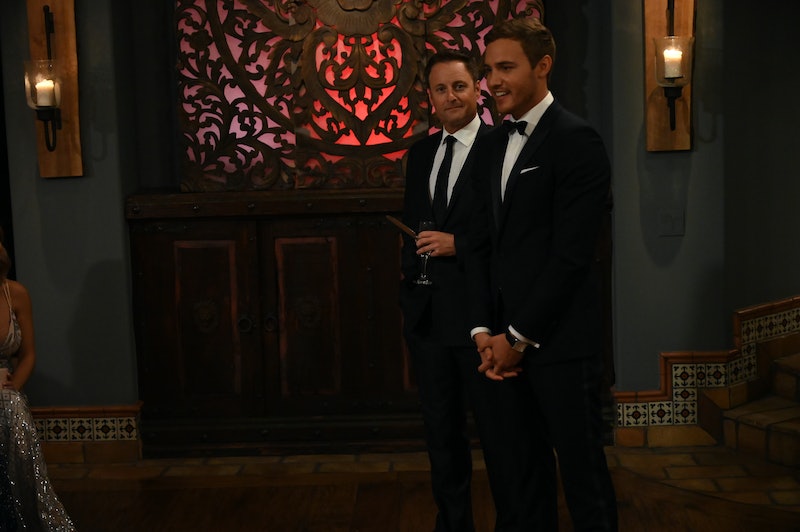 If you lined them up next to each other, the latest interview comments from Peter Weber and Chris Harrison could be a trail of breadcrumbs to an unspoiled ending of The Bachelor. In their own coded, dramatized way, they've hinted that filming for Peter's season hasn't ended yet, which could mean that, as it stands, no one has received a final rose.

How does that work? What does that mean? No one knows for sure. It could mean a number of things. Peter could still be dating one (or both) of his final picks from the show, he could've changed his mind about Hannah B. and gone back for her (let's be honest, that Night 2 conversation oozed a sense of longing), or he could've walked away as single as the day filming began.

The comments made so far could hint to any of those outcomes, or an entirely different one. Thankfully, there's a whole season left to speculate. But this is what they've said so far.

Harrison Said "It's Possible" That The Season's "Still Not Over"

Scheduled filming may have ended, but Peter's decision on a future wife could be ongoing. Ahead of the season premiere, Harrison told Good Morning America that this season is "unlike any other" and "you truly aren't gonna know how it's going to end until the very end." Then he added a crucial last few words. "It's possible," he said, "it's still not over."

Peter has also made it clear that he went into this process without feeling pressured to make a proposal. "I never made that like an ultimatum like, it had to happen that way and if it didn’t, it was going to be a failure. Not at all," he told People. "I needed everything to be completely real and not forced. I was always going to be true to myself no matter what."

Harrison also told The Hollywood Reporter that there isn't a sure front-runner by the season's end. "It’s a wild, turbulent ending. You won’t predict how this comes to a conclusion. It’s not one of those endings where you go, 'Oh, this is the one. And this is this great, crazy long love story and she’s always been the one since the beginning. And it’s so simple and beautiful.'" he said.

Peter Is Confident That The Ending Is Un-Spoilable

Potentially because it hasn't happened yet. In Bachelor Nation, where the endings of most seasons of The Bachelor and Bachelorette have been one Google search away, that's a pretty big claim. And if Peter is so sure about his finale being a surprise, there's a good chance that's because he's keeping it (and possibly a ring?) in his back pocket until the time is right.

"I’m very confident that no one is going to be able to spoil it," he told The Hollywood Reporter. "There’s a reason I believe that — and obviously I can’t say it, otherwise it gives it away. I’m very confident that Reality Steve and all of these people, they’re not going to find out what happens — there’s no way they’re going to find out. And I’m very excited about that because I think that’s what this show has wanted for a while and I’m excited that for my season there’s a really good chance that happens. And I’m excited for everyone to just come along for the journey and not know what happens at the end, and just be able to live it out with me."

THR asked him if that meant his ending is still playing out. "You’ll have to tune in to find out!" he said.

Reality Steve Has... Some Thoughts About The Ending

Even the spoiler machine himself is stumped about Peter's fate. "My thinking is the reason [Peter is] so adamant [about an unspoiled ending] is because whatever the ending will ultimately be to this season, that part hasn’t been filmed yet," he wrote in a blog post. "I can’t spoil something that hasn’t happened yet. Now, WHAT that something is, I’m not totally sure of."

Peter Has Not Confirmed His Post-Filming Relationship Status

Peter has only said that he's "happy," which is the safe, generic answer. "It's been crazy. I mean, with all of the excitement around it and, people want to know, and obviously you have to live a secret of what's going on. It's unique," he told The Hollywood Reporter. "I couldn't have predicted it to go the way it did, but I can tell you that I'm very happy."

This is definitely a new approach to the old ways of The Bachelor, which is something fans have wanted for a while. Here's to hoping that the ending, whatever it is, is worth the wait.