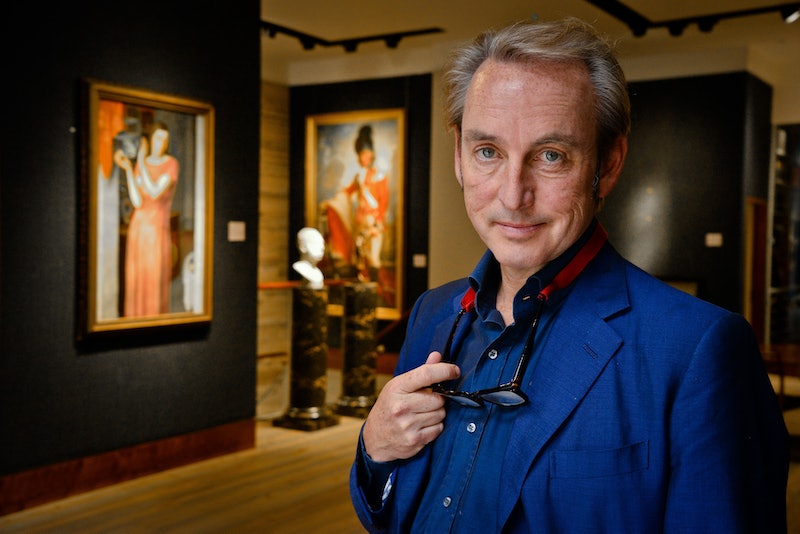 The BBC's Fake or Fortune sees TV presenter Fiona Bruce and renowned art dealer Philip Mould set out to discover the origins of the British public's most cherished artworks — and ultimately determine their authenticity. The show first premiered way back in 2011, and the brand new eighth series arrives on BBC One this week. But what else is there to know about the Fake or Fortune hosts? Fiona Bruce may be a well known presenter outside of the show, but who is Philip Mould, the show's resident expert? Here's everything you need to know about Mould.

According to The Sun, Philip Mould is a British art dealer, writer and broadcaster. He was born in 1960, and attended Kingsmead School in Hoylake — and later studied History of Art at the University of East Anglia. Mould's interest in the world of antiques began at an early age, and after befriending the owner of an antiques shop at just 11 years-old, he quickly learned the tricks of the trade. Mould began dealing art throughout his teenage years, and sold artwork to a variety of prestigious institutions, including New York's Metropolitan Museum of Art, the National Portrait Gallery, and the Royal Albert Memorial Museum.

Mould later embarked on a career in television, and has previously appeared in Channel 4's Changing Faces and the BBC's Antiques Roadshow. As mentioned previously, the art dealer has presented Fake or Fortune alongside co-host Fiona Brice since 2011 — a show he helped create along with its producer, Simon Shaw.

According to the BBC, Mould's most intriguing artistic discovery was actually his very first, and the moment arrived after he purchased a fairly basic portrait for just £180. After some digging, he discovered that the piece was in fact quite special, and the TV host went on to sell the picture for a whopping £12,000. After this impressive start, the sky was the limit for Mould's now 25-year-long career — and the broadcaster was later appointed as the official art adviser to both the House of Commons and House of Lords.

As mentioned previously, Mould will once again star alongside co-host Fiona Bruce in the investigative art series, Fake or Fortune. Speaking back in 2016, the BBC host shed some light on his working relationship with Bruce. During an interview with the Daily Mail, he said, "What's really good though is we've worked together for so long that, rather like a long-term relationship, there's an ease and pleasurable fluency about the sort of discussions and thoughts we have." In the interview, he went on to praise Bruce's "sensitivity" — as well as her ability to ask "the important questions."

According to The Sun, the eighth series of Fake or Fortune starts on BBC One at 9 p.m. on Thursday, July 25, and will air for a total of four one-hour episodes. The new season will once again follow the BBC presenters as they set out to discover the origins of artworks submitted by members of the British public — and I don't know about you, but I'm really looking forward to finding out what the co-hosts will discover this time around.