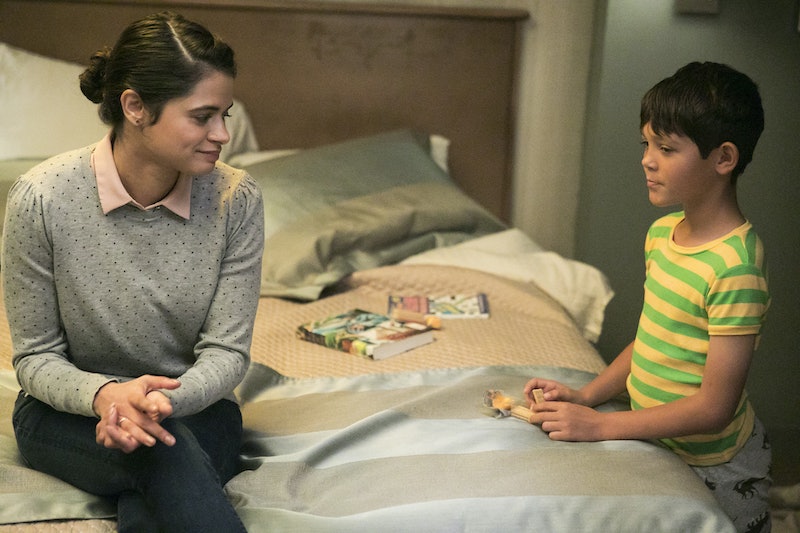 Following Togetherness’ series finale last year, the Duplass brothers return on Friday with Room 104, an anthology series set entirely in a single motel room. First up in its series of stories is "Ralphie," an unnerving tale of a starry-eyed girl whose babysitting gig goes awry after the arrival of a violent second child named — you guessed it — Ralphie. He's initially an unseen figure, but as the episode presses on, his presence becomes increasingly overbearing. So, who is Ralphie in Room 104, and what exactly does he want? Spoilers for the premiere episode of Room 104 ahead.

Ralphie can be seen through two frameworks: through the eyes of Meg, the babysitter, and from the perspective of the kid she's watching, whose name is simply Ralph (no "ie," that distinction is important). When Meg first arrives at the motel, it's clear she doesn't know Ralph or his dad, Bradley, personally. "Did you want to see my references?" she asks, forebodingly. "No, it's OK. You seem like a nice girl," Bradley responds.

It's an odd setup, because Meg doesn't even get a chance to meet Ralph before Bradley leaves. He tells her Ralph is in the bathroom and that he's a little shy, but that he has an active imagination.

After some coaxing, Meg gets Ralph to come out, and he seems like a sweet, mild-mannered boy, albeit a bit strange. He tells her his friend, Ralphie, is in the bathroom, but that he has a temper, so she should stay out and be careful not to upset him. Meg, thinking Ralphie is just an imaginary friend, invites Ralph to eat some pizza and watch TV with her. But then, when Meg says it's time for Ralph to go to bed, things go downhill. Meg calls out to Ralphie, provoking him, and after Ralph goes in to talk to him, Ralphie — who looks just like Ralph but dressed in underwear and a cape — bursts out screaming "I'm gonna get you!" He charges at Meg, ransacks the room, and runs back into the bathroom.

Later, after Ralph has returned, he begins telling Meg about his mother. He says his dad tells people that she died by suicide, but in actuality, Ralphie killed her. Ralphie again overhears and becomes enraged, and when Ralph goes in to talk to him this time, Meg hears clattering and breaking glass. She calls Bradley and then 911.

To Meg's surprise, both Ralph and Ralphie then emerge from the bathroom and start fighting. Ralphie overtakes Ralph and seemingly smothers him with a pillow, killing him. He then turns to Meg and bashes her head into the ground, but she gets the upper hand and starts strangling him. That's when Bradley walks in.

Pan back to the bed, and Ralph's dead body is nowhere to be found. Meg looks down to discover she's strangling Ralph (identifiable because he's in a green and yellow striped t-shirt, not a cape), making it appear that there never was a Ralph and Ralphie and she was just experiencing some sort of hallucination or delusion. A confused Meg tries to explain, but then begins laughing maniacally. In the background, the bathroom door slams behind her.

The episode is left open-ended. Was it a nightmare? Was Ralphie real? Or has Meg flown off the handle?