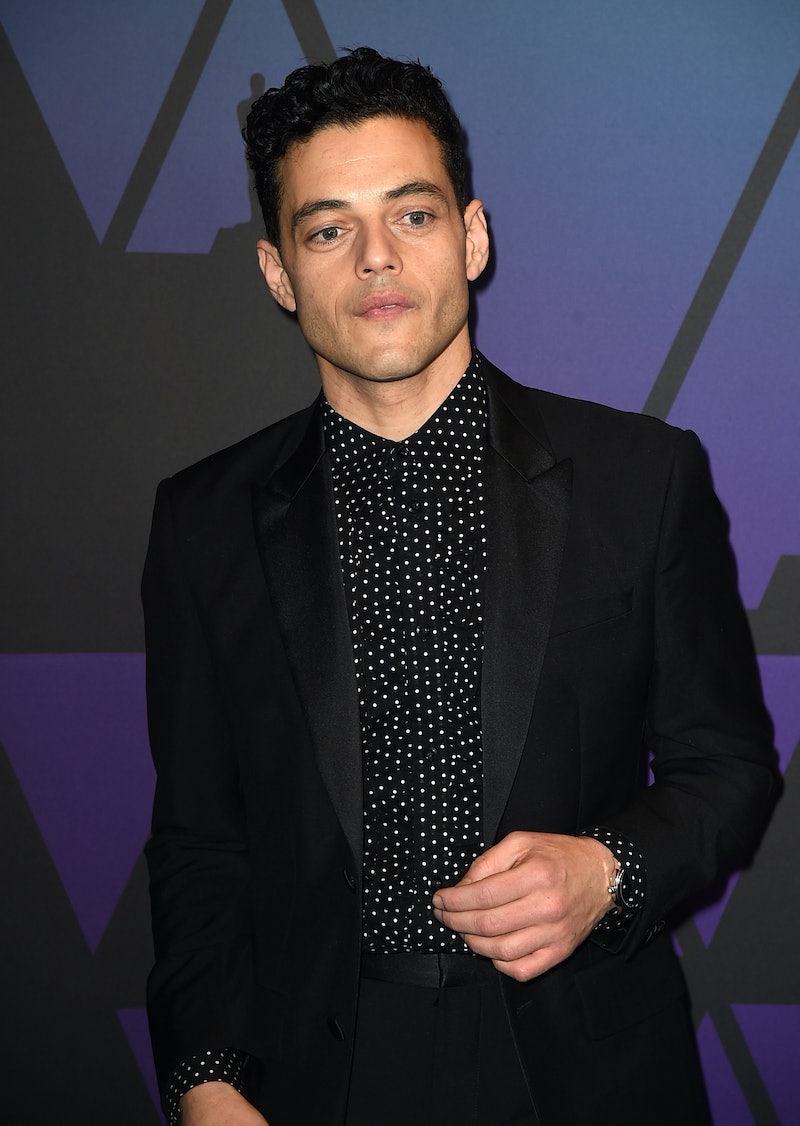 Awards season 2019 is here, and it's kicking off on Jan. 6 with the Golden Globes. Each year there are some actors who really make the rounds, and this time that prestigious group includes Rami Malek. Given that he's going to be seen walking the red carpet a few times, you might be curious as to whether Rami Malek is dating anyone. After all, he'd either be spotted with them at the award shows or they would be "notably absent" — both of which are of the utmost important to the celeb-following world!

So far, Malek is nominated for a Golden Globe, a Screen Actors Guild award, and a Critics Choice award for portraying Queen frontman Freddie Mercury in Bohemian Rhapsody. In response to his Golden Globe nomination, Malek told Entertainment Weekly, "It’s great to be recognized in this way. It’s been so many years in the process and to have it culminate in not only myself but the film being recognized is such a tremendous honor and speaks to the level of work that everyone who was a part of this film brought to it." He also added that since he was in London at the time, he hoped to celebrate by taking Queen members Brian May and Roger Taylor for a drink.

It's possible Malek will just end up showing up to awards season events with those two (they both served as executive music producers on the film) or with his Bohemian Rhapsody co-stars, but is there anyone in his life... romantically?

Well, they haven't really spoken about it themselves, but there have been plenty of reports that Malek is dating his Bohemian Rhapsody co-star Lucy Boynton, who plays Mercury's ex-fiancée and lifelong friend Mary Austin in the film. It was first reported that they were dating in April 2018. At the time an "insider" told Us Weekly, "He is so into her. He goes and visits her in London all the time." Since then, they've gone to clubs in Notting Hill and had "day dates" on Rodeo Drive. In November, they attended the Governors Awards together, which is held by the Academy of Motion Pictures Arts and Sciences.

The only possible comment from Boynton or Malek on the matter is in an Instagram post Boynton shared in April 2018 after she got her wisdom teeth removed. She wrote in the caption, "Lost some wisdom today but the upside is ma boyfriend’s gonna be gettin a jazzy homemade necklace for his bday." Was Malek the boyfriend?? If you spot Rami Malek wearing a wisdom teeth necklace, that will be all the proof anyone needs.

But back to non-teeth related evidence, if they're attending Oscars-related events as a pair, it seems likely that, if they're still on good terms, they will be seen together this awards season. And, since the actors are not ones to be outspoken about their relationship, the fact that they're co-stars is a convenient way to still keep things focused on the film when they show up places together. But, hey, maybe if Ramek wins an award, he'll use the moment to give Boynton a shoutout in his speech — in a clear, publicly defining-the-relationship way.