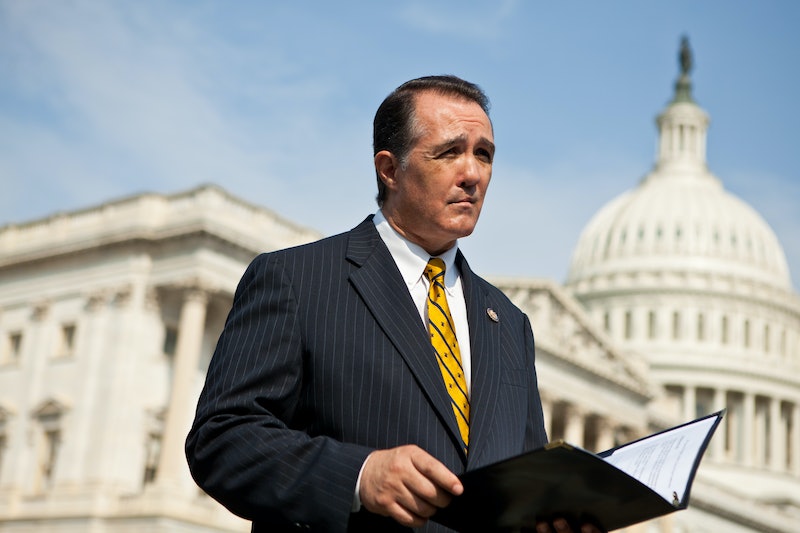 Amid the GOP's domination of non-presidential elections throughout the Obama era, anti-choice policies have taken hold in Republican-led states across the country. Whether by way of so-called TRAP laws (targeted regulation of abortion providers) that curtail access by burdening and shuttering clinics through unnecessary requirements, or by way of overt bans based on fetal gestational age, the battle over women's reproductive rights is as urgent now as ever. And there's a Republican congressman taking center stage whose name you should definitely know: Arizona representative Trent Franks, who is co-sponsoring a bill banning abortion after 20 weeks into pregnancy.

Franks, 60, first joined the House in 2003 as the representative for Arizona's 2nd congressional district, and then successfully ran to represent its 8th congressional district in 2013. Back in 2011, he introduced a measure that would have cut the window for women to receive an abortion from 24 weeks to just 20 weeks, much the same time frame he's pushing for now.

To say that he's a fervently anti-choice Republican would be an understatement. A Christian and a member of the religious right, Franks has been rated as one of the most conservative members of Congress in Washington today, and has long been an aggressive opponent of women's reproductive rights.

In the past, he's voted to ban federal health coverage that would provide abortions, voted against stem cell research that would utilize human embryos, voted for restricting the transport of minors across state lines to receive abortions, and obviously, has advanced legislation to ban abortion after 20 weeks of pregnancy. Also, as detailed by OnTheIssues.org, Franks described abortion as the "greatest human holocaust in the history of mankind" on his campaign website in 2002.

All of us must ask the central question. Does abortion kill a baby? If it does not, then it is a non-issue. If abortion does kill a child, then you and I are living in the midst of the greatest human holocaust in the history of mankind. Ultimately, if we as a society cannot find the will or the courage to protect mothers and their unborn children, in the final analysis, we will never truly find the courage to protect any kind of liberty for anyone.

Back in 2011, Franks dismissed Democratic concerns about women being impregnated through rape or incest as unimportant, claiming that such pregnancies were very rare, as The Washington Post reported.

Before, when my friends on the left side of the aisle here tried to make rape and incest the subject — because, you know, the incidence of rape resulting in pregnancy are very low.

Franks' remarks on rape and incest are not uncommon in far-right anti-abortion politics. In fact, they foreshadowed the infamous, potentially election-losing comments Missouri senate candidate Todd Akin would make in 2012. In a debate with Democratic incumbent senator Claire McCaskill, Akin claimed that a woman's body "has a way of trying to shut that whole thing down," meaning pregnancy, in the event of a "legitimate rape."

All in all, Franks has earned a zero percent rating from NARAL Pro-Choice America, indicating that he's as opposed to women's abortion rights as its effectively possible for a member of Congress to be. Conversely, National Right to Life has given him a 100 percent rating for his anti-abortion politics.

In short, Franks is about as strident a voice on these issues as anyone the GOP has to offer, so it's no surprise that he's co-sponsoring this bill. The other sponsor is 52-year-old California representative Kevin McCarthy, who announced earlier this week that the bill will be brought to the House floor for a vote.