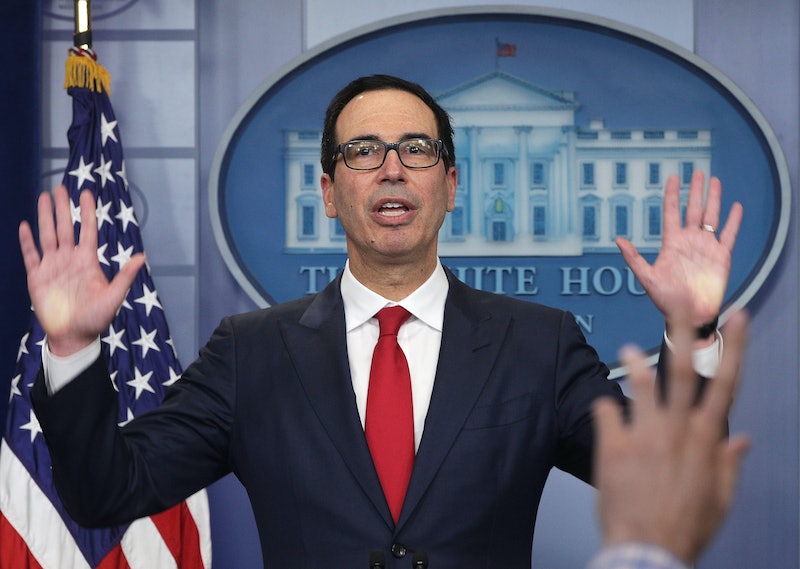 On Saturday, a package of gift-wrapped horse manure was left outside of the home of Treasury Secretary Steve Mnuchin, as a Christmas gift from "the American people." While the debacle originally baffled law enforcement officials and even the Los Angeles Police Department's bomb squad, the man who says he left the box of horse manure for Mnuchin, Robby Strong, has come forward.

Strong, a psychologist for Los Angeles County's Department of Mental Health, took full ownership of the prank, even though he admits that the act could jeopardize his job. On Saturday, before delivering the "gift," he even solicited help for his scheme on his personal Facebook account, and included photos of himself shoveling and boxing poop.

"I need someone to ride along and document my Secret Santa project," Strong wrote on Facebook. "I'm going to hand deliver boxes of horse shit to Steve Mnuchin over in Beverly Hills. Because if money is free speech, so is horse shit." He went on to say that the prank would help him to "go down in the anals [sic] of history ... Totally owning this one."

Strong told AL.com that he decided to go through with the idea to raise awareness to the American people that "Republicans have done nothing for the American worker."

In an interview with local public radio station KPCC, Strong said that he doesn't regret his actions; in fact, he compared himself to Jesus and considers his smelly gift a noble act.

What I did, I would like to compare to what Jesus did when he went into the temple and overturned the tables of the moneychangers, who were exploiting the people financially in the name of religion. I feel like that's what the GOP has done to the American people.

Strong had particularly negative feelings about the GOP's recent passage of the Tax Cuts and Jobs Act, which gave sweeping tax cuts to the wealthiest Americans. In fact, he even included a reference to the bill in the note he included on Mnuchin's gift.

We're returning the "gift" of the Christmas tax bill. It's bulls‑‑‑. Warmest Wishes, The American People.

Mnuchin, a wealthy businessman and former Goldman Sachs executive, was a proponent of the GOP tax bill, and has generated criticism in the past for requesting a government plane — which costs thousands of taxpayer dollars — for his honeymoon and reportedly using a private plane to fly to Fort Knox to view the solar eclipse in August, according to The Washington Post.

The package was found near Mnuchin's home early Saturday evening after a neighbor tipped off the Los Angeles Police Department about a suspicious Christmas-themed package spotted in the driveway of the Beverly Hills neighborhood. The LAPD bomb squad was even called in to inspect the package, eventually concluding that the package contained a "pretty good quantity" of horse manure.

On Monday, the United States Secret Service announced that it is interviewing a suspect who claimed responsibility for the incident. While the agency declined to provide the name of the suspect to the public, Strong confirmed in his interview with AL.com that he was the person being interviewed by government officials. But he didn't seem concerned about the investigation — in fact, he expressed pride, stating that he now has something in common with many social justice advocates.

"I just got interviewed by the Secret Service and I've now joined some of my heroes like Timothy Leary and Martin Luther King," Strong said.

According to Secret Service spokesman Cody Starken, the Secret Service takes all alleged threats seriously. Starken declined to comment on any possible criminal charges connected to the incident.