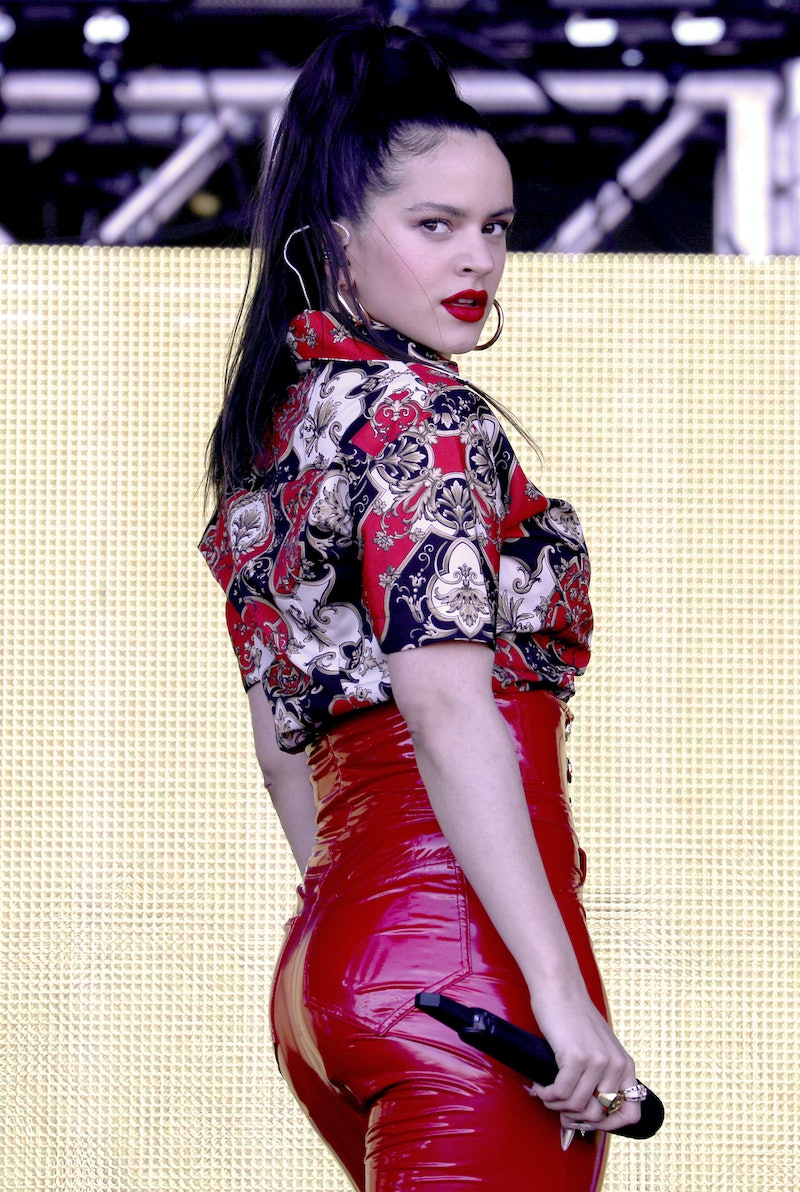 This year's VMAs are full of performers that are making waves on the charts, including Lizzo, Lil Nas X, and the Jonas Brothers. But there's one performer you might not have heard of that needs to be on all your playlists ASAP. That musician is Rosalía, a Spanish singer making modern pop-infused flamenco music and dabbling in reggaeton as well. Before you ask more about who Rosalía is, just know that the Video Music Awards performer is someone you're going to be hearing about for a long time. Need proof? It's her first year at the VMAs and she's already nominated for three awards: Best New Artist, Best Latin Song for "Con Altura," and Best Choreography for "Con Altura."

For those who haven't had the pleasure of becoming a Rosalía fan yet, the 25-year-old has been studying music since she was 13, according to ara.cat. She got her first taste of fame at 15 when she auditioned for a Spanish singing competition called Tú sí que vales, according to Marie Claire, and is known for her use of flamenco, as heard on her two albums, Los ángeles (2017) and El mal querer (2018). But it wasn't until her second album that she started making waves in the States, with her breakout single "Malamente," which seemed to be everywhere in 2018. Not only did it appear on an episode of Netflix's hit Spanish original show Elite, its video went viral on YouTube soon after being released, and it currently has over 99 million views.

And while El mal querer charted well in Spain and on US's Latin charts, it wasn't until her massive single, "Con Altura," with J Balvin, was released in March of 2019, that she made it into US' pop charts. According to Billboard, it was at number 18 on Billboard's Bubbling Under Hot 100 Singles chart. The song marked Rosalía's move into a new genre of music, straying from her flamenco style native to Spain, and moving into reggaeton territory thanks to J Balvin, who's Colombian and a resident reggaeton artist.

The nominated video for "Con Altura" is nothing short of iconic, of course, with killer choreography and a perfect wardrobe. In her "Diary of a Song" New York Times video, Rosalía explained how they used classic reggaeton beats perfected by Daddy Yankee to set the scene, if you will, for the song. Throwing J Balvin on it with his verse just solidified its status as a banger. It's so good that even President Barack Obama included it on his 2019 Summer Playlist.

All of Rosalía's songs are obviously in Spanish, but non-Spanish spears should not let that make you miss out on her music. Even if you don't speak the language, just one listen to her music will have you getting up off your seat to dance the night away. It's music that makes you feel something, no matter the language. And with her performance at the 2019 VMAs, she's going to make sure everyone knows her name.