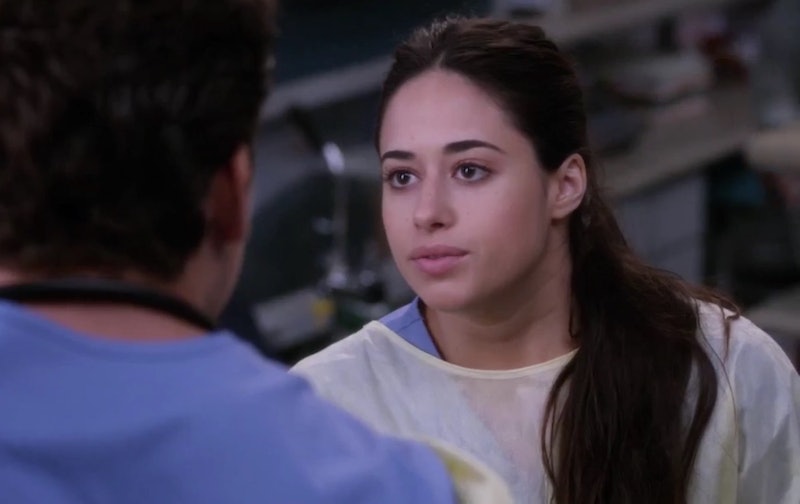 When Jeanine Mason first stepped onto Grey's Anatomy's set as Sam, one of the new interns, she was no stranger to the show. In fact, she was entering a world she had witnessed at its very inception. "In its first five years, [the show] coincided with my last years at home throughout high school before I moved out to Los Angeles," the actor says in a phone interview with Bustle. "It was the priority of my sister and I to watch it every week."

As Andrew DeLuca's new Grey's Anatomy love interest, Sam, Mason was entering a world that was as familiar to her as it is to all fans. The classic characters of Meredith and Alex, as well as the dearly departed Derek, Cristina, George and Izzie, were deeply rooted in her memories, making it an even more intense experience when she then shared scenes with the longtime stars.

Mason says that every once in a while, she'll have a moment of clarity that breaks through her focus on a scene, and she becomes excited about her situation all over again. "It's so crazy. Sometimes you get into the rhythm of work, which is familiar to me ... and then you sort of look up at a scene partner and you realize it's Justin Chambers [who plays Dr. Alex Karev]," she says. "And he's so lovely and right there in the flesh working off of you, and your mind is a little blown."

Mason says she sees a lot of the new cast members' own experiences in the struggles of their characters — they're entering a daunting television set as their counterparts are entering a nerve-wracking, world-renowned hospital. "It's one of the most important, groundbreaking shows for this glorious TV era that we're in right now, and it has such staying power, and such iconic characters," she says. "So although it's really lovely, it's definitely intimidating coming in. It's been just the best set up, coming in with the six of us [new interns] ... We like to joke around and call ourselves the six-pack."

That's right — the new Grey's interns have a nickname for themselves. It seems to hearken back to the camaraderie viewers saw among the original cast, and that fans' always hope lingers behind the scenes among co-stars. Mason definitely feels that love, and even says that the group didn't all enter production as strangers.

"The best part about it has honestly been working with each other and helping each other, but also working with friends. Jake Borelli, who plays 'Glasses' [fellow intern Levi Schmitt] on the show, has been a friend of mine for years," she gushes. "We've known each other since I moved out here and we went to acting school together, so it's just a coincidence that we both ended up on the show together. It's been really lovely to have a friend with me through this epic shared experience in both our careers."

Mason's situation in the role of Sam is also one that hits particularly close to home — and not just because she was an early fan of the show. Her boyfriend just finished medical school himself and is starting his own path as a real-life medical intern, she tells Bustle. "It's sort of been a running gag that any time I have a question I will send him a voicemail," she says with a chuckle. "The other day I had a ridiculous line about a hematoma or something, and [asked], 'Can you send me a text and tell me what this is? I need to memorize this line!'" She continues, "I didn't really have a frame of reference for medicine [before that]; there are no doctors in my family. This year has been such a crash course between the show and my boyfriend finishing med school. It's so funny how that happened."

Mason says that her time as a fictional doctor has also allowed her to understand her boyfriend's all-hours-of-the-day schedule. "I also am kind of able to empathize with him more, with his insane hours. I had a scene one day … when Sam had spent three days awake dealing with the cyberhacking that had happened at Grey Sloan, and she was sleep deprived and sort of losing her mind," Mason says, "and as I was walking into work to shoot that day, he had just come off a three-day shift and he was hallucinating. He was delusional. So it was perfect," she says with a laugh.

It's almost like the stars aligned for Mason as she took the role on the legendary medical drama, and she seems more than ready to continue on this journey as Sam when Grey's Anatomy pushes forward through the rest of its dramatic, exciting season. And, while she may have traded watching on the couch for acting in the show — in her heart, she's always going to be a fan just like us.