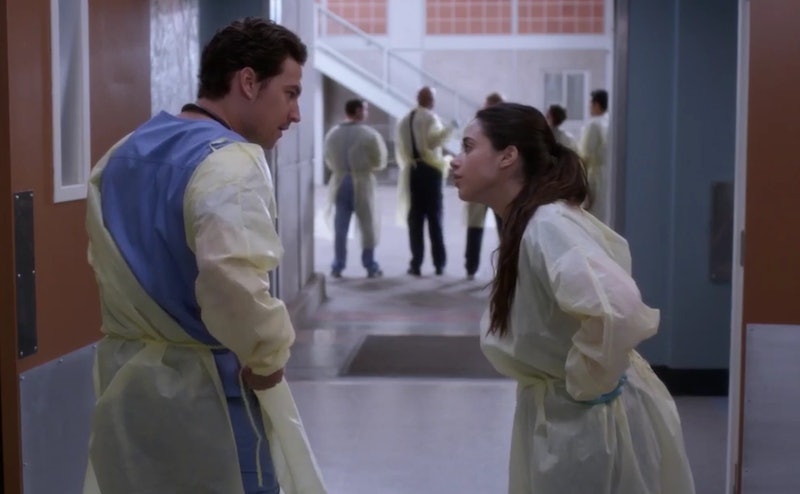 While most of Grey's Anatomy's iconic romances have invited audiences to take part from the very beginning, one new relationship on the medical drama remains mostly a mystery to viewers. We're still not sure how new intern Sam knows DeLuca on Grey's Anatomy, but it's clear that the two have a tumultuous past. Still, it might make you feel better to know that Jeanine Mason, who plays Sam on the show, was kept in the dark right alongside viewers, especially in the very beginning.

"It's super challenging [to have that mystery]," she says in a phone interview with Bustle about her character's past. "But [the secrecy] is part of what you sign up for when you're working in TV, because you have to honor that these writers like to keep the twists and turns under wraps for the good of the fans. And so I completely understand that."

Though the showrunners aren't always able to reveal too much to her ahead of time, she tries to get as much to work with as she can. "You go into it with optimism, but you ask as many questions as you possibly can. [The writers have] been lovely in that they’ll feed us little nuggets of gold every now and then, but a lot of it is still a mystery to me," she says. "I mean, I know more now because we’re shooting right now well into the season, but, off the top, it was so many questions off my first episode. I knew Sam was going to see [DeLuca] and have this shocked moment, but I had no idea what any of the secrets and revelations were."

It's been apparent from the very moment Sam and DeLuca laid eyes on each other that they had a history of some sort, and more fuel was only added to that mysterious fire as they began hooking up. Earlier this season, Sam made it clear that she didn't arrive at Grey Sloan in an attempt to chase DeLuca — she's got her own life to live, even if he proves to be a common thread throughout it. Mason says that this attitude is something that continues through the season, and it's what she wants audiences to pay attention to as they get to know Sam.

"Sam is brilliant. She’s top of her class. And [she's] coming into this environment where it’s hard for her to deliver 100 percent, because she’s so very distracted by Andrew DeLuca," Mason says. "What’s exciting is that when January comes and we’re back into the second half of the season, she’s going to really be striving to be her best self in the hospital and to actively resist her addiction, which is him."

While Mason obviously isn't at liberty to discuss many details or divulge any spoilers of what is to come, she did share one bit of interesting information — Sam will choose to specialize in neuroscience as she furthers her time at Grey Sloan, working closely with Dr. Amelia Shepherd.

Sam's medical intelligence isn't the only aspect of her character that Mason is eager to watch unfold alongside viewers — she also had conversations with the writers about Sam's heritage. "One of my big [questions] that I came into this season with was wondering whether Sam is Latina," she says. "I’m Cuban myself, and I was hoping that would be a part of her character."

She was soon assured that, on a show that values telling diverse stories as much as Grey's Anatomy, her character would be no exception. "It wasn’t openly addressed in my first few episodes, so I went up to the writers at a table read and I asked them [if Sam came from a Latina background]. They were like, 'Oh yeah, of course, you just wait. You just wait,'" Mason reveals.

Mason can't wait for Sam's background to be further explored, especially after seeing other Latina characters dominate the show in such major ways in previous seasons. "That was such exciting news for me, because there hasn’t been a Latina on the show for a while," she says. "Sara Ramirez who played Callie on the show was so epic, and so iconic, and huge for me as … a viewer growing up and seeing her be her badass self strolling down the halls of the hospital."

While so much mystery still exists surrounding Sam in general and her history with DeLuca, viewers shouldn't worry. The new intern has a dedicated writing team and an enthusiastic actor guiding her story through what is sure to be an interesting time at Grey Sloan.