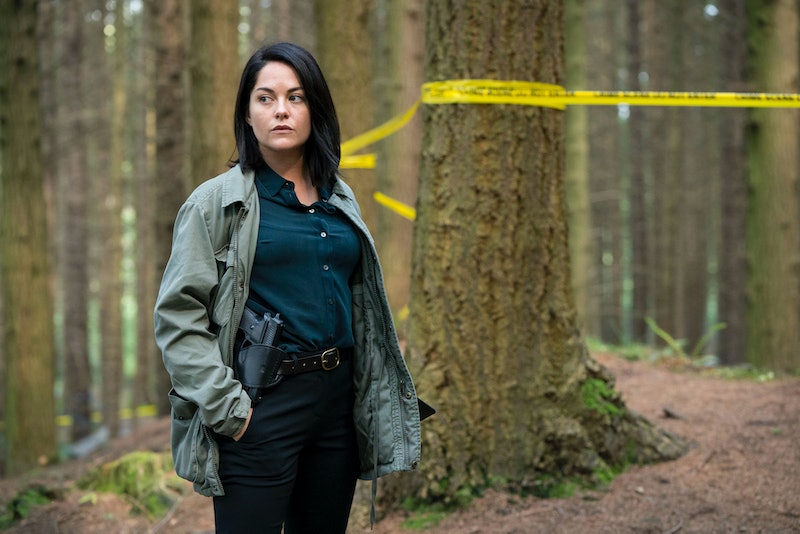 If you're still reeling from the ending of The Capture last week, have no fear because BBC has yet another thrilling drama up their sleeves. Dublin Murders is set to premiere on Monday night (Oct. 14), and will have you equally, if not more so, captivated due to the murder mystery that carries the narrative. As the series is set in Ireland, you'll also be seeing a lot of familiar Irish faces, like Sarah Greene, Killian Scott, Tom Vaughn-Lawlor and Sam Keeley. But who is Sarah Greene, and what other roles as she portrayed?

Originally from Cork, Greene wanted to become an actor at quite an early age. "My parents took myself and my sister to see the Christmas panto Red Riding Hood in Cork Opera House and I was sold," she told the Gaiety School of Acting in 2013. "All I wanted to do was get up on that stage!"

From there, her parents enrolled her at the Irish acting school CADA Performing Arts until she was nineteen-years-old. Greene then received a diploma from the London Academy of Music & Dramatic Art (LAMDA), and continued to study at the Gaiety School of Acting where she graduated in 2006.

According to The Lisa Richards Agency, who represents Greene, the actor's first lead role following her graduation was in Love and Savagery, and also starred opposite Brendan Gleeson in The Guard. Along with numerous roles in theatre, Greene has since gone on to star in Vikings, Penny Dreadful, and Ransom, and has also provided voice work for video games such as Assassin's Creed IV: Black Flag.

Greene has had a lot of experience to prepare for the challenging role of Casie Maddox in Dublin Murders, which is precisely what she advises aspiring actors to do. "If you want to be an actor go to college, I received amazing training in the Gaiety and I highly doubt I would be where I am today if I didn't go," she said. "It can be a very tough job at times as it comes hand in hand with rejection so you have to have a thick skin and get used to the word NO."

"I learnt so much from watching and working with experienced actors so try to go the theatre as much as possible."

This experience seemed to help her immensely for the filming process of Dublin Murders, as both she and her co-star Killian Scott have spoken about how difficult filming could be at the time. "You do get to the stage where you're exhausted," Scott explained to The Herald (via Her). "Although that's not the worst place for an actor to be because they're turning off their critical brain and just doing it."

"I felt completely satisfied by the work," Greene added, "but I was pretty broken by the end of it. I took two months off!" Obviously, she can't reveal much about the series, but as she told The Sunday Times, they were filming in Ireland for seven months and it "was the coldest job she's ever done."

Dublin Murders won't be the last you'll see of Greene for a while thankfully, as she's also set to star in the TV adaptation of Sally Rooney's Normal People next year. "It's an intimate show and there's a lot of sex in it," Greene said. "It's important for you people to see a relationship they can relate to. Maybe they don't have the vocabulary or confidence to speak about what they want or how they want it." She added: