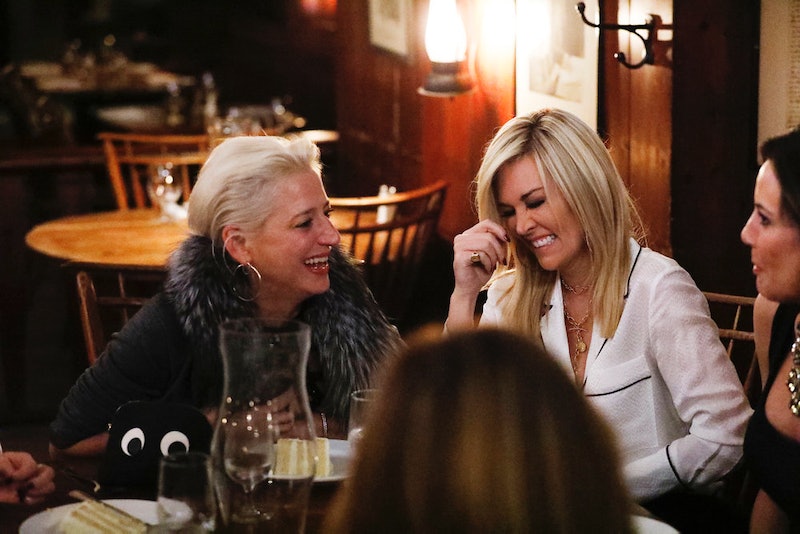 Hold onto your hats, Tinsley Mortimer fans. The second part of the Real Housewives Of New York Season 11 reunion is upon us, and from the previews, it seems like Tinsley is finally going to have to answer all the questions about her relationship (or lack of a relationship) with Scott Kluth, the CouponCabin king. Tinsley insists that she and Scott are really, truly broken up, but the other women aren't biting. Well, if they're really broken up, who is Scott Kluth dating after Real Housewives Of New York?

He's notoriously private, so it might be really, really hard to figure it out.

Back in May 2019, Tinsley explained that a lot of her breakup with Scott was because of distance — he's based in Chicago and she's a New York City gal. "It's difficult to do all the ups and downs [of the show] and have him not be in the same town," she said. "I mean, it takes some time to get to know somebody and certainly we're not living in the same time [zone]. It's difficult." Fair enough.

Scott and Tinsley barely knew each other when they met, and while long distance relationships can work, it is much easier to build a relationship when you're actually in the same time zone.

But if you want to know if Scott has moved on from Tinsley and is currently dating anyone else, well, good luck. Scott doesn't have any public social media that's easily searchable under his name, and it doesn't seem like he's done any interviews or press since 2013. If you want to know what's going on with Scott, you have to ask Scott. And it doesn't seem like he wants to tell you. That makes a lot of sense, considering that Tinsley said on Real Housewives Of New York that Scott didn't want to be in the limelight.

Yes, these two met on television, because Scott was Carole Radziwill's friend, but perhaps Scott didn't want to stay on television. Tinsley's job requires a lot of public posturing, and it's fair to say Scott wasn't into it.

As far as Tinsley's dating life is concerned, Radar Online, Lisa Vanderpump's favorite gossip site, reports that Tinsley may be rebounding with Access Hollywood-Trump-tape co-star Billy Bush. They were allegedly seen together with a group of friends at Brooklyn Bowl, a bowling alley and music venue in New York City, which is hard to believe — do we really think Tinsley would wear rented shoes?

In any case, Tinsley told People that she was definitely on the market. “I am fully dating again,” she said. “I’m dating a lot of different people. I’m having fun doing it. I feel free and like myself again.”

Tinsley may be single now, but the RHONY women seem to think that Tinsley and Scott were still together while they were filming the season because Tinsley was still buying expensive things without Scott. Um, Tinsley has family money? She also was married to Topper Mortimer, a man from another wealthy family, and Tinsley could be receiving alimony post-divorce. Also, Tinsley is an author and media personality in her own right, so why do the women find it hard to believe she can afford this lifestyle? They'll hash it out on Real Housewives Of New York and we'll see what's really going on.

More like this
Erika Jayne's Estranged Husband Tom Girardi Has Been Indicted On Fraud Charges
By Jake Viswanath
Everything To Know About A Potential 'RHODubai' Season 2
By Kadin Burnett and Brad Witter
'RHOSLC’s Heather & Whitney Are Still On A “Friendship Break” After Season 3 Reunion
By Jake Viswanath
RHOP’s Robyn Dixon Explained Why Juan Paid For Another Woman's Hotel Room
By Brad Witter
Get Even More From Bustle — Sign Up For The Newsletter
From hair trends to relationship advice, our daily newsletter has everything you need to sound like a person who’s on TikTok, even if you aren’t.