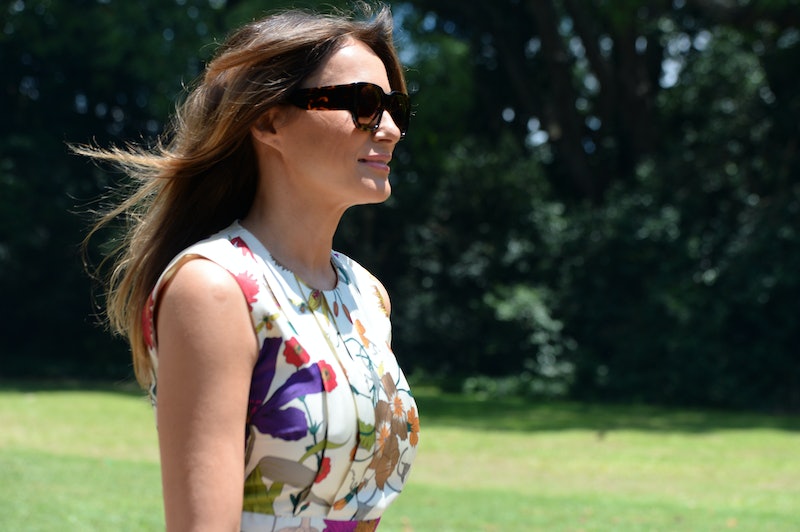 Following weeks of uncertainty during the partial government shutdown, House Speaker Nancy Pelosi formally invited President Donald Trump to deliver his State of the Union address on Tuesday. Like members of Congress, the first lady had the opportunity to also invite a certain number of guests to join her at the SOTU. So, who is sitting with Melania Trump at the SOTU this year? The White House released a list on Monday indicating that the first lady has been joined by 13 guests, including a Holocaust survivor, a sixth grader who shares the first family's last name, and a woman who was granted clemency by the president last year.

As The New York Times reported in both 2017 and 2018, the first lady's guests at the SOTU are often a reflection of the president's priorities, and may relate to the subjects he intends to highlight during his address. Last year, for example, CNN noted that Melania's guests included people who had benefited from the president's tax cuts, and others whose loved ones had been killed by MS-13 members.

This year, Donald and Melania's joint guest list highlights issues on which the president has focused throughout his term, ranging from immigration to prison reform. Their guests include a police officer, lumber facility plant manager, and a brain cancer survivor, as well as several others.

Among the first lady's handpicked guests is Joshua Trump, a sixth grader who has reportedly been bullied for sharing the president's name. One of Melania's primary focuses as first lady has been bullying prevention, and this particular choice on her guest list is meant to reflect that, according to TIME.

Two other notable guests are Alice Marie Johnson and Matthew Charles. Johnson is a 63-year-old woman who was sentenced to life in prison on nonviolent drug charges. After being incarcerated for nearly 22 years, she was released from prison last year after Kim Kardashian intervened and the president granted Johnson clemency. Charles, meanwhile, was one of the first people released from prison as part of the First Step Act, a piece of legislation facilitating criminal justice reform that the president signed back in December.

Melania also included Debra Bissell, Heather Armstrong, and Madison Armstrong on her guest list. According to the White House, these women are the daughter, granddaughter, and great-granddaughter respectively of a couple that was killed in Reno, Nevada last month, allegedly by an undocumented immigrant. Throughout his presidency, the president has claimed that undocumented immigrants have killed thousands of American citizens, though PolitiFact has found that claim to be false.

The president and first lady's guest list also appears to address last year's shooting at the Tree of Life Synagogue in Pittsburgh. One of their guests is a Holocaust survivor named Judah Samet, a member of the Tree of Life Synagogue who survived the shooting — potentially because he was a few minutes late to that day's service, according to The Washington Post. Another one of their guests is Timothy Matson, a Pittsburgh police officer and SWAT team member who responded to the October 2018 shooting and was shot multiple times in the process.

In addition to highlighting immigration, bullying prevention, and criminal justice reform, Donald and Melania are also using their guest list to bring attention to everything from the opioid epidemic and childhood brain cancer to human trafficking and tax reform. According to The Washington Post, the president aims to present his policies pertaining to the opioid epidemic and criminal justice reform as legislative victories.

In order to reflect this, Melania's other guests include Ashley Evans, a woman who is recovering from opioid and substance abuse; Grace Eline, a nine-year old brain cancer survivor; Elvin Hernandez, a special agent in the Department of Homeland Security's Trafficking in Persons Unit; Tom Wibberley, the father of Navy seaman Craig Wibberley, who was killed when the USS Cole was bombed in Yemen nearly two decades ago; and Roy James, the plant manager of a lumber facility that — according to the White House — would have permanently closed down had it not been for the Trump administration's tax cut legislation.