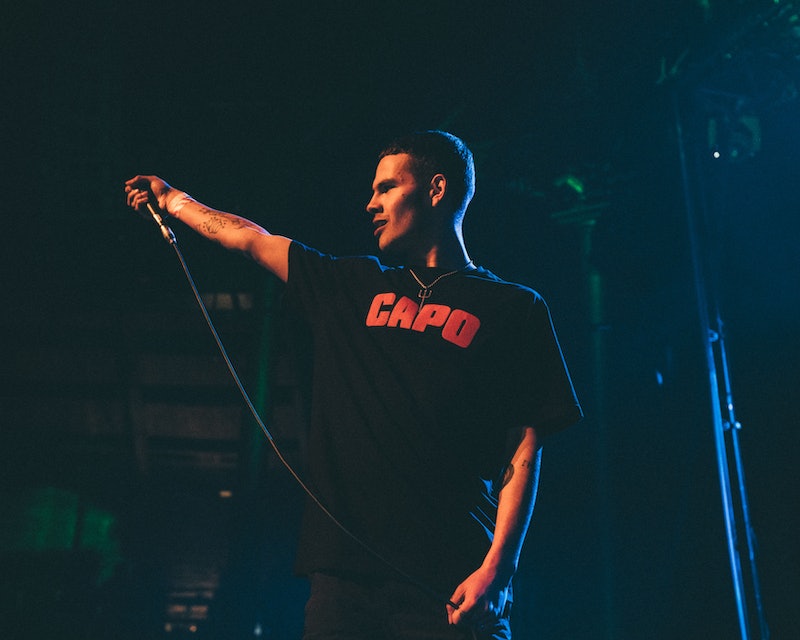 Each year, ticket-selling app DICE announce their pick for the best emerging live act from the UK and Ireland. And I'd respect their opinion if I were you. These guys must go to a lot of shows. In previous years, they've crowned the likes of Wolf Alice and rapper Dave, but their latest crownee is a act unlike any other. Enter Slowthai, the MC who's mixing rap with punk, and making music feel vital again. He's bound to make some huge waves in 2019, but who is Slowthai, the self-styled "Brexit Bandit"?

Tyron Frampton, now better known as Slowthai, "is a great example of how live music can be so powerful," DICE's head of music Jason Edwards told NME following the MC's win on Friday, Jan. 1. "I saw him play The Underworld last year and was blown away, can’t wait to see more in 2019," he added.

Slowthai's live shows have become notorious for their nudity. They're "spectacles of sweat and skin," Pitchfork wrote on June 25, 2018. Like a rap show and a Chippendale performance combined, Slowthai "strips to his boxers and tosses himself to the front rows of his audience." But why all the nakedness?

"It’s when I’m at my most vulnerable," Slowthai told Pitchfork, adding:

"[I]t shows the weakness of masculinity. It’s me being my realest. I can’t hide behind clothes, I can’t hide behind anyone. If I can do this and get up in front of all of you in my boxers, or even if I was to go naked and not feel any shame, why can’t you go out and just be proud of yourself and know you’re the best person."

You can't clothe Slowthai and you can't box him in either. This artist resists being tied down — sonically or otherwise — and, as a result, moves freely between high-octane musical genres such as "hard-hitting grime and wonky rap," as the Guardian describes it, all while maintaining an infectious energy.

But all this furore comes from a righteous place. Slowthai is politically amped — and he's definitely not a fan of Theresa May or Brexit. “She’s the wrong person,” he told NME, “She isn’t right. There’s nothing she’s said or done that gives me confidence in her speaking for us as people.”

Slowthai added in his interview with NME: "They’re all aristocrat people who end up being politicians and speaking for the lower-class and middle-class and people that they can’t actually understand, because they haven’t gone and worked in Poundland or applied to McDonalds."

Now he's about to bring all that frenzy to the locations all around the UK as he prepares to embark on his biggest tour yet. He'll be playing everywhere from Glasgow to Brighton, and you can see him in the sweaty flesh by buying tickets via DICE. Prices currently start at £13.20, which I reckon is well worth it to see Britain's best emerging live act.

Speaking about the upcoming shows to DICE, Slowthai said: