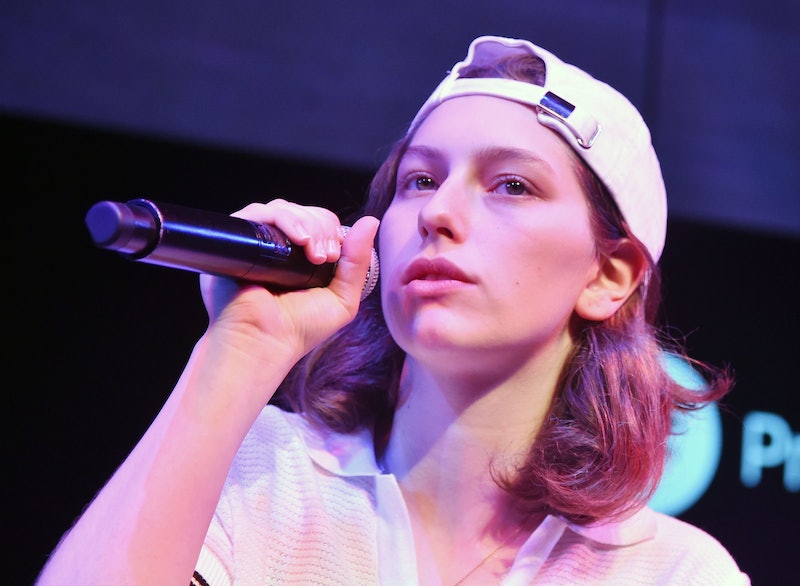 I don't know how it's taken so long for the world to be gifted a pop star it truly deserves, but now the moment's finally here I'm not going to stay too mad about it. Right now, some of the most talented people in the world are girls recording songs in their bedrooms and they're finally coming to the fore. The artist this article is dedicated to was one of them. Any music publication worth their salt has put her on their "ones to watch" list, but who is King Princess, the musician who's going to take over your playlists in 2019?

Last year, thanks to Mark Ronson's championing, King Princess (real name Mikaela Straus) became the first signée to Columbia's Zelig Records. Ronson posted her debut to his Twitter — the Patricia Highsmith-inspired queer bop "1950" — and called her a "prodigy in the making." Not bad coming from such a successful artist. There are definitely worse people to have fighting your corner.

As Ronson also pointed out in his tweet, Straus plays all of the instruments, and wrote the record entirely by herself. Pretty amazing for someone who's only just turned 20. It's taken from her EP Make My Bed, and as Ronson attested, it's "only a hint of what's 2 come."

King Princess definitely hasn't been ambiguous when it comes to the subjects of her songs, the ones who've been memorialised in her love-soaked, synth-drenched bangers. “I reached a point in my life where I was like, well, am I gonna gender my songs?” she told i-D.

“And I decided, yeah, I’m gonna put f*cking female pronouns in my songs. It doesn’t make any sense for me to hide that part of myself. I needed to do it to help love myself and get through shit. I needed to be true to it and be like, yeah, this song’s about a lady,” she says of "1950."

In an interview with Billboard, she explained she learned the ropes of recording while growing up in Williamsburg, Brooklyn with her studio engineer granddad, Oliver Straus. While he helped record music with the likes of Missy Elliott and Sia, KP was writing some of her first songs. “I wrote about ladies who had come through the studio,” she told the publication.

She's previously been linked to the Hunger Games actress Amandla Stenberg, since they made an appearance together at 2018's MTV Music Video Awards. It's not quite Ariana and Pete level, but I'm that sure KP's going to get pestered about her love life quite a lot as her star rises. That might be one downside to the level of fame that KP can expect, but she's finding plenty of positives about her success, too.

"It’s really moving how many people have reached out, especially when you get messages from queer kids saying thank you," she told i-D. I'll add myself to the pile: thank you, King Princess for bringing the bops. 2019 is going to be your year.