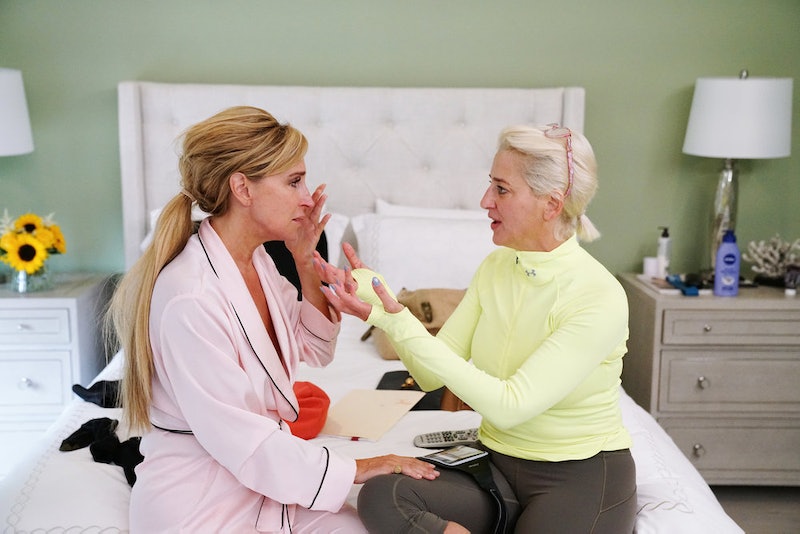 The great irony of Real Housewives Of New York is that exactly zero of the women are actually housewives — they're divorced or widowed or single or playing the field, but none of them have a ring on their finger that wasn't bought for themselves, by themselves. And that's fine — they're all at a different stage of their lives. But despite being at a different stage in her life, Sonja Morgan loves to talk about her ex-husband and the relationship they once had. Who is Sonja's ex-husband on RHONY? John Adams Morgan comes from a very, very prominent New York family.

According to Page Six, Morgan is the great-grandson of John Pierpont Morgan, who is the man who founded J.P. Morgan & Co. — you know, one of the biggest banks in the world. Henry Sturgis Morgan is John Adams' father, and he was the man who founded brokerage Morgan Stanley. So, yeah — there are some big banking brains in the Morgan fam. John Adams himself, according to Bloomberg, went to Yale University, and he's currently the Founding Chairman of Morgan Joseph TriArtisan, LLC.

A lot of banking in this family. A lot of money moving.

The 88-year-old John Adams had a few wives before he met Sonja, but after they met (she was a restaurant consultant, as she's said on the show), they married quickly, wed from 1998 to 2006. According to an interview with the New York Post, Sonja said their courtship was sweet, even though he was more than three decades older than she. "I knew him for seven years. We married in ’98, and I was dating younger, wealthier guys that probably you would think, like, why didn’t you go for them?" she said. "But he was relentless . . . and when he asked me out on a dinner date, finally, after he sent me a letter and flowers and chocolates, I said, “OK, let’s go to dinner.” After the dinner, he proposed. He really loved me. He was perfect." The two had a daughter, Quincy, in 2002.

Sonja went on to say their relationship was good until it wasn't, and that her divorce came as a surprise. "There were some people I shouldn’t have trusted. And now I’m fending for myself — that’s the hard thing. It’s been a learning curve for me," she said. "I’m a care-giver. I’m a hostess. I like to take care of people. I need a rock. And don’t get me wrong, the rock needs me."

Sonja recently told The Daily Dish that her breakup was painful for all parties, but Sonja is seemingly the only one talking about her divorce some ten years later. Divorce is a terrible, awful thing, but shouldn't she have moved on by now? Many of her fellow Real Housewives Of New York cast members have accused her of being stuck in the past, and in clips for upcoming episodes, Sonja is going off again about no longer being an official Morgan. She talks about it constantly. She compared her divorce to Dorinda's husband, Richard, dying of cancer. It's a lot!

It's hard to let go, but if she's ever going to truly get over her divorce, Sonja needs to move on and drop the Morgan. It's wonderful that she and her ex have an amicable relationship for the sake of their daughter, but now, it's time to push forward.