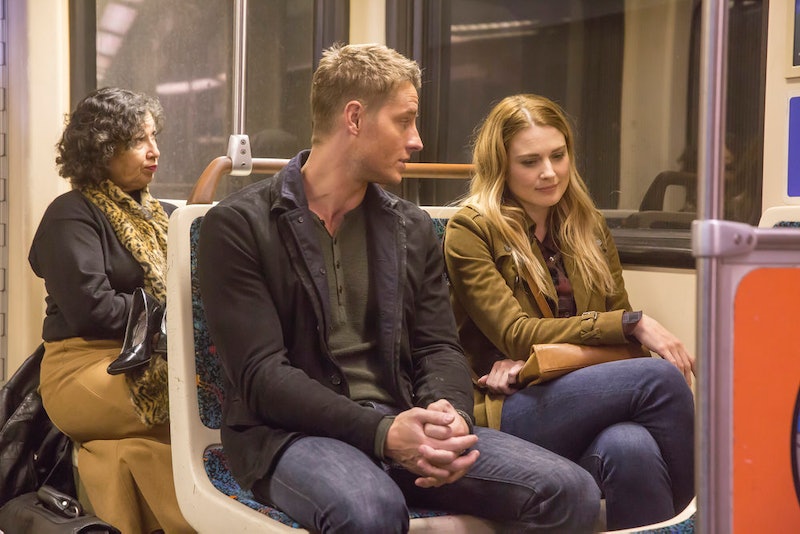 This Is Us is a story about love and family and friendship, but let's face it: love hasn't been too kind to Kevin so far. He crashed and burned with his play's co-star Olivia (Janet Montgomery) after a failed attempted to connect with her emotionally. To add insult to injury, his potential rebound — the play's writer, Sloane (Milana Vayntrub) — wasn't exactly a romantic fairytale relationship, either. Following a fight with Sloane and feeling lost, Kevin had a heart-to-heart with Toby and decided to go back to where it all started. Though many viewers expected him to run to Olivia or Sloane, instead, Kevin went to Sophie on This Is Us, his childhood sweetheart and — wait for it — ex-wife.

First of all, if the character of Sophie looks familiar, it's because she's played by actress Alexandra Breckenridge, lately of Walking Dead fame. You also might know her from the cult series Freaks and Geeks, where she guest starred as Shelly Weaver. As we learned in last week's episode, Sophie has known Kevin since they were kids. She was originally Kate's best friend, but Kevin fell in love with her (as young kids do) and he staged his whole 10th birthday party around trying to impress her. It seemed to have worked, as Sophie totally was into Kevin, and even gave him an adorable card that signified her affection. Awww!

But This Is Us likes to throw us tantalizing moments like this and then leave us hanging. We have no idea what happened between Kevin and Sophie after they were 10 years old. All we know, based on Kevin's admission, is that they did get married — at least 12 years ago, when he would've been 24 — and they haven't seen each other in years.

We know that Kevin is a romantic, and that he takes his romantic gestures pretty far. And because he's been in love with Sophie forever, I'm pretty sure that we're going to see some really big shows of affection from him as he tries to re-connect with her in a way that doesn't involve her slamming a door in his face.

But there's definitely hope, as in an interview with Entertainment Tonight, actor Justin Hartley explained what makes their relationship special. "They grew up together so they have this familiarity that a lot of couples don’t have," he said. "For Sloane and Olivia, they were filling a void in Kevin’s heart that they were never going to be able to fill and in his heart of hearts, he knew that."

Sophie's re-entry into Kevin's life could certainly bring an entirely new level of conflict to the Pearson family. We don't know what's happening between Kate and her former BFF, though they must have had some relationship while Kevin was married, judging by how close the siblings are. And Randall is probably having his own feelings about Kevin going back to a relationship that, for reasons still unknown, didn't work. But Kevin seems genuinely interested in fixing what went wrong between them, so I have hope that they'll find a new chance at love. After all, This Is Us has to have some happy endings for the Big Three.