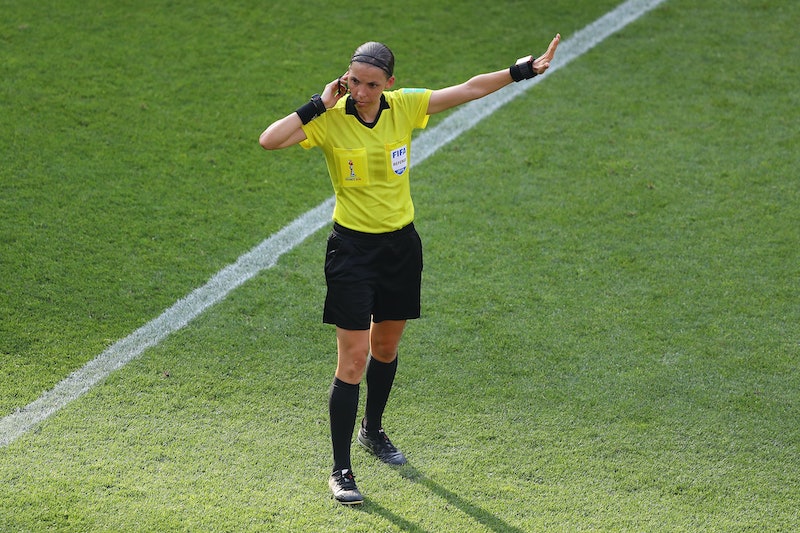 There's no doubt that football is unfortunately still very gendered. But this year, the Women's World Cup proved that the public is finally waking up to the joy of women's football, and rightly so. And, now, ahead of the UEFA Super Cup starting this week, one French referee is about to make history. But who is Stéphanie Frappart, and why is this week monumental for her and other women in football?

The 44th UEFA Super Cup will kick off today (14 Aug. 2019) with Liverpool versus Chelsea in Beşiktaş Park, Istanbul. This game will mark something historic, with Frappart becoming the first woman ever to officiate a men's European match. Frappart will be joined by two more women on the pitch — assistants Manuela Nicolosi of France and Michelle O'Neill of Ireland — as well as Cuneyt Cakir, who will act as the fourth official.

"I hope the skill and devotion that Stephanie has shown throughout her career to reach this level will provide inspiration to millions of girls and women around Europe and show them there should be no barriers in order to reach one's dream."

Frappart found her love of refereeing after playing football as a teen. Speaking to French magazine L’express she said:

"I played football at home in the Val d'Oise, then around 13-14 I became interested in the laws of the game. I turned to my district and I quickly started refereeing matches...around 18-20 years [old] I had to choose between football and refereeing.”

She's already had some world-class experience when it comes to refereeing. Frappart officiated the Women’s World Cup final earlier this year, and she was the first woman in French history to referee a Ligue 1 match this April, for Amiens vs Strasbour.

Speaking to the BBC about her history-making Super Cup appointment Frappart stated: "We train a lot of all the time, so we are not afraid because we are always ready for all the games." And Chelsea's Frank Lampard said: "I'm very pleased to be part of this moment in history, which is very much due."

And he’s right it’s very due. With 4.6 million viewers tuninginto England’s first match in the World Cup against Scotland this summer, it's clear that the public want more women's football, and women in football, on their screens. This year, Soccer Aid, a charity which sees ex-footballers and celebrities join forces for a friendly football game for Unicef, had both men and women playing in the same match, including Katie Chapman and Rachel Yanke.

Alongside Frappart, there are many other referees making history on the pitch right now. Sian Massey-Ellis is an assistant referee in the Premier League; Bibiana Steinhaus referees men’s games in Germany; and Lucy Clark became the first trans woman to referee for England last year.

While it’s wonderful news, it’s shouldn't have taken until 2019 for a woman to referee this match. Visibility is so crucial when it comes to normalising women's involvement in football, and long may it continue.