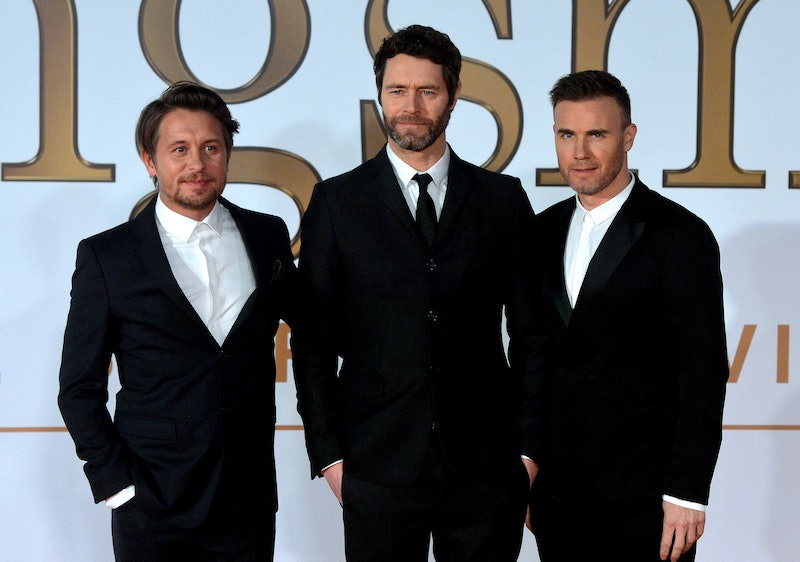 Fans of boyband phenomenon Take That have been seriously excited at the news that the iconic '90s group would be going on tour in 2019. The commemorative tour will be a celebration of the band's greatest hits, and follows the release of the 30th anniversary album, Odyssey. But who is supporting Take That on tour?

Well, according to The Sun, it sounds like fans are in for a treat, because in addition to their favourite boyband, attendees can look forward to '80s icon Rick Astley, who is perhaps best known for his hit "Never Gonna Give You Up." The UK tour will take place between April and June 2019, and will see Gary Barlow, Mark Owen and Howard Donald perform shows in Sheffield, Glasgow, Manchester, Dublin, London, Birmingham, Milton Keynes, Southampton, Bristol, Norwich, Middlesbrough and Huddersfield.

Tickets are currently available to purchase on Ticketmaster, AXS and Seetickets, and although former Take That star Robbie Williams won't be taking part in the tour, according to The Sun, the current X Factor judge is rumoured to be joining his old bandmates on stage this weekend during the live final of the ITV competition show. The current Take That line-up confirmed on Twitter that they would indeed be returning to The X Factor, for what promises to be an amazing performance. The tweet read: "The rumours are true… we will return to the @TheXFactor."

Despite confirming their appearance on the show, the band are yet to reveal whether or not Williams will be joining them. Speaking of the rumours, one source told The Sun "Having Robbie on the panel has been a huge coup, but obviously backstage everyone has been talking about whether or not he’s going to sing at some point," and continued "It seems a shame to have one of the biggest pop stars on the planet sat there and not hear him, so they’ve been plotting a surprise for the end of the series."

As previously mentioned, Take That recently released the greatest hits album Odyssey, which marks 30 years since the iconic group's debut. And it looks like the boys have still got it, because the new album is on course to become their eighth number one album in the UK, reports the Evening Standard. According to the Official Albums Charts, Odyssey is currently outselling the rest of the Top 5 combined, and is already the fastest selling album of 2019, with 89,400 copies sold so far. The album is also on course to outperform Take That's previous release Wonderland, which managed to sell 100,000 units during its first week of release back in 2016. The boyband's latest body of work is also enjoying some glowing reviews from music critics, with one review by Chloe Waterhouse for Clash noting "They have far surpassed their sell-by date of typical manufactured pop groups, and ‘Odyssey’ only only confirms their longevity as a music act."

During a recent appearance on The Graham Norton Show, Barlow put to bed any concerns that the greatest hits tour, and accompanying album, signified the potential retirement of the band, reports the Evening Standard. Speaking on the show, he said "This feels like end of part two to us. Part one was the '90s and part two is three decades of music. Then, after this, we can get excited about what's next."