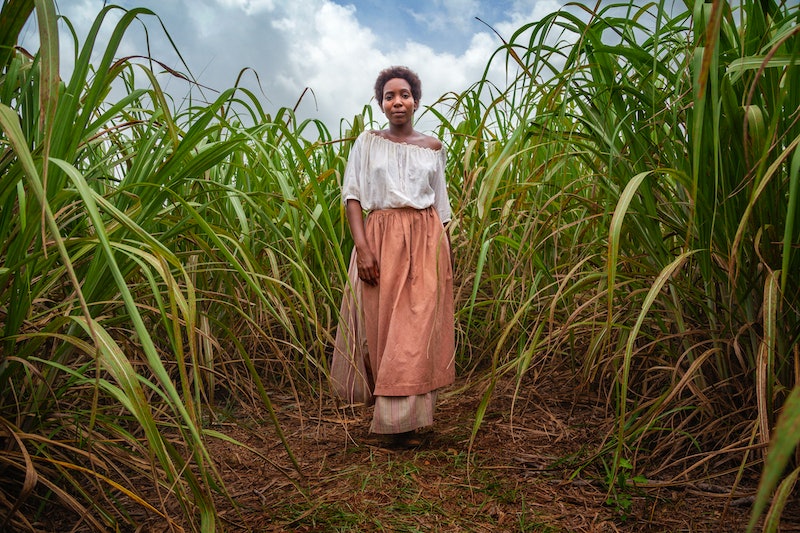 The UK’s colonial past is pretty chequered and has been a cause trauma for people all over the world. The best way to deal with that isn’t to pretend it never happened — I genuinely believe that telling the stories of those who were affected are a starting point for healing. And that’s exactly what BBC’s The Long Song does. It centres on the British occupation of Jamaica and on a slave named Miss July. The cast for the BBC adaptation has just been announced and there’s a seriously talented actor in the lead role. So, who is Tamara Lawrance? She might have only graduated a few years ago, but this isn’t her first rodeo at the BBC.

According to the BBC, Lawrence graduated from RADA in 2015 and made her debut television appearance in the network’s 2016 mini-series Undercover. Back then, she played a 19-year-old woman called Clemency Johnson whose family is wracked by the fallout of her father’s past and mother’s legal case.

Landing that place at drama school was no walk in the park, but nothing was going to keep Lawrance from pursuing her passion. The actor told Screen Daily that she was “encouraged by a teacher at sixth-form college” which led to her joining the Sylvia Young Theatre School before going on to join the Royal Academy of Dramatic Art.

She explained, “I wasn’t aware of how difficult it was to get into drama school until I got in and there were people [there] who had auditioned four times. I’m very single-minded. I understood there was a financial barrier but in terms of things like class, race and gender, I wasn’t really aware of how those things could inhibit me. I just thought, ‘That doesn’t have to apply to me.”

From there, she went on to have a successful career offscreen on the theatre stage as Cordelia in Shakespeare’s King Lear, as well as Dussie Mae in Ma Rainey’s Black Bottom and a role in the Edgar Allen Poe adaptation The Tell-Tale Heart (both performed at the National Theatre).

It also turns out that Lawrance and Meghan Markle have something in common, as they both fell in love with Prince Harry — although for Lawrance it was as his fictional lover Jessica in a 2017 series called King Charles III.

Her Prince Harry was played by Richard Goulding and after the show began airing, some outlets pointed out how eerily similar their relationship was to Prince Harry's IRL romance with Meghan Markle.

But aside from them both being black women, Markle and Jessica couldn’t be more different (the BBC described the character as a "student struggling to make ends meet" who "never had much respect for the monarchy"), however there’s one moment on the series that apparently ended up happening IRL. In the show based on a play, according to Express fictional Prince Harry wound up having a go at the press after “major press intrusion when [his and Jessica's] relationship becomes public knowledge”.

If that sounds familiar, that's because it's not unlike what the real Prince Harry did for Meghan Markle. The actors confirmed to Express that Harry’s statement about Meghan “hit headlines the day before the first read through of the TV version of the play.” Seriously spooky.

While Lawrance has only got one major film credit to her name at the moment, it’s a good ‘un. She was in On Chesil Beach last year, a movie based on Ian McEwan’s novel of the same name, and starred along Saoirse Ronan in the period piece.

With The Long Song on the horizon though, I’m anticipating she’s going to be scooped up for many more projects — especially as it sounds like she’s pouring her heart and soul into the upcoming BBC programme.

She told the BBC, “Every day at work is enlightening. A real blessing to be amongst this cast and crew, playing a character as subversive as July. She relishes mutiny with wit and courage; finding ways to win in spite of her circumstances. She also rings true to Jamaica’s national heroes — Nanny, Paul Bogle and Sam Sharpe — who, by standing up for their own humanity, shifted world history. I believe stories like these illuminate the legacy of slavery in relation to where we are today.”

It sounds like Lawrance has really clicked with her character, but it’s for a pretty disheartening reason. She explained how the racism experienced by her character in the story sadly still occurs today in different forms.

She continued, “One of the tactics of slavery was to separate black families, taking children away, breaking down people’s self-esteem. Of course, we’re not still there, we don’t need to be angry forever, but these things are painful and they come from that time in world history.”

You’ll be able to see Lawrance flex her acting chops in The Long Song when it premieres on Dec. 18 at 9 p.m. on BBC One.