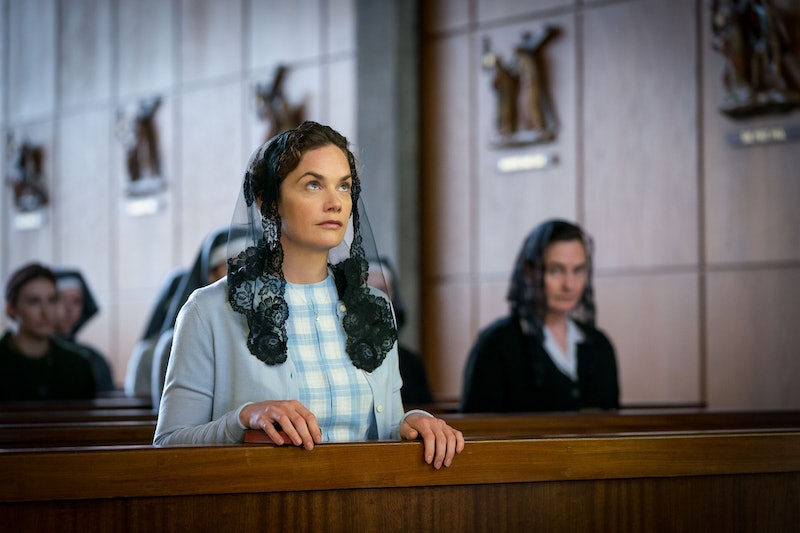 Time flies when you’re being devastated by a TV drama. It’s hard to believe that the final episode of Mrs Wilson is finally upon us, as it’s airing tonight at 9 p.m. on BBC One. I’ve spent the past few weeks devouring every episode of the domestic drama (tinged with espionage intrigue) and given that it’s based on a real story, it’s made the entire world feel way more vivid. The story about Alison Wilson’s journey to uncover just who exactly her late husband, Alexander "Alec" Wilson, is finally drawing to a close tonight which begs the question: will Mrs. Wilson return for season 2?

I was given a screener ahead of tonight’s episode and if you’re not into spoilers, you might want to turn around and click out here. Even before the show started, Ruth Wilson was pretty open about the fact that even now decades into the future, her family still don’t have all the answers to what Alec got up to while he was working with the Secret Service and what led to him becoming a serial bigamist with four wives. (She did admit that she and the rest of the family believed that Dorothy Wick, played by Bodyguard's Keeley Hawes, was “potentially” a “cover wife” and part of his job while he was stationed in India.)

As we talked about what she believed to be true about her grandfather — who died before she was born — she let a potential avenue the show could go down slip.

She told me, “I don’t know. Maybe [Alec] did fall in love with these women and felt that it was his duty to marry them. I mean, that’s a good version of him — he was still having relationships with a lot of people? I don’t know... I’d have to do a drama about him to really sort of analyse what he’s about.”

Since Iain Glen, the actor who plays her grandfather, will perhaps soon be a little freer once Game of Thrones wraps up next year, it would be cool to see him return to Mrs. Wilson. There’s definitely scope for a pretty wild second series if the show decides to flash back through time with Alec as the focus, even if I’m utterly obsessed with Alison and her steely poise at this point.

“I think his life was lived in kind of extremes. He was out in India travelling in the 20s, he was travelling the world and he had such amazing experiences and then to be at the forefront when the war was going on and working the foreign office?” she listed.

That’s not even to mention his four wives, Gladys Wilson, Dorothy Wick, Alison McKelvie, and Elizabeth Hill, with whom he had seven children in total Express reports.

As Mrs Wilson stans will now know, Alec’s life didn’t remain that extreme forever. He was eventually kicked out of the Secret Service in the 40s and Ruth told me that “he was basically a ticket stub collector” at the end of his life, before dying of a heart attack at home. (His heart attack actually serves as the starting point for Mrs. Wilson, as one of his wives Alison unravels his past as it comes to haunt her.)

While at the moment there doesn't seem to be any concrete plans for s a season two, I’ve reached out to BBC One to see if there’s any possibility of a second series for the show, so I’ll let you know if I hear back from them.

As for Alison, her story comes to a quiet yet uplifting end in the final episode of Mrs. Wilson and ends with her eventually devoting herself to the Catholic church. One of the last shots is of her penning a memoir, which actually happened and formed the basis for the show as well as a book by Goldsmiths professor Tim Crook, and Ruth tells me was eventually shared with the family when Alison’s children “were in their 50s and 60s.”

Although Alison finding peace and healing in religion isn’t going to be something that all viewers are going to relate to, Ruth said it was important for her to show Alison “finding this place of peace and forgiveness” as it was crucial for her to “serve that part of her journey.”

She said, “I think probably people won’t get in this day and age, and even back then. And some people might interpret it as a breakdown. It was in a way, but it was her form of salvation or whatever happened. She found survival, but it was quite an extraordinary experience.”

The show wraps up its final episode with a moment that had me ugly sobbing on my couch, where it flashes forwards to the present day and shows you what the characters in the show look like in reality — along with what the entire Wilson clan looks like now. In spite of Alec’s indiscretions and secrets, the different strands of the family came together thanks to Alison’s choice to share the story.

Ruth said, “It’s not the ending that people might expect, but it’s what did happen. And through her finding that peace and forgiveness, she could write her life down and she could pass that story on. And through that, all my family have met each other and been able to kind of unite in their experience over what they all shared — even if they were disparate and separate all over the country.”

Even if Mrs Wilson never ends up having a second series, I’d honestly be happy with where the BBC One programme is left at. I do however hope that one day the Secret Service winds up releasing all their information on Alec Wilson so at least the family gets closure, as documents pertaining to him are still apparently marked “case sensitive,” according to Ruth.

Mrs Wilson’s final episode will air tonight on BBC One at 9 p.m. and previous episodes can be watched on BBC iPlayer if you need to catch up.