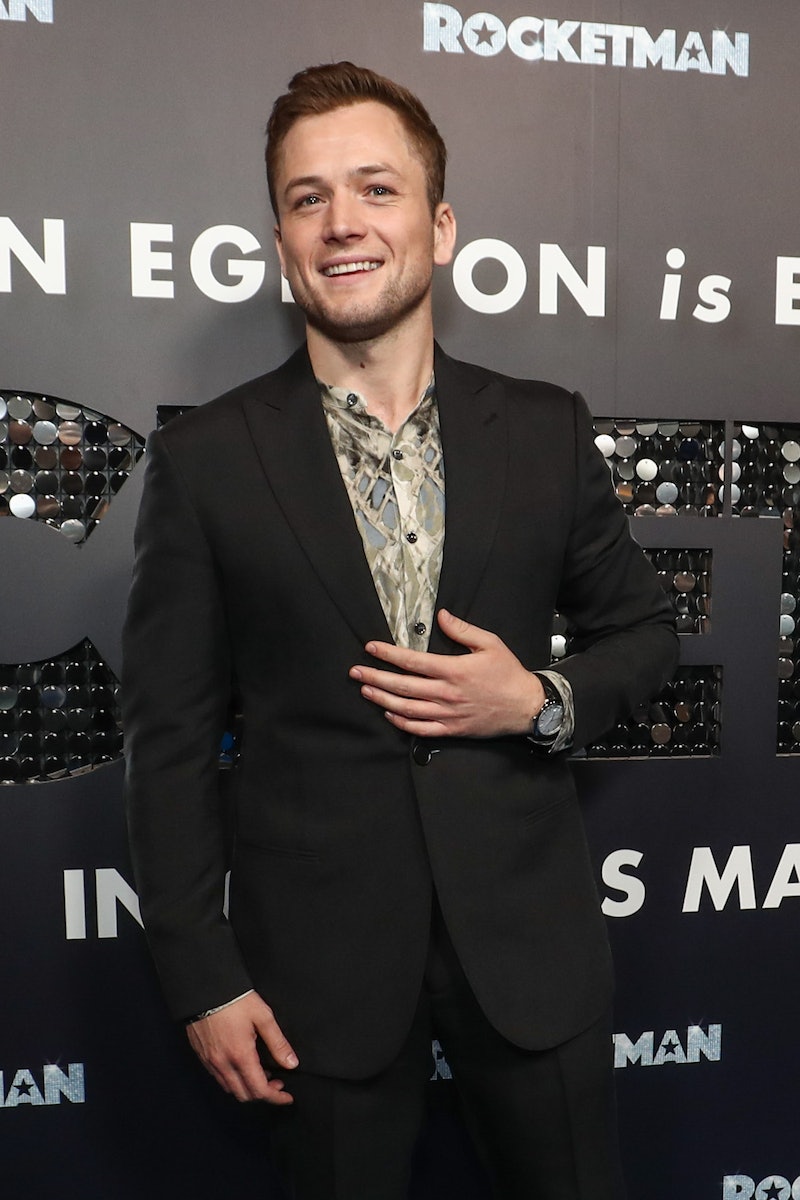 When Taron Egerton arrived on the blue carpet for London's Rocketman premiere on May 20, he had two important women on his arms: One beauty was his mother, Christine Egerton, and the other was Egerton's girlfriend Emily Thomas. For anyone wondering if Egerton is single, the actor who portrays Elton John in the biopic (hitting theaters on May 31), certainly answered that question when he posed for photos — playfully kissing Thomas — outside of the event.

Their relationship is not a new one — though the pair did recently rekindle their romance following a brief split. In an interview for Vogue's April 2019 issue, Egerton admitted that he and his assistant director girlfriend broke up in 2018 but had recently gotten back together — something he said made him feel "really proud."

In the profile, the Welsh actor noted that both he and Thomas are deeply committed to their careers in the entertainment industry — sometimes leading them to spend extended periods of time apart while working. “Unless you’re really vigilant, you can start to occupy separate worlds,” he told Vogue, also sharing a story about finding an old card from Thomas in his bedside table during their separation that was "so poignant it made him cry."

Extra reported on Egerton and Thomas' breakup in November 2018, noting that, at the time, the pair had been dating for two years. According to the news outlet, the actor confirmed the split to the Press Association while discussing a new hairdo, following his transformation to play John in Rocketman.

“I found it quite liberating because I just finished the Elton John thing and had this awful hair," Egerton, who has his breakout role in the 2015 action movie Kings­man: The Secret Service, said, per Extra. "So, I shaved my hair 'cause they had thinned it right out and given me this bald patch. It was very cathartic and also, not to put a downer on things, I split up with my girlfriend not long ago and it weirdly felt a bit like reinvention… to sort of change the way I look.”

By February, Egerton and Thomas were back together, appearing publicly at a pre-BAFTA Filmmakers Dinner in London. Later the same month, they stepped out again for the Elton John AIDS Foundation Academy Awards Viewing Party.

For her part, Thomas had previously been in the spotlight when rumors surfaced that she was dating Tom Cruise in 2015. At the time, she was working as Cruise's on-set assistant for both Mission: Impossible – Rogue Nation and Mena (which later changed its title to American Made). Several outlets also reported that Thomas and Cruise weren't just dating, but they were actually planning to marry as well.

An unnamed American Made production source told People, however, that the rumors were "utterly made up and ridiculous." Added the anonymous insider, "They’re not getting married, They’re not even dating. Nothing is going on. It’s completely professional.”

What is very real, however, is her and Egerton's relationship. And moviegoers will likely be equally as enamored with Egerton and his spot-on portrayal of John when Rocketman debuts on May 31.