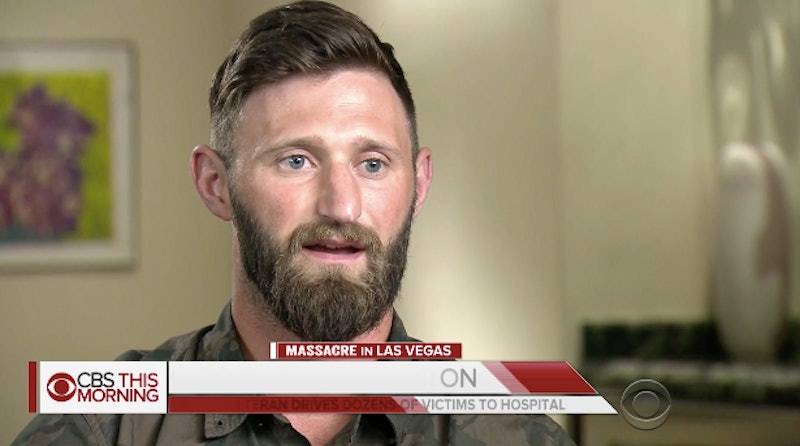 Late Sunday night, the city of Las Vegas was host to the worst mass shooting in modern American history, a massacre by a heavily armed gunman that left a reported 59 people dead and more than 500 more injured. Based on reports, it was a horrifying and chaotic scene, one that demanded the quick action from countless first responders and law enforcement officers. It also, however, drove a former U.S. Marine to get involved in saving lives, and he sprung into action in a big way ― 29-year-old veteran Taylor Winston stole a truck and saved the lives of dozens of people, according to CBS News.

Winston was at the Jason Aldean concert at the Route 91 Harvest festival when the shooting began, a rapid-fire burst of bullets that ultimately chased the country-western singer from the stage, and alerted concertgoers to the fact that something awful was taking place. He'd been dancing with his girlfriend when the attack began.

Instead of simply fleeing and saving himself, however, he reportedly helped a number of people climb over the top of a nearby fence that was trapping them, then stole a white pickup from a truck yard. According to Winston, he got lucky in finding one with the keys inside, and quickly loaded dozens of injured victims inside, taking off to a nearby medical center before ambulances had even arrived on the scene:

I saw a field with a bunch of white trucks. I tested my luck to see if any of them had keys in it, first one we tried opening had keys sitting right there. I started looking for people to take to the hospital. There was just too many and it was overwhelming how much blood was everywhere.

Winston reportedly drove the dozens of victims ― huddled into the truck bed and crammed into the backseat ― to the Desert Springs Hospital Medical Center, roughly four and a half miles from the scene of the shooting.

According to CBS News, Winston returned the vehicle to its owner on Monday night, and although he doesn't know the identities of the victims he transported, and thus who survived and who didn't make it, he felt buoyed by the courage that emerged in the face of the shooting.

There was a lot of bravery and courageous people out there. I'm glad that I could call them my country folk.

In all, the impact of the massively deadly shooting has placed an incredible burden on Las Vegas' hospitals, with hundreds of people still requiring medical care, and some of them still in critical condition.

The heavy death toll and sky-high number of victims was, in part, a result of the considerable armaments the gunman was in possession of, including two "bump-stock" devices capable of effectively giving a semi-automatic weapon a nearly fully automatic rate of fire. Indeed, in the moment, some police officers on the scene believed the gunman to be in possession of fully automatic weapon, as demonstrated by recordings of conversations with emergency dispatchers.

Fully automatic machines guns ― rifles that fire more than one bullet per trigger pull, in other words ― were regulated by the passage of the National Firearms Act back in 1934, and banned from public possession or transfer by a 1986 amendment.

Such "bump-stock" devices have reportedly been scrutinized in recent years, and would've been outlawed by a post-Sandy Hook bill authored by California senator Dianne Feinstein. Owing to the immense power of the gun lobby in America, however, as well as the intractable state of the U.S. Congress on the issue, the bill was not passed, and no action on the devices has been taken since.