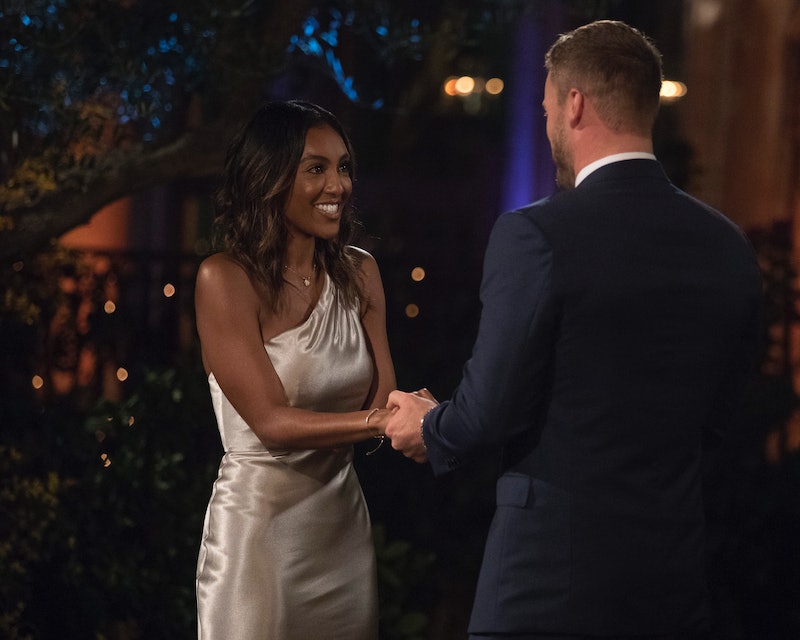 The Bachelor returns Jan. 7 with a new roster of ladies hoping to be chosen by a very eligible bachelor. This season's leading man is former professional football player Colton Underwood, and there are a ton of new faces for him (and us) to get to know in the upcoming weeks. First up? Bachelor contestant Tayshia, who, according to host Chris Harrison’s Facebook comments, will likely be a formidable opponent for the other women because of her undeniable chemistry with Colton.

Tayshia's Bachelor bio reveals that she is a phlebotomist based in Corona Del Mar, California, which isn't too far from where Underwood played football with the San Diego Chargers. The 28-year-old spends time volunteering at her church and recently completed a mission trip in Africa — a quality that may appeal to Colton because he is a devout Christian. She also loves to sample wines in her spare time and cannot stand when a man chews with his mouth open.

On top of all that, her Instagram page will make you totally envious. She's gorgeous, of course, and is an obvious jet-setter who posts photos in front of the Eiffel Tower, on the streets of Dubai, and on the beach in the Bahamas. She seems to be living a fab life and now she's ready to become a public figure in her search for love. Plus, based on a short clip she posted from her time on The Bachelor, she'll definitely be sticking around for a while: In it she wears a red bikini and leaps into Colton's arms before giving him a big kiss.

Tayshia’s introduction video doesn’t reveal too much about her preferences in a significant other, but her love for her career is evident as she talks about noticing people's veins when she first meets them. The soft-spoken bachelorette revealed that the corniest way she has been asked out was when a man dropped a sugar packet in front of her and said that she "dropped her nametag." Yeah, that is a terrible pickup line.

According to Life & Style magazine, Tayshia is also reportedly somewhat recently divorced. The publication obtained court documents that reportedly reveal Joshua Bourelle filed for divorce from Adams in October 2017 after approximately 18 months of marriage. Unfortunately, the public filing put all of her financial affairs on blast and Adams has yet to respond to any reports.

Honestly, though, it doesn't matter either way because she has the right to move on from her past and pursue love again. It remains to be seen if Tayshia will address any of this information on the show or if her past will be exposed by a fellow contestant looking to take her down, but it seems likely it will come up if she and Colton continue to get to know each other, since past heartbreak is a frequent topic of conversation during one-on-ones.

How far will Tayshia make it this season? Find out if she lands the final rose (and Colton’s heart) when The Bachelor premieres Jan. 7.