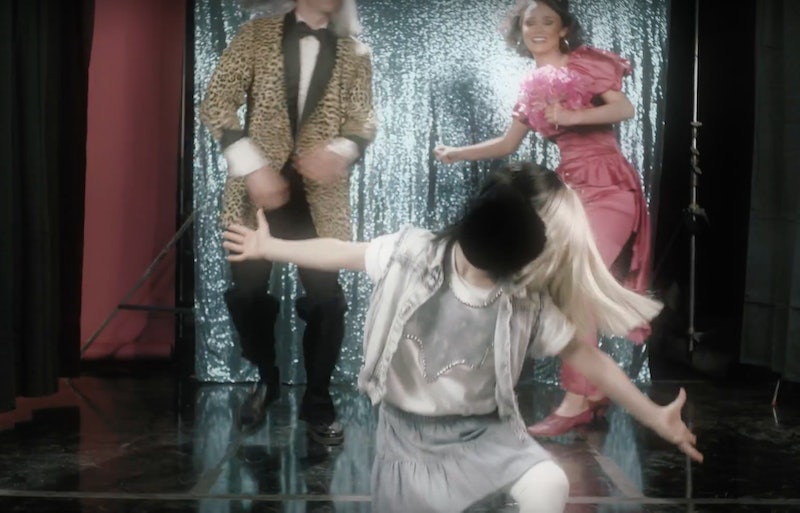 On Thursday, pop deity and occasional paper bag wearer Sia dropped a delightful lyric video for her This Is Acting track “Move Your Body." Not unlike the vids for tunes "Chandelier," "The Greatest," and "Elastic Heart," this new visual is a shining gemstone. A shining, AquaNet-shellacked gemstone. Set in the year 1987, a faceless kid in a two-toned wig dances around a shopping mall portrait studio like a mini Maddie Ziegler. But who is the dancer in Sia’s “Move Your Body” lyric video? If you happen to watch a certain Lifetime program about a certain dance studio, then you may recognize her.

No, it isn't Ziegler, but that is not too far off; though the dancer in the vid is significantly younger than Sia's Nostalgic For the Present tour mate, she is another Abby Lee Miller protégé. If you don’t touch that dial before the clip’s credits roll, you will get your answer... or, uh, I suppose I could just tell you. “Move Your Body” stars Dance Moms newcomer Lilliana Ketchman.

In Season 6, Ketchman joined the Dance Moms cast as a member of the ALDC Mini Team, and continued to be part of the seventh and final season of the Lifetime reality show. And now, just like former Dance Moms supernova Ziegler, she's leaping around in a hairpiece for a Sia music vid.

“The day is here!!” Ketchman posted on Instagram after the video dropped. “I am so proud and excited to announce that Sia's lyrics video for her AMAZING song Move Your Body...and I'm in it!”

You can see Ketchman in Sia's lyric video here:

A final parting note: that gold lamé fringe cowboy jacket thing is majestic and I need to know where I can find one of my very own.