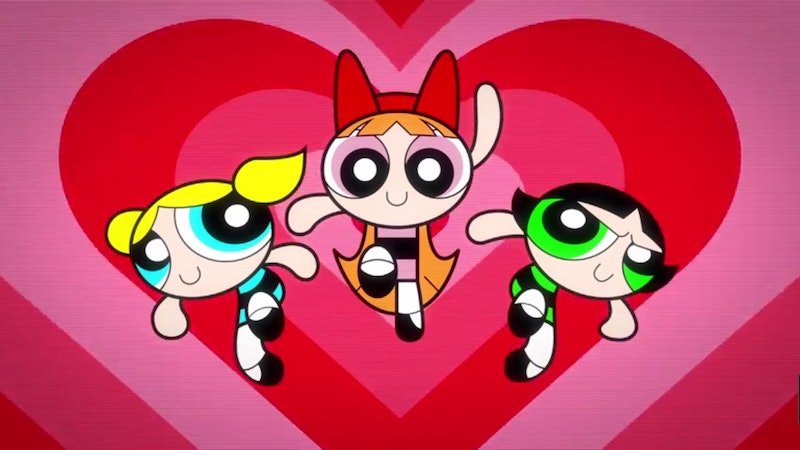 The coolest trio in Townsville is about to become a quartet. On Wednesday, Entertainment Weekly revealed a new Powerpuff Girl will be added to the iconic lineup during the five-part movie event The Powerpuff Girls: Power of Four. But who will the fourth Powerpuff Girl be? Fans have to wait until Sept. 17 to meet Bubbles, Blossom, and Buttercup's new team member, but classic fans are keeping their fingers crossed for the return of Bunny — you know, the original fourth Powerpuff Girl.

Way back in 2000, The Powerpuff Girls introduced a fourth sister named Bunny, who lasted for just one episode. She may not have been around for long, but Bunny was awesome. And even though she's gone, she's never been forgotten. In the episode, "Twisted Sister" the girls decide to create a new sister to help them with their hero duties. The formula they use to create Bunny isn't exact — they use a mix of artificial sweetener, twigs, and their personal ideas of what nice means with an added dash of Chemical X — but her imperfections make her all the more endearing.

Physically, she is larger than her sisters, and she doesn't have fully-formed language skills. However, she has a good heart, and can kick butt with the best of them. Because the formula used in her creation is so unstable, she explodes, leaving behind nothing but a single piece of her purple dress at the end of the episode. It's one of the saddest moments from the original series, which only makes the desire for a Bunny comeback in the reboot all the more appealing.

Don't get your hopes for a Bunny return up too high just yet, though. As wonderful as it would be to see the original fourth Powerpuff Girl return to the fold, her death was one of the series' most poignant moments. It's also one new viewers may not have seen.

Cartoon Network is keeping the character's identity under wraps until the first part of the movie event airs, so it's possible that a Bunny comeback is in the works. The new Powerpuff Girl's silhouette was revealed in a photo shared by EW, and the character does appear to be larger than the other girls. Plus, she's shaded in purple. Coincidence? Maybe. Or maybe, fans are finally going to get justice for Bunny.

Still, it's just as likely that the girls are getting an entirely new team member, and there's no guarantee that will she be sticking around after the special no matter who she turns out to be. One thing is certain: Whatever happens next, Powerpuff Girls fans will never forget the original fourth sister — the one and only Bunny.

More like this
“The Door Is Always Open” For Another 'Breaking Bad' Spin-Off, Says AMC Boss
By El Hunt
Emilia Clarke Shares More Details About The New 'Game Of Thrones' Series
By Maxine Harrison
S Club 7’s Jon Lee Continues To Reach For The Stars
By Rachel Mantock
The 'Hocus Pocus' Sequel Finally Has A Release Date & It Makes Total Sense
By Shannon Barbour and Radhika Menon
Get Even More From Bustle — Sign Up For The Newsletter