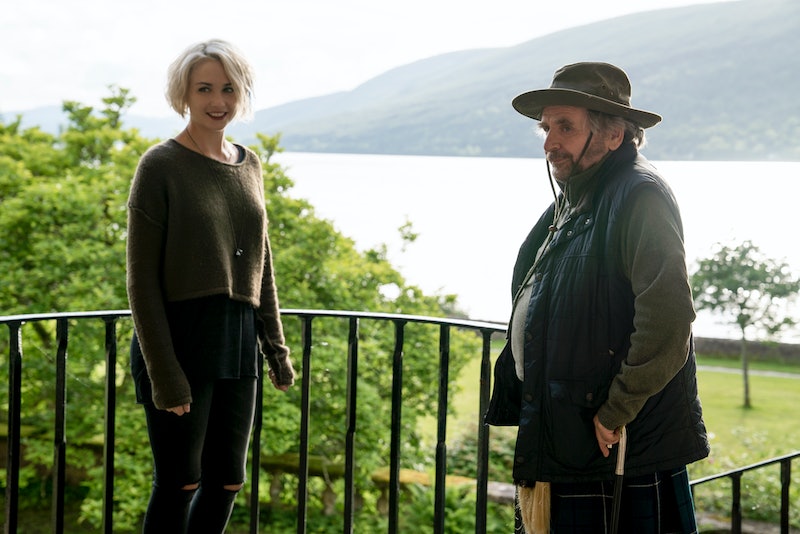 Just when the cluster think they have a handle on what being a sensate means, something new and strange gets thrown in their direction. For Riley that "something strange" means visits from an odd gentleman who calls himself only 'The Man Of Hoy." (Spoiler warning for Sense8 Season 2.) The man on the train reveals himself to Riley after the sensates have taken their psi-blockers in an attempt to escape BPO, but the stranger warns Riley and her cluster against feeling safe and tells them to keep an eye out for possible BPO traps. Who is Mr. Hoy on Sense8, what does he know about BPO, and how does he get into Riley's head in the first place?

It seems that Mr. Hoy (played by Sylvester McCoy) has a great many resources to his name, living in a castle with a library and a laboratory. And he's offering his connections to assist Riley and her cluster. He also seems to be a usually untrustworthy type, spouting off quotes like, "You can never remain free for 30 years by being the trusting kind." But he's convinced by Riley to offer his assistance in stopping BPO. But is he really on the cluster's side?

"Maybe after 30 years of surviving ... blockers and coffins and boxes, maybe I realized I'm slowly dying of survival," Hoy tells Riley while sitting in the little wooden box he keeps in his castle for private conversations. It seems that Mr. Hoy is done running from BPO and is ready to fight back. He taps into a vast network of sensates to instruct Riley on what to do to find the answers she seeks: go to Chicago. Soon after receiving these instructions, the sensates discover that Chicago is the location where everything took a turn for the worst for Angelica. Is Mr. Hoy leading Riley to certain doom?

It all seems a little too elaborate to be a hoax, and Mr. Hoy serves a very important purpose to the sensates, which is to introduce them to the larger species. While the cluster of eight featured in the show spend the first season learning about each other, the second season is focusing on how they relate to the world, the humans that are trying to kill them, and the other sensates who are going to help them survive. Mr. Hoy compares the global connection of sensates to Google, and when a connected sensate is looking for information an international game of "whisper-down-the-lane" commences until the answer is found.

The most common question I'm asking myself in Sense8, aside from "What is going on?", is "Can this person really be trusted?" With a group as powerful as the sensates who may one day have the ability to access all knowledge in the world, is there any reason to trust someone who isn't in your own cluster?

Mr. Hoy's first appearance in Sense8 seems to indicate that he's trustworthy, but the sensates will have to go much farther down the rabbit hole he introduces them to before they know for sure if he's on their side.

More like this
The 'Black Bird' Stars Are Both Heading Back To Apple TV+
By Brad Witter
Everything To Know About The HBO Max & Discovery+ Streaming Service Merger
By Brad Witter
The Bestselling Novel 'The Doll Factory' Will Be Adapted Into Thrilling TV Series
By Catharina Cheung
An Ultimate Guide To The Music Of 'Rap Sh!t'
By Brad Witter
Get Even More From Bustle — Sign Up For The Newsletter