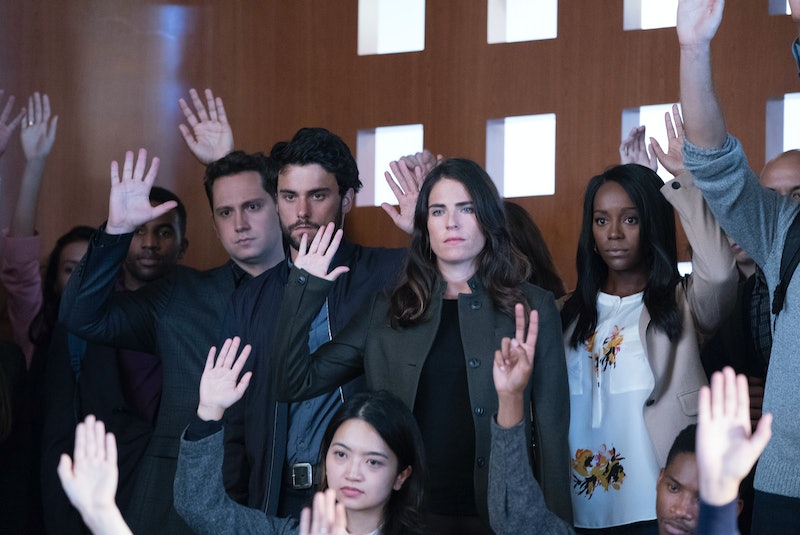 What will How To Get Away With Murder fans do if lovable (and very sexy) henchman Frank ever leaves the show? His death would be our loss, because without him, there’s no one on the show to grow a killer beard and also hack into mainframes and sleep with roommates and set up elaborate spy systems with just a snap of his gorgeous fingers. Who is “the one” on How To Get Away With Murder? Frank’s phone calls seem to go back to just one phone number.

When Gabriel Maddox, second-year law student and smarmy dude extraordinaire, came into the picture at the end of Season 4, Frank knew to be alarmed. He knew because it sure seemed like Gabriel was supposed to be dead, because he could be Bonnie’s son that she had 15 years ago and was told died at birth. Of course, we don’t know for sure who Gabriel is yet, but when Frank has a suspicion, he is — for better or for worse — going to act on it. And every time Frank moves forward in the case against (or for, because we really don’t know) Gabriel, he makes a phone call. In the second episode of Season 5, viewers saw that he was dialing “the one.” Say what?

Firstly, there are a lot of questions running through this viewers’ brain right now. Frank dialed “the one” very quickly when he first saw Gabriel, so is this something that Frank and company have been expecting for a long time, that Gabriel would come to Middleton to wreak death and destruction and debonair good looks on the college? When did Frank meet this person? Are she/he and Frank close? Is this a situation where Frank’s never met “the one” and he’s just doing his/her bidding? There’s so much that viewers have yet to find out, and, hopefully, as Frank’s investigation moves further and further, more will be revealed.

Frank slept with Gabriel’s roommate (he does a swirly thing in bed that he called “Hurricane Francis” and I died, resurrected myself, and then got up to write this piece) to get the roommate to kick Gabriel out of their apartment. Then, he had Gabriel move into the murder den across from where Asher lives — you know, the building murderous Rebecca lived in during Season 1? Previews for the next episode show Frank even going so far as to spoof Gabriel’s computer to see what he’s surfing.

While all of this is happening, Nate is conducting his own search into Bonnie’s files, as Bonnie’s sealed files talk a lot about her son and the fact that, well, he may very well be living, Frank and Nate are basically moving through the same motions, but on opposite ends — Nate thinks this is a missing persons case, and Frank wants to see if Gabriel is who Frank thinks he is. If they could only work together, this thing would be solved in an instant. For now, Nate will keep sneaking around, and Frank will keep making clandestine phone calls, and all will be right in the How To Get Away With Murder universe — that is, until that big, grand death is revealed.

More like this
Tim Miller From ‘The Texas Killing Fields’ Assisted With Another True Crime Mystery
By Grace Wehniainen
'Cheers' Stars Pay Tribute To Kirstie Alley After Her Death To Cancer At 71
By Jake Viswanath
Everything To Know About 'Monarch' Season 2
By Gretchen Smail
17 Photos Of The 'Wednesday' Cast Vs. The 1991 'Addams Family' Cast
By Grace Wehniainen
Get Even More From Bustle — Sign Up For The Newsletter