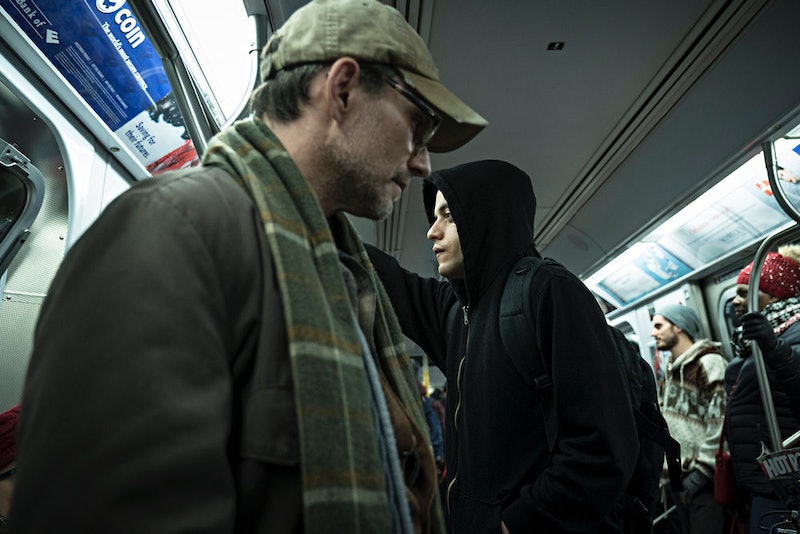 Spoilers ahead for Mr. Robot Season 4, Episode 2. Mr. Robot's core relationship has always been between Elliot Alderson and the titular figment of his imagination, but the final moments of Season 4, Episode 2 suggests that Elliot might have a third personality. The episode doesn't reveal who the "other one" is that Elliot's mom is referring to in the flashback, but it seems like there might be a lot more going on in Elliot's head than even Mr. Robot realized.

The ending of "Payment Required" complicates the hierarchy of Elliot's personalities a great deal. For starters, Darlene reveals that she told Elliot that Vera, the drug dealer who killed Elliot's girlfriend Shayla, was back in town. However, Elliot doesn't remember, which causes him to suspect that Darlene told him when Mr. Robot was in control. But Mr. Robot claims to have not been told, either. So who did Darlene tell?

This confusion is further complicated by the episode's final scene, which appears to take place in Elliot's head: a child version of Elliot plays in what looks like an E Corp boardroom while his mother speaks to him, explaining that they're waiting for someone. Young Elliot assumes they're waiting for Mr. Robot, but his mother clarifies it's actually "the other one." The scene ends there, but it strongly suggests there could be a third personality in the mix — which would explain who Darlene told about Vera.

We'll have to wait until the next episode for any more context, but here are some initial theories about this new development.

The Third Personality Is Angela

Elliot's third personality will still be Elliot, just as Mr. Robot is actually Elliot even though he looks like Elliot's father. If this new personality takes the form of someone familiar to him, it's possible that Angela could be the face the personality adapts. Angela's loss has left a massive impact on Elliot, just as the loss of his father inspired the inception of Mr. Robot, plus it would be an easy way for the show to keep a main character after her apparent death.

The Third Personality Is Sam Esmail, Creator Of Mr. Robot

While Mr. Robot has gone meta in the past (see: Season 4 premiere credits fakeout), some fans believe the show is saving its biggest twist for the end, and will reveal that Elliot's third personality is Mr. Robot creator Sam Esmail.

Esmail has made at least one cameo per season, suggesting that he's always been around Elliot. His most prominent role was in the Season 4 premiere, in which he administered a lethal dose of heroin to Elliot, twisting Elliot's catchphrase of "Hello, Friend" into "Goodbye, Friend" as he did so. Who else would know that Elliot says "Hello, Friend" to his imaginary friend but Elliot himself? Speaking of which...

The Third Personality Is You

Since the beginning of the series, Elliot has been talking to whoever is watching, but he's not talking to an audience. He's talking to one person, someone he only calls "friend," presumably you — the viewer. He's asked you why you kept information from him, he's asked you to help him look for clues, he's asked you to stay with him. Now, in Season 4, Elliot won't talk to you. If you are the third personality that is taking over Elliot's body, then it's clear you've got big plans for him that neither he nor Mr. Robot know about, which could be the reason he's no longer talking to you.

Whoever Elliot's third personality is, it's clear the control that Mr. Robot and Elliot fought so hard to find and maintain has been disrupted. Hopefully by the end of the season, audiences will find out if this third personality does, indeed, exist, who it is if so, and if they've been helping or hurting Elliot under his own nose.

More like this
Viktor Hargreeves’ Coming Out Scenes Are The Sweetest Part Of Umbrella Academy Season 3
By Gretchen Smail
Who Is 'Umbrella Academy' Star Elliot Page Dating After His Divorce?
By Jake Viswanath
What’s New On Netflix: Lana Condor’s Ghostly Comedy & A Sexy Reality Series
By Arya Roshanian
Lizzo Proved She’s Team Jeremiah During Her ‘The Summer I Turned Pretty’ Review
By Grace Wehniainen
Get Even More From Bustle — Sign Up For The Newsletter