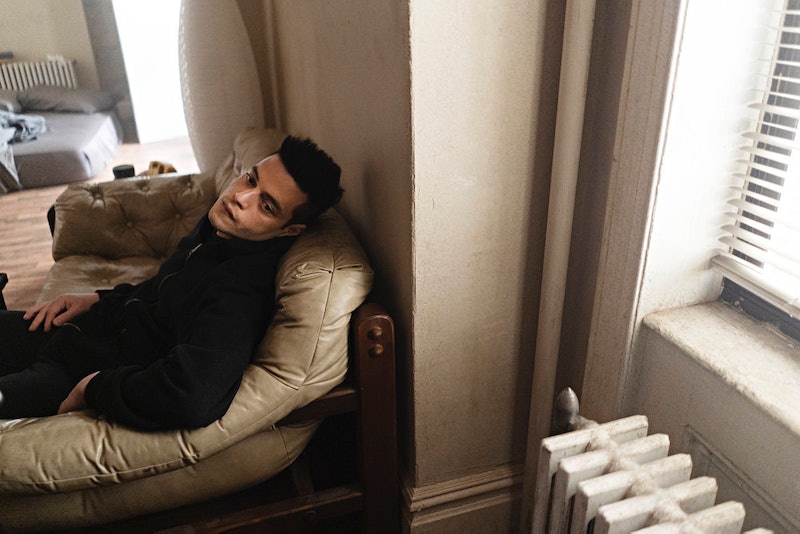 With a lead character as suspicious and untrustworthy as Elliot Alderson, Mr. Robot has fueled fan theories for years. And though the final season has yet to start airing, there are already a number of Mr. Robot Season 4 theories on Reddit. Beyond the unreliable narrator of Elliot, showrunner Sam Esmail has intentionally turned Mr. Robot fans into conspiracy theorists. He packs the show with Easter eggs and references that only the most devoted viewers pick up on — and subsequently use to fuel their wildest speculations. Mr. Robot has proven over the years that no hunch is too outrageous, so the Reddit community is having one last hurrah ahead of the Season 4 premiere on Oct. 6.

The USA show is based on the streets of New York and the cyberspace of hacking. But Season 3 seemed to be veering into science fiction with time travel and parallel universe theories picking up steam due to Whiterose's machine. But whether you're for or against that new direction, there are a lot of other things to theorize about ahead of Season 4. Here are some of the most compelling ideas Redditors have floated thus far — with more assuredly to come as the season presses on.

More like this
‘Squid Game’ Creator Hwang Dong-Hyuk Just Dropped A Major Season 2 Tease
By Brian Anthony Hernandez and Bustle Editors
'Stranger Things' Season 5 Will Echo Season 1 In A Key Way, The Duffer Brothers Confirm
By Kadin Burnett and Sophie McEvoy
What's New On Netflix: A Third '365 Days' Movie & Lili Reinhart’s New Film
By Arya Roshanian
Megan Thee Stallion Actually Auditioned To Be This 'P-Valley' Main Character
By Radhika Menon
Get Even More From Bustle — Sign Up For The Newsletter