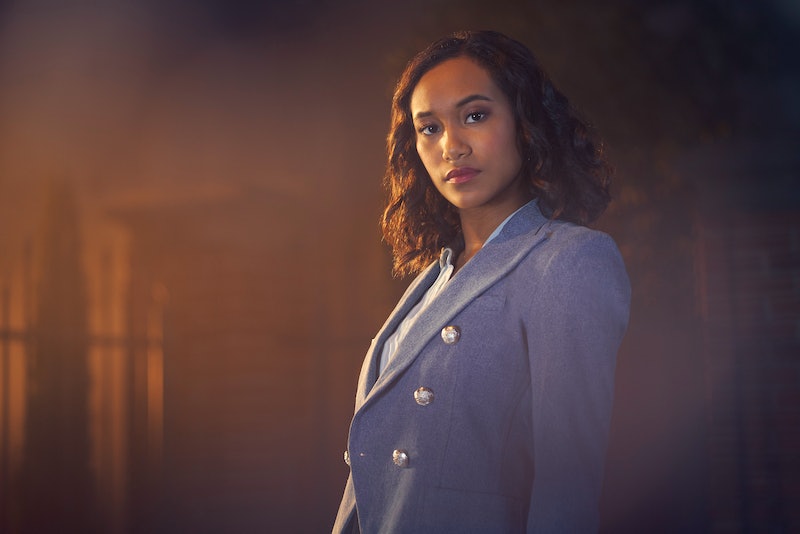 It seems like there's a new Big Bad on PLL: The Perfectionists, the Pig Man. As Dylan said during the April 24 episode, "that [name is] not nearly as scary sounding as it needs to be," because this villain is straight out of a horror movie. Literally, since the Pig Man was hiding out in the sewer and used a balloon to taunt and distract its targets. Stephen King's It, anyone? Sydney Park, who plays Caitlin, says in an interview with Bustle that the Pig Man is also the show's own little nod to American Horror Story, which had a terrifying character named Piggy Man in the Roanoke season. "It’s a really interesting, cool villain but scary," Park says.

Dylan and Ava encountered the Pig Man in the sewer while trying to get Mason's dropped phone, but someone beat them to the punch. Dana Booker conveniently popped up in the same area where Dylan and Ava had just escaped the Pig Man. Coincidence? Caitlin acknowledged as such when she later said to Dylan and Ava, "Are we saying that Dana dressed up as a pig to scare you guys in the sewer, because that's extreme." She's right, but someone also did try to kill Caitlin with their car, so extreme is where we're at.

Still, who was in that pig costume "with bulging eyes that's gonna haunt my dreams forever," as Dylan put it? As always with this show, there are a lot of suspects. Park says that fans "most definitely" need to keep their eyes open and on pretty much everyone. "You can’t really trust too many characters in this show because [they] just all really do keep secrets," she says. "There are a few 'A's if you pay close attention," she adds, referencing the main villain of the PLL series. She says that on The Perfectionists, Beacon Guard is kind of like the Beacon Heights version of A — always watching, always tracking.

Speaking of tracking, at the end of the episode, Mona discovers that Nolan (or his tracker, at least) is pinging at her apartment. But don't go thinking that the show has another faked death twist on its hands. Showrunner I. Marlene King told Us Weekly that Nolan is definitely dead. "There’s no coming back from that," she said. But she added that Nolan will be involved in some episodes, so fans will likely find out soon why Nolan's tracker is still on and at Mona's house. "It’s not the last you’ve seen of Nolan even though he’s no longer currently living on this Earth," King said.

And while Nolan may not be alive to torment the Perfectionists any longer, someone (or multiple someones) certainly is. Right now, Dana Booker is at the top of that list, and Park says her story is only just beginning. "I think Dana is onto something. She’s suspicious about someone for a reason," Park hints. "I think she’s smart and that’s what is so alarming to the Perfectionists. She figures things out really fast. But I think people can underestimate her. You’ll see her in the finale, there will be some questions answered and some things you think are resolved but really they’re not."

Each week, the "villain" torch seems to get passed from one character to another. Now that Mason has Caitlin convinced that he didn't hit her with his car, the Perfectionists are left wondering if it was Dana. Whoever it was, Park says fans will learn the answer soon. "It's going to remain a mystery for a little bit, but many other questions will be answered."

Hopefully one of those questions that's answered is WHO. IS. THE. PIG. MAN? Because seriously, what? Park agrees. She says when she was reading the script she was like, "Who is this Pig Man? What’s going on?" What's going on, indeed. However, if you were hoping that the totally strange and creepy villain would become a staple character on the show, you may be disappointed.

Park says that "Caitlin does not come into contact with the Pig Man," this season. And her character said something at the end of the episode that made it sound more like the real villain was using the Pig Man as perhaps a one time message to scare the Perfectionists. "It was a warning, right? Someone out there has our secrets and they want us to know it," Caitlin said.

Even as the Pig Man (or whoever was wearing the costume) sought to try to terrorize the Perfectionists, they vowed at the end of the episode to stand completely in support of one another. They're going to do "whatever it takes" to put this behind them. When Park is asked what that phrase "whatever it takes" may mean for the Perfectionists, she says, "It means just protecting each other and knowing that, you know, the killer is not amongst them three." She adds, "Finally the Perfectionists are kind of reuniting and just understanding that they should be a team at this moment."

It's going to take a team effort to thwart Dana Booker, since seemingly she's always one step ahead of them, and to deal with whatever wild villain shows up next as another warning. And even if this is the last time fans see the Pig Man, his bulging eyes will stay with Dylan and us forever.