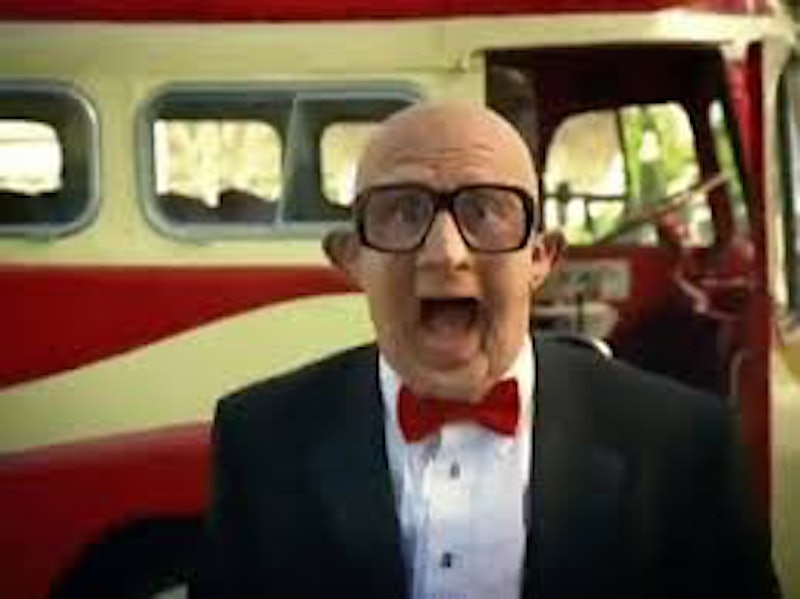 As a kid, nothing got us excited quite like a Six Flags commercial — the Venga Boys music, the excitement, the party bus, the old man who knew how to bust a serious move. But did you know that the dancing old man from the Six Flags commercials was not, in fact, an old man? He's not the wrinkly, bald little grandpa we all thought, and suddenly, my childhood was a web of lies. It was the best kind of lie, though, because the old guy from the Six Flags commercial is actually renowned choreographer and performer Danny Teeson, who is not only not an old man, but boasts an extensive resume of work beyond Six Flags that you've definitely seen elsewhere. Teeson was kind enough to speak with Bustle about some of his experiences.

Now, I'm not one to judge a person on their looks, but sue me: a gorgeous smile and bulging muscles just do something to set my heart en fuego. That made it all the more shocking that this is the true identity of Mr. Six.

"Yes, initially, there was a big shock surrounding it," Teeson tells Bustle via email of people's reactions to learning he was Mr. Six. "The first few years, I had a hefty NDA agreement with my contract, which only garnered even more curiosity."

"People speculated whether it was really an old man. One publication said it was Paris Hilton," Teeson writes to Bustle. "It was fun when friends around me found out that I had a completely secret alter ego as Mr. Six. It’s still fun and surprising when they do all these years later. I actually did one job at the Dallas Park as Mr. Six dancing next to a friend I had known for 20 years, and she had no idea it was me until I told her years later."

While Teeson is making headlines more than 10 years after Six Flags ended the Mr. Six campaign, he modestly insists it's not about him: "It’s not really me who gets the attention, until now, to be honest. It’s him, Mr. Six."

According Teeson's website, he's an England native who studied jazz, ballet, tap, singing, and acting, among other theatrical skills. After making a name for himself in theater, he took his talents to TV and film, and ended up choreographing for the likes of Carrie Underwood, Kelly Clarkson, and Paula Abdul. Paula! He founded Danny Teeson Productions and now resides in Los Angeles.

Are you ready for this? Here's your Mr. Six.

He would be the second gentleman from the left.

While Teeson is now very well known in the industry and keeps busy hanging out with cool people like Mel B, he hasn't forgotten what it felt like to get the role as Mr. Six. "Unbelievable!!" he says of his reaction to getting the part. "I actually cried because it was such a big deal at the time and the contract was for three years, which is amazing in my industry. I never thought I was going to get it." It's a memory he still deeply cherishes to this day. While Teeson names working as creative director for Carrie Underwood for four years as one of his career highlights, if he had to pick the most memorable, it would be "this one as Mr. Six, because it was a really special time for me and I got to have amazing experiences being a rock star in disguise. LOL."

The disguise was a good one, too. Six Flags wasn't exactly racing to reveal the identity of Mr. Six, and to this day reportedly keeps their lips sealed about who played the iconic dancing elder. For years, we've all speculated about the person behind the wrinkles.

One theory floating around was that it was really Jaleel White, AKA Steve Urkel — understandable, considering White also knew how to boogey. Others thought Mr. Six was possibly played by a woman, which would've been pretty epic. It was Paul Davidson, though, who was potentially the first to share that anonymous sources confirmed the truth: it's Mr. Danny Teeson who danced his way into our hearts all those years ago.

Teeson was perhaps at the peak of his Mr. Six fame toward the end of 2005, which is when — Davidson says — Six Flags ended that campaign and did away with Mr. Six. He probably went back into retirement or something. It's hard to keep up with such a grueling dance schedule, and party buses are harder to drive than you think.

Don't worry about Teeson, though. He keeps very busy these days: "I work as a director and choreographer for the Disney Channel and directed Zendaya in KC Undercover, and I create huge theatrical shows for Princess Cruises for their 1,000-seat state of the art theatres. I love working there as I get to do some of my most advanced creative experiences. I’m currently working with 20 drones in one of my shows, which is really fun!"

Whether he's Mr. Six or working next to Zendaya, Teeson continues to spread happiness everywhere.

More like this
The 'Hocus Pocus' Sequel Finally Has A Release Date & It Makes Total Sense
By Shannon Barbour and Radhika Menon
TikTok’s “Miley Stewart Summer” Trend Will Make You So Nostalgic
By Courtney Young
David Schwimmer Doesn't Remember This Classic 'Friends' Episode
By Sam Ramsden
Hayden Panettiere Will Return For 'Scream 6': "We F*cking Won, Scream Fam"
By Jack Irvin and Jake Viswanath
Get Even More From Bustle — Sign Up For The Newsletter