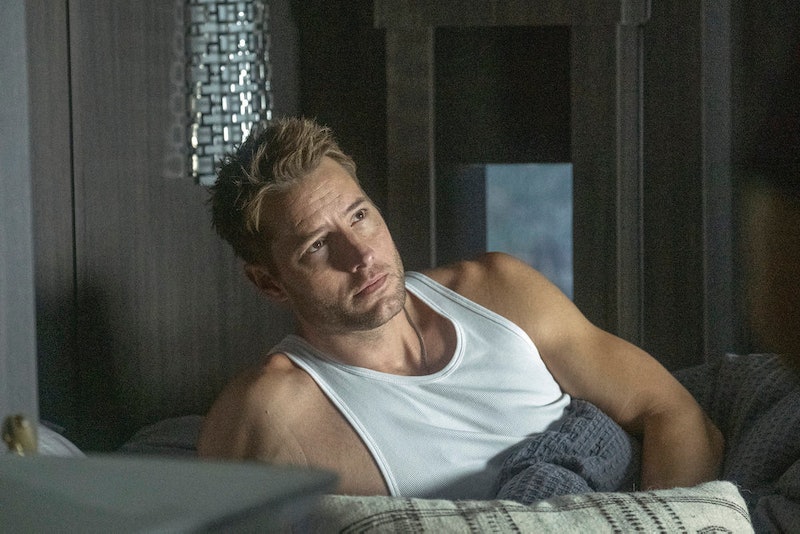 Spoilers ahead for This Is Us Season 4, Episode 11. The big This Is Us reveal for this week's episode is that Kevin — who a single episode ago was convinced he'd never have love — may have found it after all. When he was on the phone with Randall, a wide shot revealed a woman in Kevin's bed on This Is Us. We could only see her hair, but there are a couple of possibilities about who this woman might be.

For one, it could be someone random. Kevin had been trying to use a matchmaker and he's also charming enough to pick someone up in a bar (or anywhere) and take them home to take his mind off trying to find "the one." But it's more likely someone he has serious feelings for. As Kevin talked to Randall on the phone, Kevin told him, "I'm kind of in the middle of a whole thing. It's been a hell of a week." That's probably not something you say about a random hookup that doesn't mean anything.

According to Deadline, creator Dan Fogelman said at a TCA panel that this season will reveal who the mother of Kevin's child is, which means the person in Kevin's bed is may very well be her. "The story who is the mother of Kevin’s child and all that journey will be a story in the back half of the season, and there will be an answer by the end of the season," Fogelman promised.

With that in mind, could it be that Sophia Bush's character Lizzie decided to follow through on her hall pass and meet back up with Kevin? He romanced the married Lizzie with a private John Legend concert for gosh sakes. Maybe she decided to throw in the towel with her husband and date the hot famous actor who's friends with John Legend. Honestly, we couldn't blame her. It's not clear if Sophia Bush will be back for any more episodes beyond the one she was introduced in, but Deadline did say her role was "recurring," which would suggest that she sticks around a bit or returns at some point this season. Fogelman refused to comment when asked if Lizzie becomes Kevin's fiancée, so there's a chance.

However, the other main person it could be is Sophie, Kevin's childhood sweetheart whom he married as a teenager. They later got divorced but all of their interactions suggest there are still feelings there between them. And, she called him in the previous episode — perhaps they met up? After all, many people involved with the show have suggested that Sophie isn't to be ruled out as Kevin's happily ever after.

Sophie actor Alexandra Breckenridge said to Cosmopolitan during Season 2 that she believes the duo can go the distance. "Kevin and Sophie, they've loved each other since they were kids. They've been off and on since they were children. I think that eventually it's gonna work out for them, or at least I hope it does. I think they have a bond that's kind of unbreakable."

Then, ahead of Season 3, Fogelman told Us Weekly, "I would not count Sophie out at all." And most recently, in October 2019, executive producer Elizabeth Berger said fans could "potentially" see present day Sophie again.

Kevin tried finding lasting love with new people via his matchmaker, and none of them were a match. Then he tried to let the universe lead him to love and he found Lizzie — who was just going to use him as a celebrity "hall pass" with the permission of her husband. By contrast, Sophie is a familiar love. She's been there from the beginning and through everything. She would never treat Kevin like a "hall pass" because she knew him before he was even famous. He's not Kevin the Manny to her. He's just Kevin.

Sophie would also help fulfill Kevin's desire for a "crazy love story" like his parents had. His romance with Sophie started off on a similarly bumpy road. But just like Rebecca and Jack's relationship grew into something beautiful, Kevin's life with Sophie could do the same. So even if you kind of want to see Sophia Bush again, it makes more sense that it's Sophie and not Sophia in Kevin's bed.

More like this
Ozzie’s Coming Out Scene With Kitty On 'That ’90s Show' Has Twitter Sobbing
By Brad Witter
Here’s Everything Coming To & Leaving Netflix In February
By Jake Viswanath
Shonda Rhimes Responded To The Surprise Exit Of A Day 1 'Grey's Anatomy' Figure
By Grace Wehniainen
Everything To Know About A Potential 'Lockwood & Co.' Season 2
By Gretchen Smail
Get Even More From Bustle — Sign Up For The Newsletter
From hair trends to relationship advice, our daily newsletter has everything you need to sound like a person who’s on TikTok, even if you aren’t.