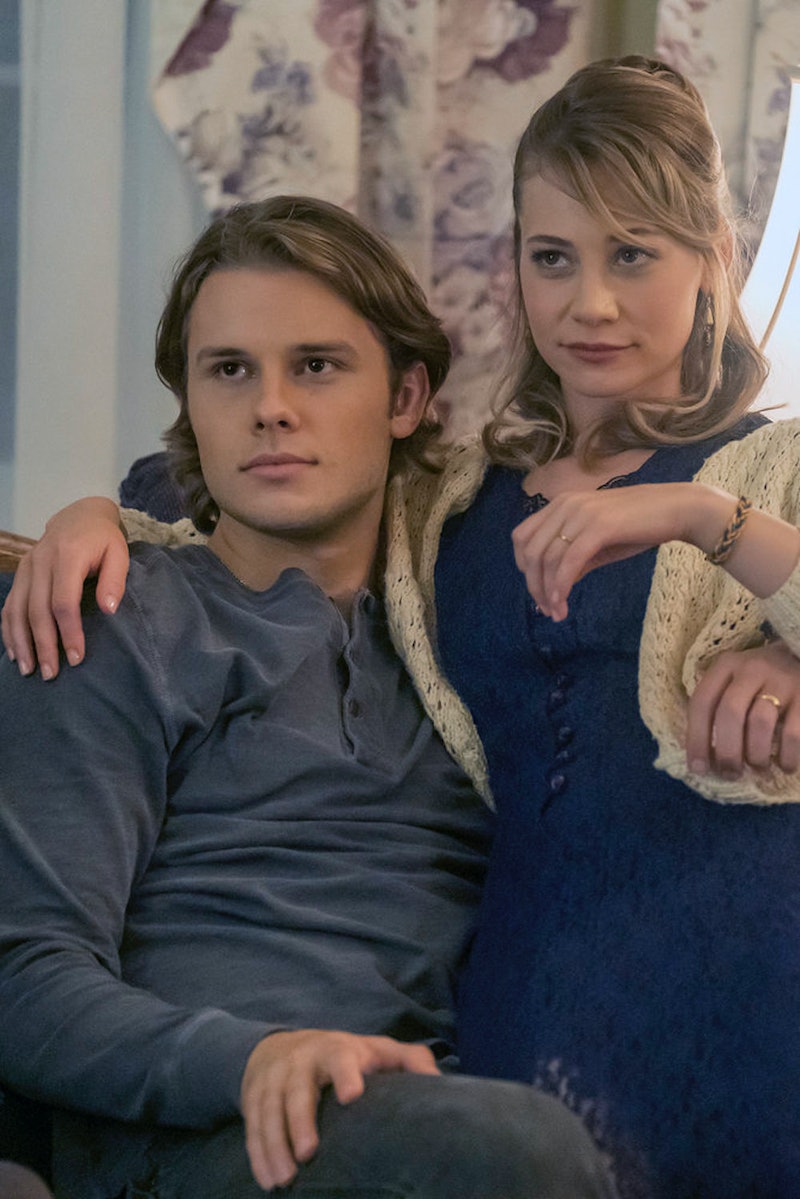 This Is Us loves a big, dramatic reveal, and during last week's episode, one came at the very end: Kevin and Sophie were married. This happens during the time period when the Big Three are around 19 years old and when Kevin is living in New York, so the news comes as quite the surprise to his mother and siblings. It's also a surprise for viewers, because This Is Us hasn't featured Kevin and Sophie's relationship for quite some time, and now they're married all of a sudden?!

I mean, fans knew that they were married once upon a time, but it's been so long since Sophie's been on the show, making this new plotline all the more surprising. In the present day, Sophie and Kevin are divorced, and, since their split, they have tried to work things out multiple times. And in the far past, we know that they were kids who went to elementary school together.

What else has gone down? Here's a refresher on everything This Is Us has told us — so far — about Kevin and Sophie.

Kevin met Sophie through Kate, because the two girls were best friends as kids. In the Season 1 episode, "Three Sentences", in which the three siblings have their tenth birthday party, Kevin has a crush on Sophie and wins her over. (Well, in a 10-year-old sort of way.) It seems like from that point forward, they were close.

How Long They Dated

It's not really dating when you're 10, but it seems like Sophie and Kevin dated throughout their teen years, all the way up until they got married. In the Season 2 episode "That'll Be The Day" (aka the episode with the Crock-Pot fire reveal), Sophie and Kevin are together as high schoolers. The Season 1 episode "I Call Marriage" references them being together in eighth grade.

And, in the modern day portion of that episode, Sophie says to Kevin after a second try at their relationship, "We tried to squeeze a puzzle piece in because it fit once when were kids. You really want to make amends? Just leave me with the past. Let me remember you at 10 or 17 or 20. Just let me remember you when it was good." Heartbreaking.

When They Got Married

How Long They Were Married & Why They Divorced

During Season 1, we find out that Kevin and Sophie have been divorced for 12 years. At that point, they would have been around 36 years old, meaning they divorced when they were 24 — that's about five years of marriage. They split up because Kevin cheated on her. After that, he moved to L.A. and got his acting career off the ground.

Why They Broke Up The Second Time

After giving it another shot 12 years after their divorce, Kevin and Sophie broke up again. During their second time around, Kevin struggled with his drug and alcohol addiction, and decided to end things with Sophie, because he felt since he couldn't take care of himself, he couldn't be healthy in a relationship or take care of children. He tells Sophie in the Season 2 episode "The Most Disappointed Man" that he's "an empty shell" and even adds (via EW), "When I dream of our future together, Sophie, it’s a nightmare for me."

When We Last Saw Sophie

Adult, modern day Sophie last appeared in "Don't Take My Sunshine Away" (Season 3, Episode 16). In this episode, Kevin confided in Sophie about the fact that his girlfriend at the time, Zoe, didn't want to have children. We also found out that Sophie was engaged, which Kevin congratulated her on by giving her and her fiancé Billy Joel tickets. Additionally, this episode showed young Kevin and Sophie having their first kiss at a school dance.

Now, we know that the concert ticket gift wasn't the end of Kevin and Sophie's story on This Is Us. It just remains to be seen how much of of that story will take place in the present, and whether it has anything to do with the son Kevin has in the future.