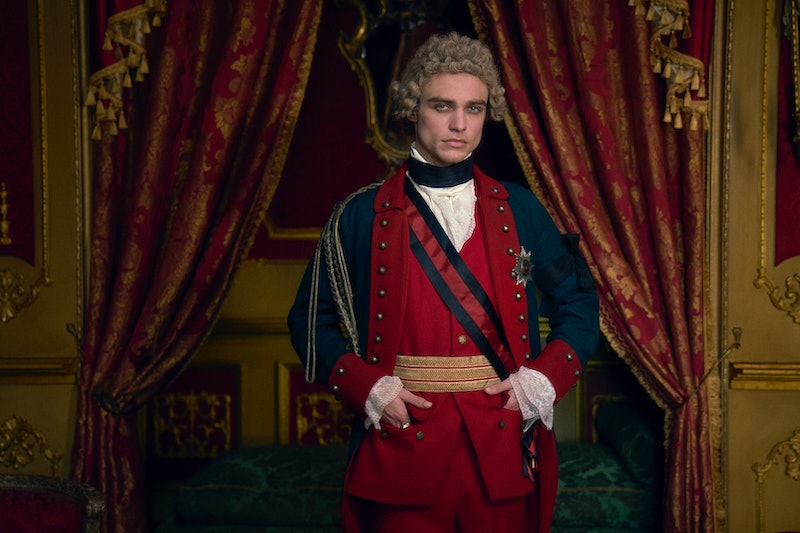 A scandalous period drama filled with amazing outfits, shocking storylines, and the icon that is Dame Helen Mirren. There isn’t much more I could want from a new series. Tonight (Oct. 3), the much anticipated Catherine The Great starts on Sky Atlantic. The cast is full of super recognisable Hollywood stars but there are a few fresh faces you may not recognise. Like, for example, who is Thomas Doherty? The actor who plays Peter Zavadovsky in Catherine The Great is one of the industry's most exciting rising stars right now and you’re definitely going to see a lot more of him in the coming months. If you’re a fan of scandal, deception, and drama then Doherty brings it all in Catherine The Great.

He may be playing a Russian Court favourite in Catherine The Great but Doherty is originally from Edinburgh, Scotland. In 2012 he attended the MGA Academy of Performing Arts and in 2015 he graduated having studied musical theatre.

After leaving the MGA Academy, he split his time between auditioning for roles and starring in productions at the Edinburgh Fringe Festival. In 2015 he starred as the Prince in the onstage comedic adaptation of E. Nesbit’s short story The Last Of The Dragons. He also went on to star in a series of short films including taking the role of Neil Tucker in Lord Of The Dance.

Speaking about his love of acting with the The Herald, Doherty said, “while I was seen as a football player, no-one was aware I also did musical theatre, I’d have my books and packed lunch at the top of my bag but at the bottom I’d hide my tap shoes. On Saturdays, for example, I’d go to musical theatre from nine ‘till one and then rush off to the game.” He continued:

“Then during the week I’d turn up for musical theatre with my knees all cut and bruised. It was all a bit Billy Elliott. But I loved both.”

In 2017 Doherty landed the role as Sean in the Disney series The Lodge. This launched his career with Disney as he then went on to star as Harry Hook, son of Captain Hook, in Descendants 2 and Descendants 3 on the Disney Channel. The series, which follows the children of all of your favourite Disney villains, will have you hooked, whatever your age. Talking about his role to The Herald, Doherty said, “you forget he’s the son of Hook, and don’t think about the pirate ship. What I want to come across is he’s a young man with a lot of problems–peer pressure, father pressures, and loss in his life. And this manifests itself in anger and aggression. But it’s all good fun.”

And it isn’t just his acting talents that have garnered Doherty some fame. He was named one of the 50 hottest boys in the world by Vogue in 2017. And, TBH, it's hard to deny that his boyband good looks. However, Doherty isn’t a single man. He is dating fellow actor and Emmy Award Winner Dove Cameron and they will hit you right in the feels on Instagram.

Pretty accustomed to grand clothing and makeup after playing Harry Hook, Doherty is swapping the sea for grand Russian palaces. In Catherine The Great he will star as Peter Zavadovsky. A favourite in court and confidant to the Empress, Zavadovsky was also a lover of Catherine The Great. Starring alongside Doherty and Helen Mirren will be Jason Clarke, Joseph Quinn, Gina Mckee, Rory Kinnear, and Richard Roxburgh, all in leading roles.

If you want to catch Doherty in action alongside Dame Helen Mirren then you can watch the first episode of Catherine The Great on Sky Atlantic at 9 p.m tonight. If you’re a period drama nut with a penchant for all things scandalous, this isn’t one to be missed.