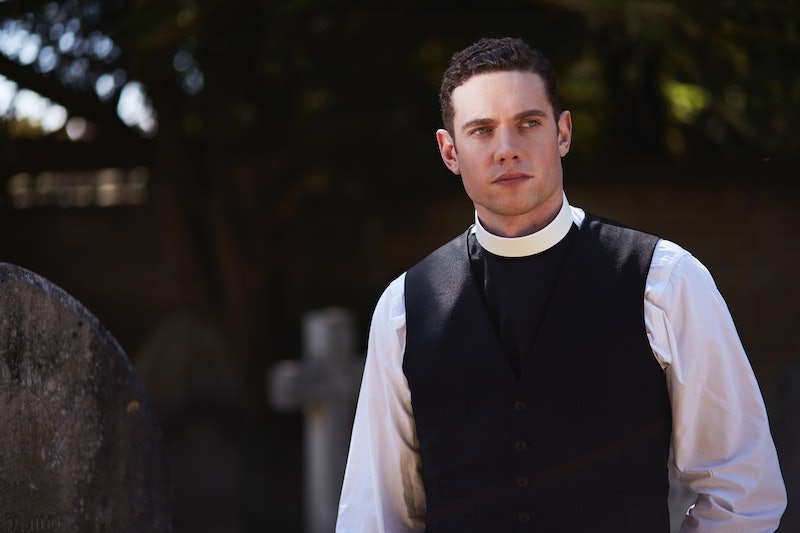 The latest series of Grantchester is back on ITV1 this Friday, and fans are no doubt looking forward to the return of Reverend Sidney Chambers. Joining the fourth series of the hit crime drama is Tom Brittney, whose character is set to take over as the show's leading role once actor James Norton makes his final appearance. But who is Tom Brittney?

According to the Morton Report, Brittney was born in Gravesend, Kent, and began training as an actor at the Royal Central School of Speech and Drama in London. In the new series of Grantchester, the 28-year-old will portray clergyman William Davenport, but viewers may recognise him from shows such as BBC lottery drama The Syndicate, U.S. satire UnReal, as well as the hugely popular time-travelling series Outlander.

When discussing his character in the new six-part series of Grantchester, Brittney revealed to the Radio Times:

"You only get to see a bit of who he is. What drives him is that he wants to be a good person and wants to help people by being a wonderful vicar that people love and trust." The young actor continued: "There’s a dark past underneath that makes him that way. William has flaws and things he’s running away from. There are places that we go to which are quite upsetting. A lot of stuff comes out about him and that was really hard to play. That was quite depressing, but fun to watch I think."

The character of William Davenport is set to take over as the series lead once Sidney Chambers departs Granchester forever. James Norton, who plays Chambers, recently spoke about the bittersweet experience of filming what will be his final season. According to the Radio Times, he said, "As excited as I am to be filming a new series of Grantchester, it’s also heartbreaking to be saying goodbye to Sidney Chambers," and added "I’ve loved this experience, and particularly working with such an extraordinary cast and crew."

It currently isn't known exactly how or when Chambers will leave during the fourth series, but Norton's co-star Robson Green, who plays Detective Inspector Geordie Keating in the ITV series, has revealed that the leading character's departure will indeed be an emotional one: "There wasn’t acting required," Green told the Radio Times. "James is an intelligent, charismatic, joyous person to be alongside, and it’s hard to say goodbye to someone you’ve shared door go your deepest feelings and thoughts with. It was so beautifully written and so powerful on so many levels. It was very poignant."

The series creator, Daisy Coulam, discussed some details about the upcoming season during a PBS podcast, and revealed that there will be some major changes. She said: "The world is changing, people are changing, and we decided to make that a theme of the series." The fourth series is set in 1956, in a world where Elvis has his first number one, Teddy Boys are inspiring new fashion trends, and life beyond the small village of Grantchester is moving quickly.

Grantchester airs this Friday on ITV1 at 9 p.m.