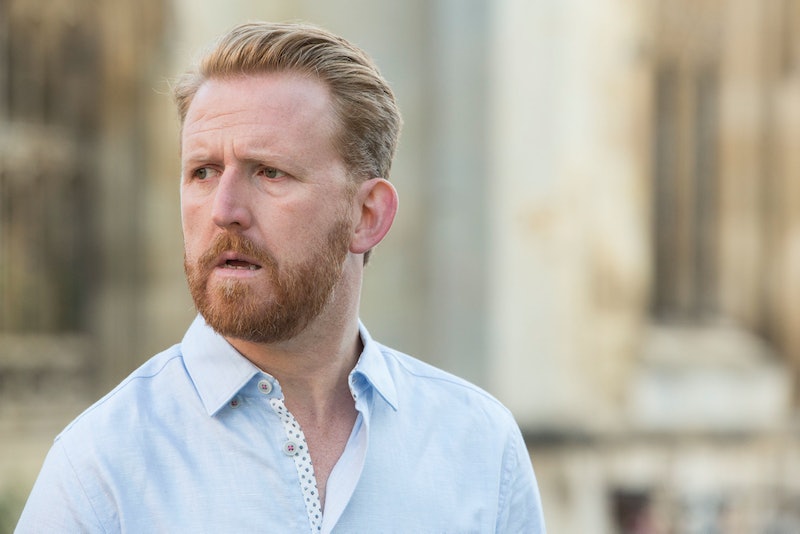 Just when you thought your TV schedule was packed enough, ITV went and produced Cheat, a gripping psychological thriller that's four parts over four days. Yeah, so you better clear your diary, cause it's about to be lit. Bringing not only edge-of-your-seat levels of twists and turns, but also some of the UK's finest actors. One in particular will be super familiar to any period drama fans, but who is Tom Goodman-Hill?

Goodman Hill is most recognisable for his role as Mr Grove on department store period drama, Mr Selfridge. Not the biggest period drama fan? Then you might well recognise him as Joe Hawkins on Channel 4's hit sci fi drama, Humans.

Goodman-Hill began his professional career as a teacher before choosing to go into acting and his career has been on the up ever since. He is married to fellow actor Jessica Raine who is best known for her work on Call The Midwife, but more recently has been starring in Baptiste. The pair share two cats and a baby so in fairness it's pretty impressive that they even have time to star in some of the biggest shows on telly at the moment.

But what's this Cheat all about? The thriller is set in a university and has all the mystery, tension, twists, turns, and basically cray happenings that make a show seriously gripping. Katherine Kelly, formerly of Coronation Street, stars as university professor Leah who sees a strange turn of events unfold with her student Rose played by Molly Windsor.

Leah prides herself on her academic strength and integrity, being a part of a legacy within the university as her father also lectured there. She is not only focussed on her career but trying for a baby with her husband Adam, played by Goodman-Hill. All this while secretly lusting after a colleague at the university. However, everything she knows is set in a tail spin when she queries one of her students' dissertations.

Rose is the daughter of a super rich but emotionally abusive man called William, played by Bottom star Adrian Edmonson, whose donations to the university mean she is largely untouchable. However, Leah chooses to address the alleged plagiarism and challenge Rose's ability to finish her degree. And how does Rose react to this? Why by setting off a trail of revenge and chaos that sees one of them, seemingly, in prison at the end. But y'all which one? And why?

The show was filmed in Cambridge, although the programme is not set there. The show is set in a fictional university, but you still get all the gorgeous scenery. Scenery that was set during the summer of record breaking temps the UK had last year. So not only will this show be thrilling AF but also a very lovely walk down memory lane re sunshine and lollypops.

The trailer shows a lot of blood, police asking all sorts of questions, body bags, and seemingly a heap of high level emotions, AKA a shed load of entertainment before you have even got to the weekend. I know right — I can't wait.