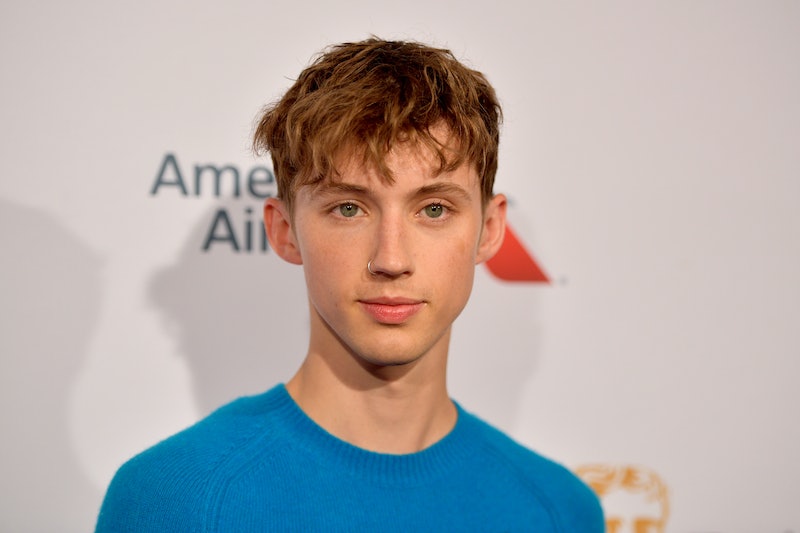 From hit songs to a role in a major film, it's been a big professional year for Troye Sivan. The singer is thriving in his personal life as well, as Troye Sivan is dating model Jacob Bixenman. The two stars have been together for a long time, and it's clear the couple have a strong and supportive relationship. According to Attitude, Sivan and Bixenman met at a fashion show two years ago, and have been inseparable ever since. The couple now live together in Los Angeles, where Bixenman is a photographer and filmmaker in addition to modeling, according to his website.

On Sunday, Jan. 6, Sivan and Bixenman may appear at the 2019 Golden Globe Awards together. Sivan is nominated for the best original song in a motion picture for his track "Revelation" from Boy Erased. The film follows a pastor's son named Garrad who is outed to his family and must endure a cruel conversion therapy program. Sivan based the song on a scene from the film where Garrad has his first positive romantic experience with another boy, according to Billboard. The nomination is a major step for the singer, who also has a supporting role in the film, and it seems likely his boyfriend will be by his side on the important night.

The Golden Globes wouldn't be the first time Bixenman has been the singer's biggest supporter. In August, he shared a supportive message on social media for the singer on the release date for Bloom. The model shared a photo with Sivan on Instagram, writing, "I'm so proud of you, Today and every day." Sivan also teased "Animal" with Bixenman's help, giving a sneak preview of the song along with their home video footage. On Twitter, the Boy Erased actor posted a short video and song clip that included several sweet moments between the couple.

The preview for "Animal" was not the first time the couple collaborated either. In 2017, Bixenman had a cameo in Sivan's music video for "Heaven," and the appearance shows just how meaningful the relationship is to the singer. In June, Sivan gushed about his boyfriend's personality in an interview with Attitude. "I don’t know, I mean, I think he's got like a kind of energy about him, a magnetic sort of energy," Sivan said. "I think people can't help but love him. He's just got one of those personalities that draws people in."

Bixenman might look familiar to fans of Sivan from more than the singer's videos, as the couple often share moments from their life together on social media. In December, Bixenman shared a funny photo with Sivan, in which he wears goofy sunglasses. Back in June, the model also shared a special birthday message for the star. On Instagram, he shared a film photo posing with Sivan, and wrote, "HBD to the greatest" with a heart emoji. Sivan also shared an adorable selfie with his boyfriend back in November, writing simply "Hello".

The Golden Globes could be a big night for Sivan, but it's not yet clear if he'll bring his boyfriend along for the evening. On Friday, Sivan said he plans to bring his sister to the award show, according to Variety. Even if Bixenman doesn't make an appearance on the red carpet, it's likely he will be ready to show love and support for Sivan should he take home the award.