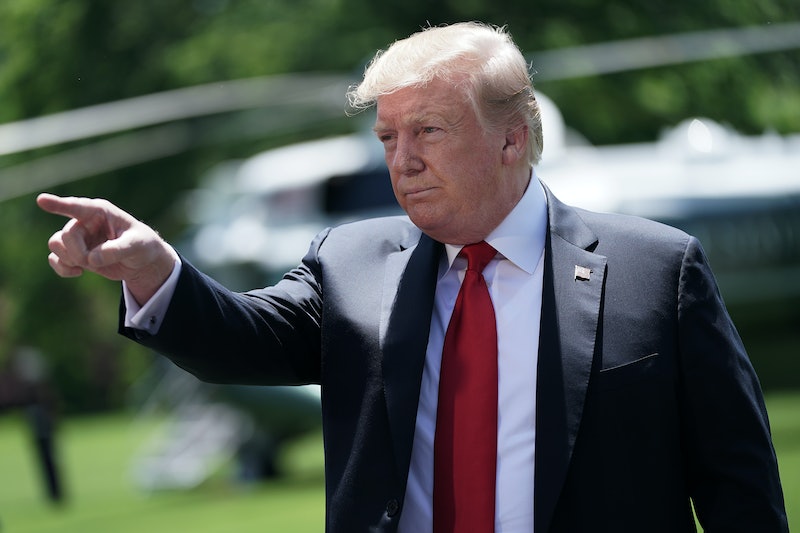 While speaking to reporters before boarding Marine One on Friday, Trump said his administration was looking at "a lot of different pardons for a lot of different people." The president went on to say that some of the soldiers accused of war crimes "are people that have fought hard, long."

"You know, we teach them how to be great fighters, and then when they fight, sometimes they get really treated very unfairly," he continued. "We're going to take a look at it. I haven't done anything yet, I haven't made any decisions. There's two or three of them right now. It's a little bit controversial."

According to The New York Times, Trump is believed to be considering pardoning Special Operations Chief Edward Gallagher, a Navy SEAL awaiting court-martial on charges of shooting unarmed civilians and fatally stabbing a teenage enemy captive in Iraq in 2017, and Maj. Mathew Golsteyn, a former Green Beret facing charges of premeditated murder after he admitted to killing an unarmed Taliban bombmaker in Afghanistan in 2010. The paper also reports Trump is considering pardons for a former Blackwater security contractor convicted of shooting dozens of unarmed Iraqis in 2007 as well as a group of Marine Corps snipers charged with desecrating corpses via urination.

The president may also be considering issuing a pardon to Clint Lorance, a soldier convicted of murdering three Afghan men in 2012, Vox has reported.

Trump's decision to mull pardons for soldiers accused of war crimes have frustrated some. Buttigieg, who served with the Navy reserve in Afghanistan, has argued that pardoning war criminals would have significant consequences. "Pardoning war criminals, after or even before they have been tried by a jury of their military peers, would undermine order and discipline, corrode the foundation of American moral authority and put future troops at risks," the 2020 Democratic candidate tweeted Saturday.

On Sunday, Buttigieg reiterated his argument during an interview on ABC’s This Week, saying troops were protected "morally and physically" by the knowledge that military justice will hold soldiers accountable. "For a president, especially a president who never served, to say he's going to come in and overrule that system of military justice undermines the very foundations, legal and moral, of this country," he said.

But Buttigieg isn't the only former military member to have spoken out against Trump's proposed pardoning. In an op-ed for TIME magazine, Retired Admiral James Stavridis, a commander of the Marines charged with urinating on the corpses of dead Taliban members in Afghanistan, said it would be "a mistake" for Trump to inject himself into the military justice system.

He argued that Trump would undermine military standards and relations with allies while likely fueling enemy propaganda and combat tactics. "This kind of pardon disrespects every single one of our soldiers, sailors, airmen and Marines who follow the strict standards of the Code of Conduct," Stavridis wrote.

It's unclear when Trump will make up his mind on whether or not he'll pardon any of the accused soldiers he's reported to be considering. On Friday, he told reporters at the White House that it was "very possible" that he'd "let the trials go on" and "make my decision after the trial."