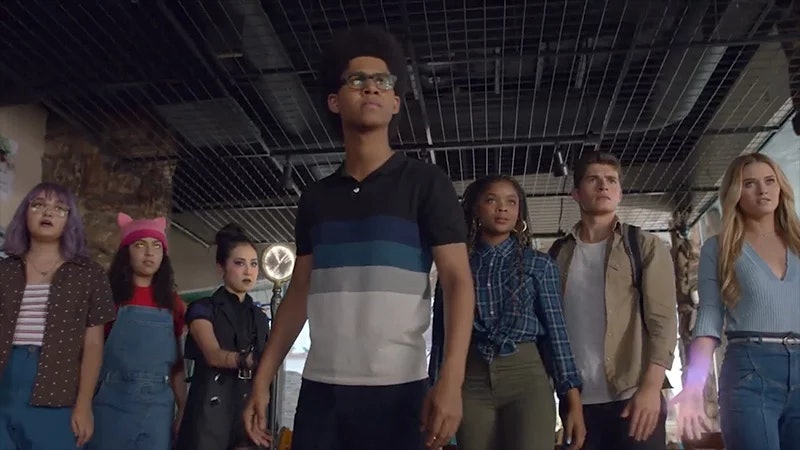 Finally fulfilling the title of their own show, the children of Pride are on the run — and adding new allies to their ranks. But who is Xavin in Runaways? The comic book origins of this character are fascinating, and make the hero one of the most promising additions to the Marvel Cinematic Universe in a long time. The Hulu series may be only distantly related to the big screen offerings of the MCU, but it's proving itself to be by far the most inclusive branch of the franchise with the late-season addition of this gender-fluid character.

Played in the series by Clarissa Thibeaux, the decision to bring Xavin from the page to the screen is one that both fans and cast members have been hoping for from the start. When asked by Elle what she most wanted in Season 2, Runaways star Virginia Gardner — who plays rainbow-powered Karolina Dean — listed just one thing: Xavin. "I’m interested to see if they could bring a character like that into the show next season," she told the magazine. Challenge accepted.

In the comics, Xavin is a prince of a race of shapeshifting aliens called the Skrulls, born to Prince De'zean of the Skrull Royal Family on the planet Tarnax VII. When Xavin's father attempted an invasion of Earth, Frank and Leslie Dean put a stop to it by promising their daughter Karolina to De'zean's son Xavin, and giving them the coordinates of Majesdane, the home planet of the Skrulls' mortal enemies. (Karolina is Majesdanian, which is where her superpowers come from.)

Eventually, Prince Xavin left Tarnax VII to seek out Karolina in an attempt to put a stop to the hostilities between between the Skrulls and the Majesdanians. Upon finding that Karolina was attracted to women, Xavin promptly shapeshifted into the form of a woman. From then on out, Xavin went by the pronoun they/them, and alternately appeared as a man or a woman depending on the situation — preferring their female form (especially around Karolina), but occasionally using their male form depending on the mission or their mood. Despite their match having been arranged for them by their parents, Karolina and Xavin fell in love, and Xavin became an integral member of the team.

The addition of Xavin to Runaways will signify a quantum leap forward for inclusion in the MCU… but if it sounds too good to be true, then know that Xavin's presence might come at a steep cost. In the comics, Xavin's storyline includes a major setback for the team: during a mission in which Xavin and the rest of the Runaways went to rescue Molly from Alex's evil father Geoffrey Wilder, Gert was tragically killed, transferring her psychic connection with Old Lace to Chase before she passed.

For her part, Gert's portrayer Ariela Barer told fans on tumblr that "Gert dying" was one of the storylines she most looked forward to the show adapting at some point. So, will Xavin's arrival mark the beginning of the end for Gert? If so, hopefully the series will also eventually get around to the comics' resurrection of Gert — although things between her and Chase would sadly never be the same after that tragic event.

Xavin's storyline doesn't end too happily, either. Eventually, the Skrulls do manage to obliterate the planet Majesdane, and a troop of furious surviving Mjesdanians (known as the Light Brigade) come to Earth looking for Karolina to make her answer for her parents' treachery. In an effort to protect their beloved, Xavin shapeshifts into Karolina's form and allows themselves to be taken captive instead, and was last seen being taken from Earth in Majesdanian custody. What's next for the character? Maybe Runaways will resolve the question of Xavin's ultimate fate.

Xavin wasn't the first gender-fluid or trans superhero to be introduced on the pages of Marvel Comics… but they will be the first to make the leap from page to screen. Watch Season 2 of Runaways, on Hulu now, to witness the character's exciting introduction to the franchise.