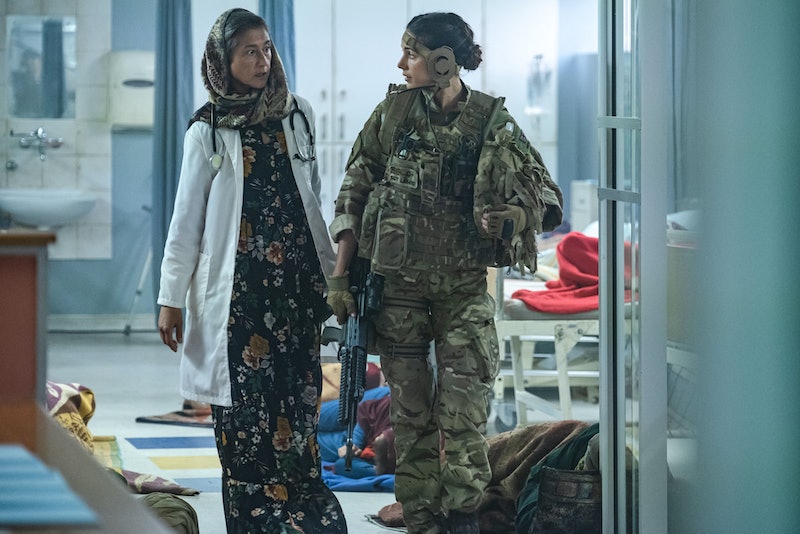 Series four may be the last time that fans of Our Girl will see Georgie Lane in action but, from the way the season is shaping up, it’s clear she isn’t going to go out without a bang. A new cast of characters and a brand new mission to protect medical administrator Dr Bahil has given the series a totally fresh feel. But who kidnapped Dr Bahil at the end of episode two? The almost successful Operation Homeward Bound was supposed to protect Lane and Dr Bahil (played by Badria Timim) as they embarked on an ambitious outreach programme to protect all of the children in the region. However, it left Dr Bahil more vulnerable than ever.

It’s impossible not to be totally gripped by Our Girl. With an explosion ending the first episode and a kidnap in the second, we're already hooked.

Lane and Dr Bahil's relationship has been fraught throughout the series but Lane fought to join Dr Bahil on the outreach programme, insisting a woman should be by her side to complete the work. As a result, 2 Section set out to support them, hiding in the mountains and watching their every move in Operation Homeward Bound. However, as Prof (played by Nico Mirallegro) noticed they were being followed by armed men and Lane and Dr Bahil were guided into a house things started to turn south.

The second episode ended as Lane put Dr Bahil in the back of a car to protect her from gunfire only to realise that it had been hijacked and Dr Bahil’s kidnapped. While there’s no confirmation who Dr Bahil is kidnapped by at the end of the episode, there are a few clues we could look at.

Due to the fact that she’s running in the election in the place of her former husband and is on a mission to medically protect the people in her region, Dr Bahil’s a key target for Aatan Omar, the leader of the terrorist network that killed both her husband and Lane’s fiancé Elvis.

Dr Bahil is a key target for Omar as she ardently speaks out against his influence in the region. She’s a threat to him, which puts her in a lot of danger. That’s why it’s fairly safe to assume that, when she’s whisked away at the end of episode two, Omar is somehow involved.

She may be a new character but Dr Bahil is going to be central to series four of Our Girl. If you want to find out what happens next you can watch it on Tuesdays on BBC One at 9 p.m.