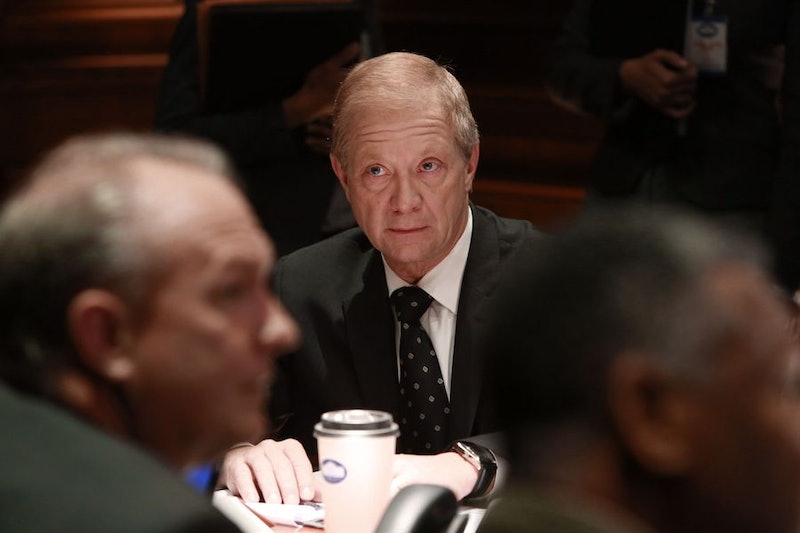 Scandal can never start things off without a bang! In the first 15 minutes of the Scandal Season 6 premiere, Mellie Grant lost her bid at the presidency (it was just too real for me there), Frankie Vargas nabbed the top spot in the country, and then a sniper opened fire at Vargas’ rally, shooting him three times and killing him. What happens now? Well, Olivia is convinced that Cyrus killed Frankie Vargas on Scandal, and I have to say, she’s probably right. Old Cyrus habits die hard.

Cyrus did have everyone fooled for a second there, too—he mourned hard, almost in a catatonic state, so much so that Olivia was immediately softened and convinced that he couldn’t have been responsible for the lone wolf shooter. Luckily, one of Frankie Vargas’ staffers sent a message to the FBI tip line after Vargas was shot, saying that she was very sure it was Cyrus Beene who organized it. Olivia should know better than to go against her cut, because this is exactly the kind of thing that Cyrus is capable of and has always been capable of on Scandal. The man wants power—that’s all he wants—and he’s killed before to get it. Now he’s a heartbeat away from being the most powerful man in the world and we’re expected to think he’ll just keep his hands in his pockets? Nah. That’s not how Cyrus Beene plays things.

Fitz, though, has no idea that Cyrus is probably responsible for Vargas’ death, and now he’s bestowed on him the highest honor in the land. It’s not like Fitz can take it back—he’s already announced it to the country. Olivia has about six weeks until the Electoral College officially makes Cyrus the President of the United States, so let’s hope her investigation can get a move on.