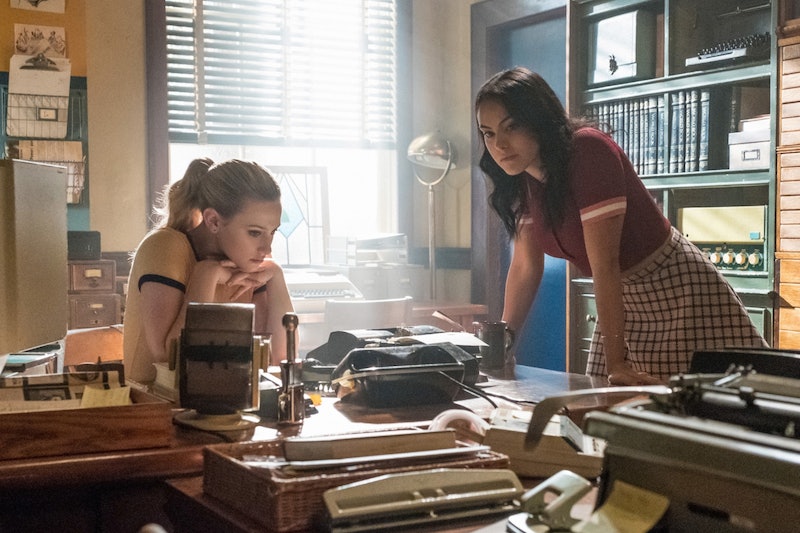 From Gargyole Kings to levitating babies, Riverdale is teeming with spooky content, and yet the show is taking a brief week-long hiatus on the most haunting night of the year. Why isn't Riverdale on this week? To celebrate Halloween night, the CW is bringing on the supernatural.

No, not Supernatural itself, but close. In Riverdale's time slot on Oct. 31 will be a repeat episode of Charmed, followed by a repeat of Legacies' series premiere. This may seem like a foreign concept to fans born and bred on streaming, but the CW is airing something we used to call "reruns" so that you won't miss any new episodes while you're out trick-or-treating. That said, if you're staying in for Hallows' Eve, what better way to spend the night than watching a witch and vampire-packed double feature?

If you're really craving the Riverdale vibe and just can't hold out for another seven days, you can also head two towns over to Greendale and stream Chilling Adventures of Sabrina on Netflix. The teen antics, campy thematics, and dark, spooky undertones are about as close to Riverdale as you can get without, ya know, actually watching Riverdale (though the show's first two seasons are also available on Netflix, so you could opt to re-watch those, too).

Though Riverdale's absence isn't part of any official movie marathon or Halloween special, it does seem like it's related to the holiday. After all, you know the CW loves all things Halloween. Never forget the dancing pumpkin:

And after one empty Wednesday, Riverdale will be back on Nov. 7 with "The Midnight Club," a flashback homage to Breakfast Club that will guest-star Anthony Michael Hall and explain why all the Riverdale parents are so skittish about the role-playing game their children have recently taken up. As the official description for the episode reads:

When Betty confronts Alice about Griffins and Gargoyles, Alice has no choice but to come clean about how she, along with a young Fred, FP, Hermione, Hiram, Sierra, Penelope, and Tom played the game in the early 90's — and how a shocking mystery has been plaguing them all ever since.

Need something else to tide you over? Mama Riverdale will provide. Why it took this show so long to dip into the deep, dark pool of Stephen Sondheim, who knows, but here's Josie singing "Another Hundred People" from Company in a clip recently shared to the show's YouTube account. It doesn't appear to be from an upcoming episode — just an exclusive online performance — but it's nonetheless a fitting (and fabulous) placeholder.

So Riverdale is not on this week, but not only does the CW have their reasons, it won't be long until it's back on-screen. Whether you take the off week to catch up on Sabrina or crack down and really figure out whether or not Griffins and Gargoyles is some kind of fantasy Jumanji, Riverdale will be back before we know it, and with a much-anticipated episode to boot.