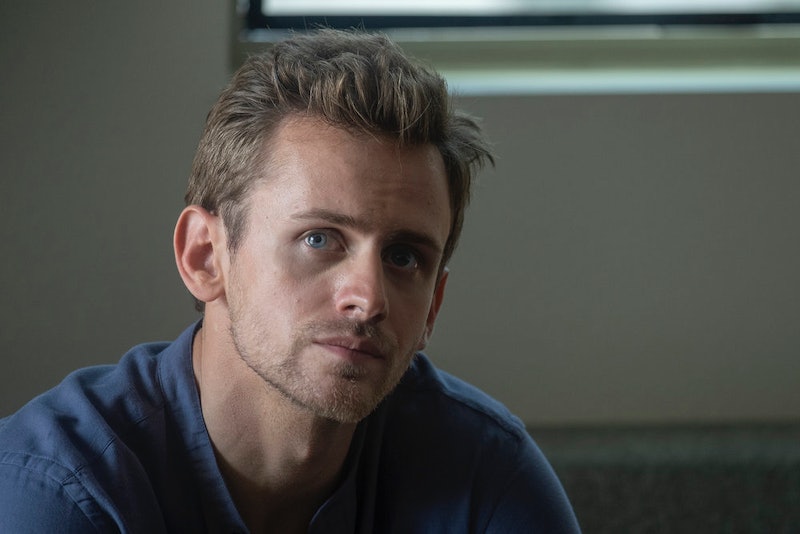 Spoilers ahead for This Is Us Season 4, Episode 1. One of the most interesting aspects about This Is Us is the show's ability to transport its viewers to various points in the past, present, and future without any of us entirely knowing which of the three timelines we're experiencing. So when the grown up version of Kate and Toby's son was initially introduced, no one knew who he was. But who plays adult Jack on This Is Us is actually even more important than the character himself, particularly because the role is allowing him to make television history.

The actor's name is Blake Stadnik, who is legally blind in real life, making him the one of first visually-impaired actors to play a major character on a network television show like NBC, according to Entertainment Tonight. But while he may have seemed like a natural on-camera, his role on This Is Us serves as Stadnik's first ever on-screen credit.

Series creator Dan Fogelman knew that finding the perfect person to play such an important member of the Pearson clan would be tricky, but Stadnik checked every box he was looking for and instantly blew him away in regards to his undeniable talent as an actor and performer.

"He’s exceptionally talented," Fogelamn told Entertainment Weekly during a recent interview. "It was important to us to not cast a sighted actor here. It was also very important to us that we have somebody who can hold the screen and sing, and Blake just checked a tremendous amount of boxes."

Throughout the episode, viewers watched as Toby and Kate's son broke a plate, fell in love, got married, and realized he was going to be a father. In the final few moments, he also performed at a huge concert venue — indicating that he was able to live out Rebecca and Kate's dream of becoming a professional musician. Carrying such a significant portion of the show's plot would be stressful for anyone, yet Fogelman was impressed by how composed Stadnik remained throughout the whole thing.

"He was being asked to do a tremendous amount of high-degree-of-difficulty stuff very quickly on a very, very high scale of season premiere of a very popular show and carrying a lot of weight," Fogelman explained to EW. "And he was one of those guys that was just never flustered by it. Never overwhelmed by the moment."

This includes when they had to shoot the entire concert scene during an intermission at the Greek Theatre in Los Angeles. "We got the audience to stay in their seats. [Stadnik] had to go out there on his own, and he got one and a half takes through the song," Fogelman recalled. "We were supposed to have 10 minutes and we realized we buy some goodwill with the band and the crowd if we just cut off after five because Blake nailed it and we just pulled him off."

Prior to this, Stadnik's theatrical credits include starring in productions of Newsies, Sweeney Todd, 42nd Street, and a Colorado-based showing of Guys and Dolls. (Though Fogelman admitted to ET that they pulled him from that local production in order to start filming.) Fogelman also confirmed to the outlet that another appearance of Adult Jack "will be returned to" this season. So fear not — Stadnik's This Is Us journey is only just getting started.

More like this
'Bridgerton' S3 Teases Exciting Social Season For Penelope Featherington
By Bustle
Taylor Swift Fans Sue Ticketmaster For The Eras Tour “Ticket Sale Disaster”
By Jake Viswanath
What Jen Shah's Delayed Sentencing Could Mean For The 'RHOSLC' Season 3 Reunion
By Brad Witter and Jake Viswanath
The First Trailer For 'That '90s Show' Includes So Many Nods To The Original Series
By Jack Irvin, Alyssa Lapid and Grace Wehniainen
Get Even More From Bustle — Sign Up For The Newsletter