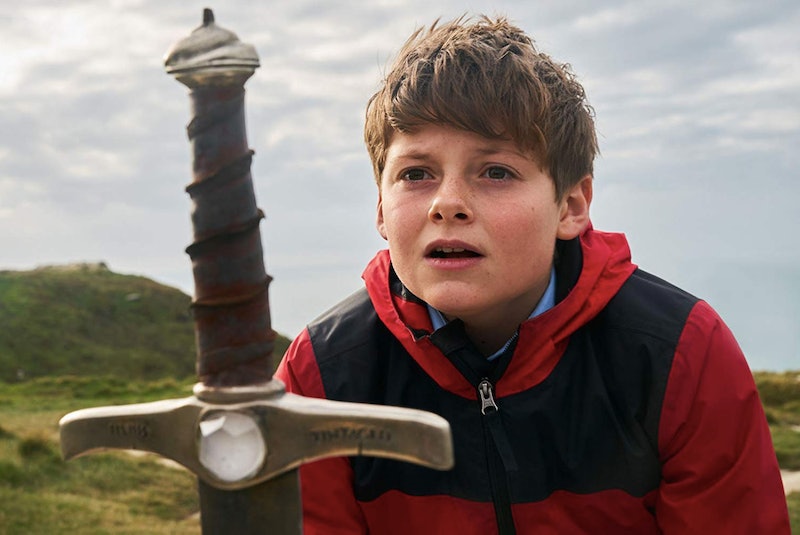 There are plenty of films about Excalibur, King Arthur’s legendary sword that would make anyone who can successfully pull it out the “true king.” And upcoming fantasy flick The Kid Who Would Be King, out Jan. 25, puts a fresh, modern spin on the story. In this take on the legend, Alex (Louis Ashbourne Serkis) is believed to be an average kid, until he successfully wields Excalibur, accepting his new responsibilities as the heir to the throne. You might not know who newcomer Louis Ashbourne Serkis is, but the actor is following his famous dad's footsteps.

That’s right, Louis Ashbourne Serkis is the son of Lord of the Rings star Andy Serkis. His first role was in 2014, where he appeared in an episode of British crime drama Endeavour. He also had a small role in Tim Burton’s Alice Through the Looking Glass, playing the young Mad Hatter.

But it wasn’t until 2017 that his acting career began to flourish. The 14-year-old landed a recurring role in BBC period drama Taboo, created by Tom Hardy and his dad, Chips, about an adventurer who returns to England from Africa after more than a decade with 14 stolen diamonds, seeking vengeance after the death of his father. Louis Ashbourne Serkis plays Hardy’s character James’ half-brother, Robert.

And much like his dad, who has become an iconic voice actor, Louis Ashbourne Serkis has plenty of experience in that department, too. He voiced Noddy in Noddy, Toyland Detective, the latest take on the beloved British character that features him solving mysteries in Toyland. He also voiced and performed the movements for Bhoot in his dad’s recent Netflix adaptation of The Jungle Book, Mowgli: Legend of the Jungle. This marked the first time that he worked with his dad, starring alongside an A-list cast including Christian Bale, Cate Blanchett, Benedict Cumberbatch, and more. And his role as Bhoot wasn’t easy, considering the pup faces a tragic fate at a pivotal point in the film.

But the young actor was happy to have his dad as director, guiding him through the scene. In an interview with PremiereScene, he talked about what it was like to explore that aspect of his character with his dad. “Obviously when you’re leading up to a sad scene, you normally come into work sort of quite downbeat, and when you’re in the scene, he said ‘Alright Louis, think about something that’s happened’ and then you think of it and you play with it and act out the scene,” said Ashbourne Serkis.

Louis Ashbourne Serkis has just been acting for five years, but he's already proving to make a name for himself. His role in The Kid Who Would Be King marks an important first for him as the star of a film, and chances are we’ll get to see him lead many more to come.