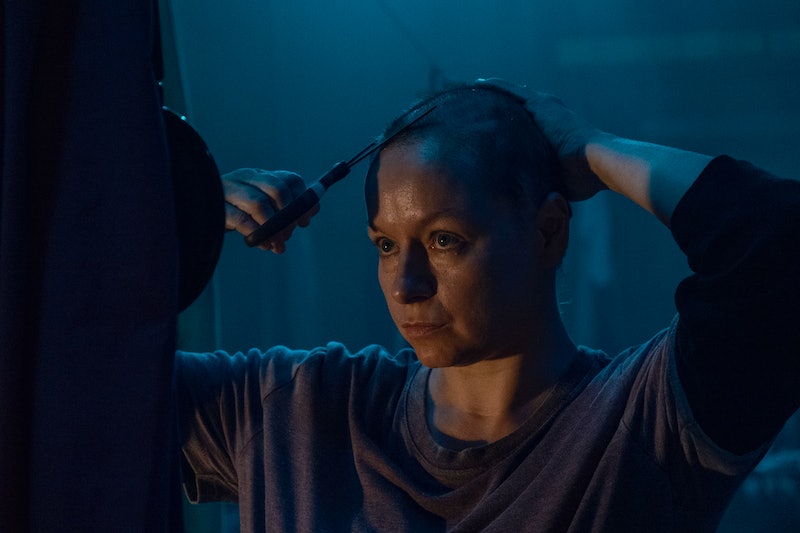 The Walking Dead has introduced many villains throughout the years, but the leader of The Whisperers already feels like someone who could make even the likes of Negan cower in fear. And while there's still a lot to uncover about the character herself, knowing who plays Alpha on The Walking Dead will help make fans even more excited for the actor's continued presence on the show. Alpha is played by none other than Samantha Morton and if the name itself doesn't sound familiar, her face (when it isn't being covered with a zombie mask) is sure to spark some recognition among many — especially for those who follow the Fantastic Beasts franchise.

Long before Morton began walking among the dead, she's starred in numerous other projects both on the big and small screen. But if you're wondering how she's already able to make such a convincing villain on The Walking Dead, that's because she's had some practice at playing evil characters. Most notably, Morton portrayed Mary Lou Barebone in Fantastic Beasts and Where To Find Them as an anti-magic No-Maj who was both verbally and physically abusive to Credence. She ended up paying the ultimate price for her actions in the end, though fans will have to wait and see if the same can be said for her Walking Dead counterpart.

In addition to her presence in the Harry Potter universe, Morton has many other impressive acting credits to her name, including the Hulu series Harlots, where she played Margaret Wells, Max & Ruby, where she played the titular star Ruby, and Band of Gold, where she played Tracy Richards. The list goes on and on, so if you ever have some time be sure to check out her IMDB page, which only helps to further solidify her acting talents.

Interestingly enough, though, Morton's shaved head on The Walking Dead (which was done with her real hair, by the way) wasn't the first time she time she pulled off such a fierce look for the sake of art. Morton also played Agatha in Minority Report and rocked a very short hairdo there as well. And it was a look that Morton was willing to reprise in order to show viewers the metamorphosis of sorts that Alpha went through during the apocalypse.

"Oh, I loved it. It just feels very real, and what the audience is seeing is real, you know?" Morton told Entertainment Weekly during a recent interview regarding Alpha's drastic change in hairstyle. "She’s metamorphosing from a caterpillar to a butterfly, but not the nicest butterfly, you know? She’s completely changing who she is, and whether that’s trauma and something to do with the brain, or that she just found her true self that she’s able to be because of what’s happening to the world."

Up until now, Alpha has only been shown in flashbacks from her daughter's memory, but on Sunday fans will get to see the "true self" she has become and just how far she's willing to go in order to get what she wants. Hilltop's world is about to be turned upside-down.