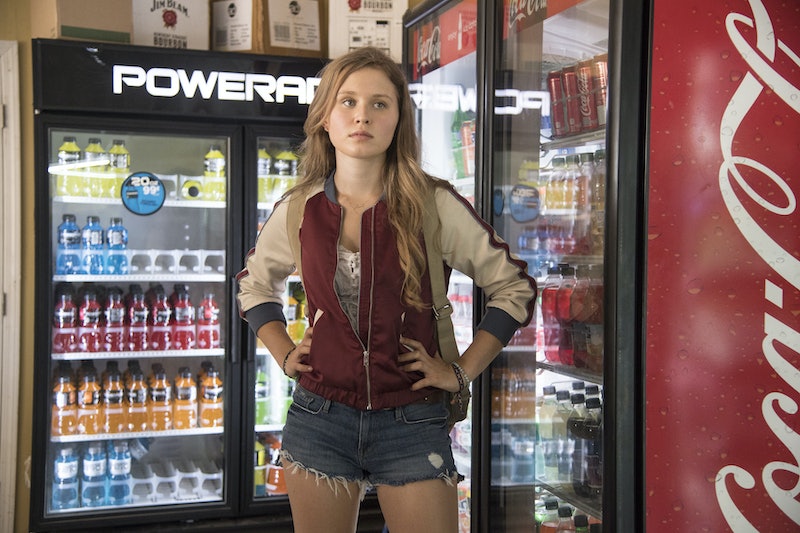 Amy Adams and Patricia Clarkson are the longstanding show business staples giving Sharp Objects, the HBO adaptation of the Gillian Flynn novel, its star power — but there's another cast member who's new on the scene but just as important. Sinister questions linger everywhere as Adams' Camille Preaker returns to her hometown to investigate a series of child murders. But surrounding Camille's young half-sister, Amma, is a brand of mystery all its own. Judging by her performance in the miniseries' premiere, Eliza Scanlen, who plays Amma on Sharp Objects, seems up to the task of unfurling it.

The 19-year-old Australian actor's IMDB page lists only four projects under her belt prior to Sharp Objects, all of which have occurred since 2015, and which include a couple short films as well as a stint on the long-running Australian soap opera, Home and Away. 19-year-old Scanlen hasn't yet reached the icon status that her onscreen family members have, but the role of Amma is a great place to start.

Scanlen's social media is pretty sparse — only seven total photos appear on her Instagram page, and she doesn't even seem to have a Twitter account (though a newly created fan account in her honor is gaining traction). But her Instagram feed does feature a selfie shared with Adams and Clarkson, which on its own makes her online presence about 500 times more impressive than any of ours.

Amma is a character who acts like a sweet, naive, and angelic teenager while under the watchful eye of her and Camille's mother, Adora (Clarkson), but who has a troubling dark streak that's exhibited when she hits the town with her friends. As Camille interviews locals, schmoozes with investigators and uncovers some trauma from her own past, Amma's presence, along with her ever-changing personality, is an unsettling constant.

Scanlen told W Magazine that she and Amma aren't so different, even though the suggested darkness within her complicates things a bit. "She is like every teenager and every girl who is on the brink of womanhood, but in a more extreme sense," Scanlen said of her character in the show. "[Playing her] was about trying to find the similarities that we have and enlarging that a bit."

As a relative newcomer to the scene, it seems only natural that Scanlen would be nervous coming onto the set for Sharp Objects, but she said any worries were quickly dismissed when she saw the passion everyone involved had for the project. "I walked in [to my audition] and saw Amy there and my mind just blew," Scanlen said in the same interview. "But straight away, the facade drops and you realize that these are just people who love what they are doing and only want the best for you and the project. In the end, it is about the work."

The shock of seeing a superstar like Adams in the flesh is understandable — but it was likely even exacerbated by the fact that Scanlen was a fan of the actor's before even being cast. "I grew up watching Amy in Enchanted," Scanlen told Vanity Fair. "I was told that if you had to meet your first famous person you’d be lucky if it were Amy Adams."

She told WWD that she credits her seasoned co-stars with the way she was able to step into the role so capably. “[Adams] made it her priority to make me feel comfortable, which I found so helpful, especially coming from Australia and being only 18 and still really homesick, and unsure about who I am and what I’m doing and where I’m supposed to be going," Scanlen said. "So it was nice to have her and a lot of the cast as my guiding light, I guess, in the show.”

Amma's character is a bit of a wild card in the novel version of Sharp Objects, and she's primed to have the same unpredictable nature in the miniseries. Even just in the premiere, Scanlen nailed the ambiguity of Amma's personality, and it'll be interesting to see what more she does as the series progresses.

More like this
“The Door Is Always Open” For Another 'Breaking Bad' Spin-Off, Says AMC Boss
By El Hunt
Emilia Clarke Shares More Details About The New 'Game Of Thrones' Series
By Maxine Harrison
The Stranger Things 4 Soundtrack Spans Classic Eras & Styles
By Brad Witter
Everything To Know About The Flash Season 9
By Brad Witter
Get Even More From Bustle — Sign Up For The Newsletter